A letter of intent for job promotion is a formal document that an employee writes seeking to be promoted to a specified senior role from their current role. Often, many companies with an internal opening for promotion would ask employees to write letters of intent seeking to cover the position. This letter expresses the desire and commitment of the employee to fill the job position available in their company at their time of writing. A letter of intent for job promotion is complete if it has covered the overview of your job qualifications, career goals, and accomplishments made so far.

When a company resorts to asking employees to write the letter of intent for job promotion, it means that the promotion is pegged on the quality of the letter.

The letter carries great importance because:

Therefore, it is of great importance to be precise in writing a letter of intent for job promotion if you are looking forward to starting a new role in your organization.

How to Write a Letter of Intent for Job Promotion

Writing a letter of intent for job promotion is a rigorous process that must include the following elements:

Start with your intention

You need to know the heads of departments and hiring managers are often time-bound when reading letters, thus the need to start right away with your intention of the letter of intent for job promotion. The beginning of the letter should introduce you (write your official name) and state the job position that you are applying for. You might need to include the department that you are currently in and the role you have in the department if your organization is big and has various departments.

The next thing to mention in your letter of intent for job promotion is to show how your qualifications fit the needs of the position that you want. You might want to include your education and work history or any other credential that can help in advancing your desire to get the role. This extra information makes it easy for employers to understand your work history without researching a lot.

Now, it is time to provide finer details of what you have accomplished in the organization since you joined. Most companies prefer using numbers to indicate performance. Therefore, if you can quantify some aspects of your accomplishments, do so at this stage. For example, you might state that you oversaw a digital campaign that improved conversion rates by 65%, which translated to an increase in the annual profits of the company by 3%. Think deeply about how you can quantify your achievements in your letter of intent for job promotion.

Describe why you want the job

At this stage of the letter of intent for job promotion (near the middle to the end), you should explain your career plans and how they are related to the new position that you are seeking.

Tell how you’ll benefit the company

This part of the letter of intent for job promotion should focus on the company and how it stands to gain with you in that role. Tell the employer how your new position is aligned to the company’s goals and how you can help them achieve these shared goals. If you are explicit about sharing these benefits, you can win the position against your competitors.

Close on a positive note

Be positive at the end of the letter of intent for a job promotion. You might want to thank your employer for taking the time to consider your application. You can also add a gentle reminder that you are looking forward to hearing from them.

[Name of the hiring manager]

[Name of the company]

[Address of the company]

[The first sentence should highlight your official name and the position to which you are applying for. The proceeding two sentences should state an overview of your skills & qualifications and career achievements. End this paragraph with a supporting claim to your previous statements]

[The second paragraph states your reasons for seeking the promotion]. The first sentence should show how your current role has sharpened your skills for this new role. The proceeding two sentences should explain why you decided to apply for this role. End the paragraph with an assertion of how this new role will support your career goals.]

[The closing paragraph should show how your new role will be of benefit to the company. Other sentences should express gratitude to the employer for considering your application. End the letter positively, politely letting the employer know that you are awaiting a response.]

Following are some samples for better understanding:

My name is Andy Williams and I would like to apply for the lead digital marketer position in the marketing department. Over the last three years, I have developed more than 100 online marketing strategies targeting small business retailers, with a 87% approval rate for the strategies. I have gathered enough experience to steer a marketing team, having been team leader in my group. I believe I am an ideal candidate to fill the new role, which is a step up from my current role as a digital marketer.

I am ready to embrace new challenges that will sharpen my skills and develop me wholly as aligned in my career goals. I know I can handle huge workloads and lead teams of writers. The digital marketing team will support me in my new role as I have already led various teams within this department, earning their trust in me as a dependable leader.

If I am selected for this position, I will be able to help the company deliver its promise to its growing clientele of efficient digital marketing. I will provide clear instructions to my team members to adapt to the new digital marketing techniques that offer great results.

My name is Sarah Phillips and I am applying to be the head of the department in production. Over the past seven years, I have gathered unmatched experience in the production department, having been responsible for the production of more than 10 tons of milk, which is has enabled the company to surpass its demand of milk production by 9%. I have gathered experience and creative ways of monitoring production. This new role will set me on the right path to achieving my personal goals, which have been developed by my current role as a production officer.

I am ready to meet the new challenges that will sharpen my skills and elevate my services in the industry. I know I can handle complex production tasks. The team that I am working with already believes in my leadership, which has been developed through the personal initiative of coaching new employees in the department.

If I am chosen for this position, I will work tirelessly to recreate new production targets for the company and expand our supply in new markets. I will be a role model in the production company, steering a sense of responsibility among team members. Thank you for your time, and I am looking forward to hearing from you.

How to Ask for a Promotion

In a fast-paced working environment, job promotions just don’t land on your desk; sometimes you might be forced to ask for them. Since job promotion means a lot to you and you need it for career progression, you must know how to ask for it, lest you lose an opportunity to be promoted.

There are four basic steps that you should engage in when asking for a promotion:

Step 1: Know when to ask

Timing is a valuable asset that can get you a promotion in your workplace. The idea is to know exactly when to write ask for a promotion. An ideal time for all asking for a promotion is when you are sure the request will receive a kind consideration from your employer.

To ensure this succeeds, follow these three tips to guide your chances of winning a job promotion:

Many formal organizations conduct an annual performance review. If you send your letter of intent for job promotion in advance, your line manager can consider you for a senior role in the organization.

Step 2: Do research on your worth

You need to know if you truly deserve the promotion. You can do this by analyzing your skills against the market demand. You can use readily-available tools to help you determine the average pay scale for people with your skills and training within your location. This step calls for you to be pragmatic about your quest to get a job promotion. Sometimes, you may find that your current salary matches or exceed your training and skills. In such cases, you have no reason to apply for a job promotion.

Step 3: Write a letter of intent for job promotion

Once you have analyzed your skills and found that it is the perfect time for you to seek a job promotion, you should write a letter of intent for job promotion. This letter needs to be clear, with a precise self-introduction and reasons for requesting the job position. Don’t assume that your boss knows you well; you must be clear about your record of accomplishments and expertise. Let your employer get all the information about what you have achieved during your tenure at the company.

This should also be accompanied by the acquired knowledge and skills that make you suitable for the position you are applying for. Whilst it isn’t a requirement, letters of recommendation can be attached to the letter of intent for a job promotion.

Step 4: Set up a meeting with your boss

Once you have sent your letter of intent for job promotion, you will need to have a face-to-face discussion with your boss about the request that you have made. Depending on your organization’s structure, you can be called for the meeting by your employer or decide when to talk to them about it. However, you should follow up after a few days if you have not received feedback after sending the letter of intent for a job promotion.

You may be requested to provide extra evidence during the meeting. Again, you might not get feedback immediately about your job promotion application. The employer might take some time to analyze your request before deciding on it.

5 Things Not to Do to Get a Promotion

Getting a promotion is a process that is quite delicate. You might be qualified for the position but fail to secure the role because of the approach used in securing the promotion. There are five things that employees often do, which reduce their chances of not getting a promotion.

The five things that you should not do includes:

Owing to the complexity of writing a letter of intent for job promotion, you can take advantage of our templates to guide you. You simply need to download them and get started straight away. You will save a lot of time if you use these premade templates. Furthermore, they reduce the chances of erring when writing letters of intent for a job promotion. 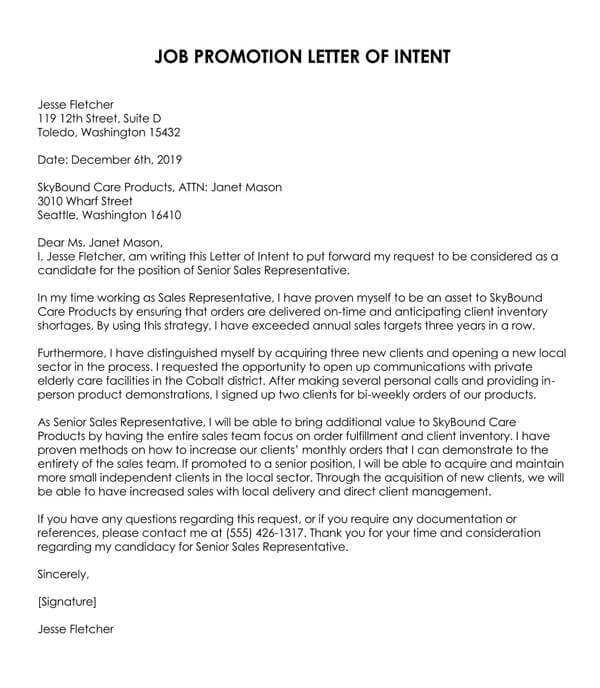 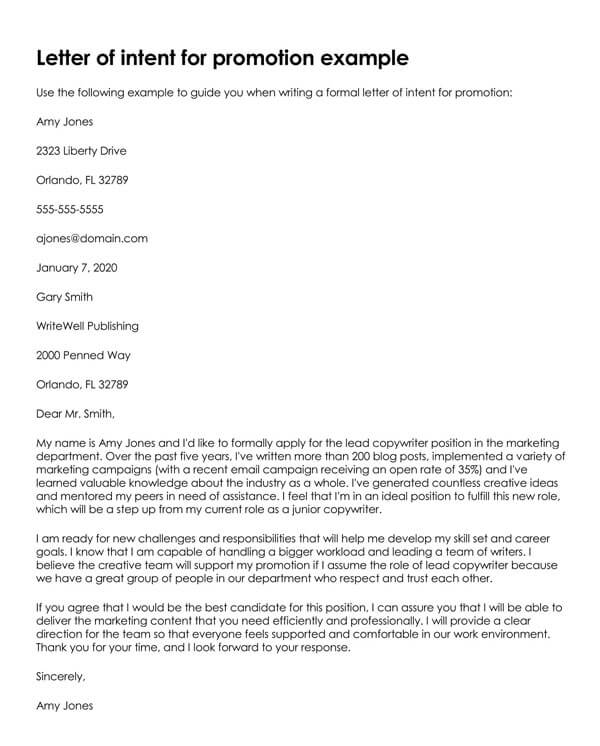 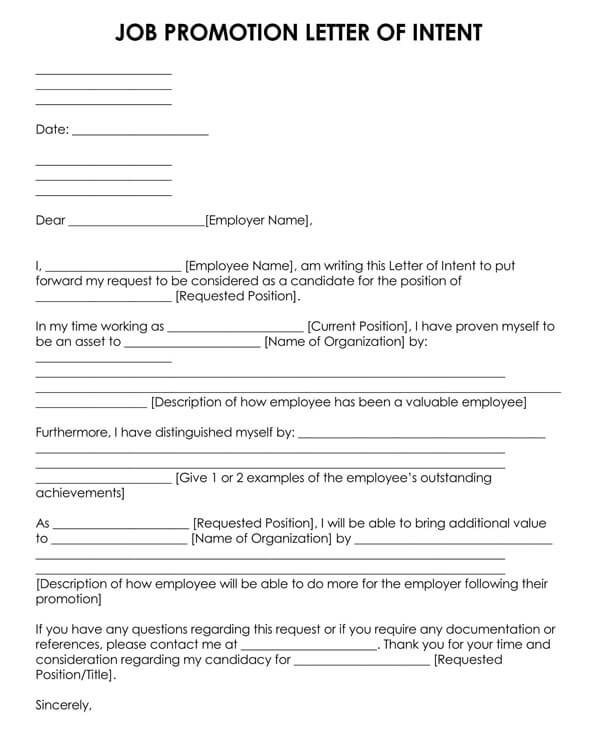 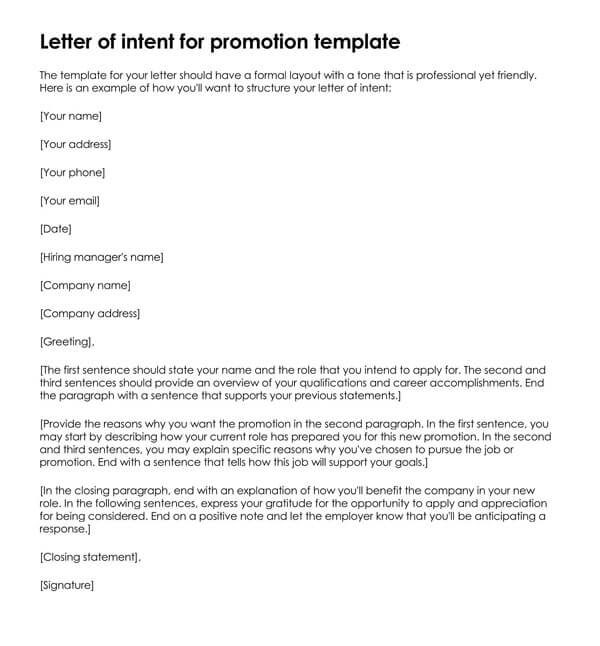 Clearly, the importance of a letter of intent for job promotion cannot be underrated. If you are looking forward to a promotion, don’t wait for fate to do it for you, initiate the process by writing a well-drafted letter of intent for promotion. If you follow the guidelines provided, you will be just a letter away from your next career step.

Can a letter of intent for job promotion be canceled?

Yes, a letter of intent can be canceled as it is not binding. Either party can decide to cancel at any time.

Is a letter of intent for job promotion a legal document?

The legality of a letter of intent for job promotion depends on how it is drafted. If it is not binding, then it is not considered a legal document, and as such, parties cannot be prosecuted for backing off.