A reference letter is a written document in which the reference provider expresses a positive opinion of a service or order. The reference letter is often sent with the testimonials which also has the purpose of recommending the recipient. However, the reference letter is more general in comparison and refers less to personal and interpersonal strengths. If a reference letter is not always required to obtain a position, it is a definite asset. Not only does it portray you, but it can also confirm an employer’s first impressions, or even influence them, and give them greater confidence in your potential.

Who can Write a Reference Letter

Basically, anyone you have worked professionally can write a reference letter: previous supervisors, former clients, even colleagues or relatives, and friends. However, not all authors have the same status and rank in the evaluation of the reference letter.

You should therefore carefully consider who you are asking to write you a recommendation.

Senior executives, as well as managers or department heads, are particularly eligible. They are not only regarded as experienced in the evaluation of skilled workers and employees but also as – halfway – objective.

Anything that looks latent lyre after letters of convenience contains too much praise or conspicuously flattery, immediately devalues the reference letter, and has virtually no effect.

Recommendation letters are harmful if:

The second point is having online references on platforms like LinkedIn, for example, rather than an actual reference letter In fact, this personnel is worthless. Firstly, because advocates only assess any competencies virtually. Secondly, because these recommendations often follow the scheme: If you recommend me, I recommend you…

If you write a recommendation, this is always a voluntary act. They are sympathetic to the recommendation and want to promote it. That is noble.

Keep in mind, however, that whenever you send out a reference letter this may fall back on you. Anyone who praises a candidate over the green clover who later cannot keep what you promise damages your own reputation.

Where are Reference Letters Used?

If a potential employer wants a reference letter, the demand for it is usually already found in the job advertisement. References are not only required for job vacancies.

Letters of recommendation are also used for:

Especially students who are still seeking a master’s degree after the bachelor’s degree are often asked by universities to submit a reference letter from former lecturers or professors. This, too, is an Anglo-Saxon tradition that is becoming more and more common in this country.

Who Needs a Reference Letter?

The reference letters are most suitable for newcomers to the profession – after all, they still have hardly any work certificates and can use such a “reference letter” to enhance their previous career path and give more significance.

Up to three high-quality reference letters can therefore significantly improve the chances of applying.

The same applies to candidates who want to apply for a promotion or to apply for a leadership position. This is where advocates help enormously, who attest to the appropriate skills.

But also former interns, trainees, or applicants who have studied or worked abroad as well as scholarship holders can document by reference letter that they have not only gained experience but also convinced their previous bosses and colleagues of their work.

Above all, freelancers benefit from references. After all, they are not entitled to a work certificate because they do not work for a permanent company. For them, however, the reference letter is called a “reference letter” or “testimonial”.

How is the Reference Letter Structured?

Because the sender of the reference acts as a kind of guarantor or appraiser, the recommendation is written in the first form, unlike the work certificate.

The reference letter is a personal assessment of the protégé by his former mentor. Such a recommendation can therefore also be personal and emotional. This makes the appreciation all the more credible.

Accordingly, this is less about a description of the job, but rather about skills and expertise, but more about the personality experienced.

Structure of the reference letter:

You don’t have to fear a secret language, as is customary in work certificates: if you can’t recommend it, you won’t. Those who respond to your request will praise you accordingly.

In general, the following applies:

Incidentally, this applies not only to the number of references but also to the extent of the praise.

Mr./Mrs .______________ still enjoys an excellent reputation among his colleagues and customers – not least because of his/her numerous constructive suggestions for solving problems at the time.

In addition to the impeccable professional qualifications, Mr./Mrs ._____________ is characterized by optimism, friendliness and teamwork. I consider him/her to be the position of ________________ and recommend him/her for employment in this area at any time.

If you have any further questions, please do not hesitate to contact us by telephone. 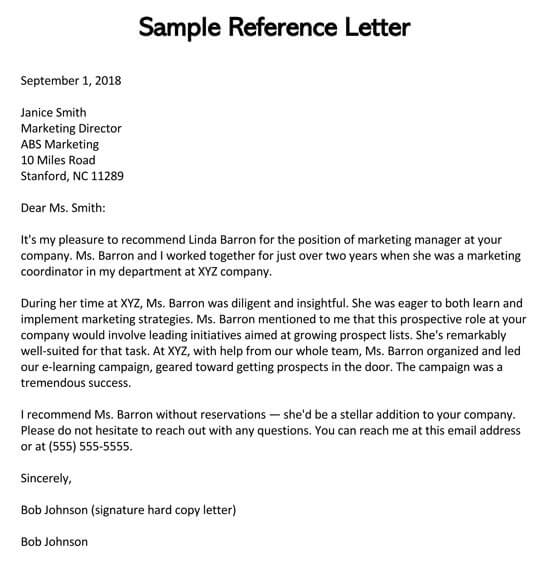 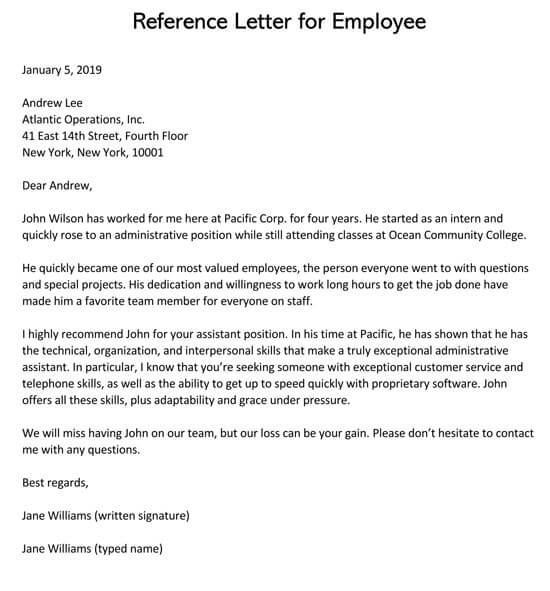 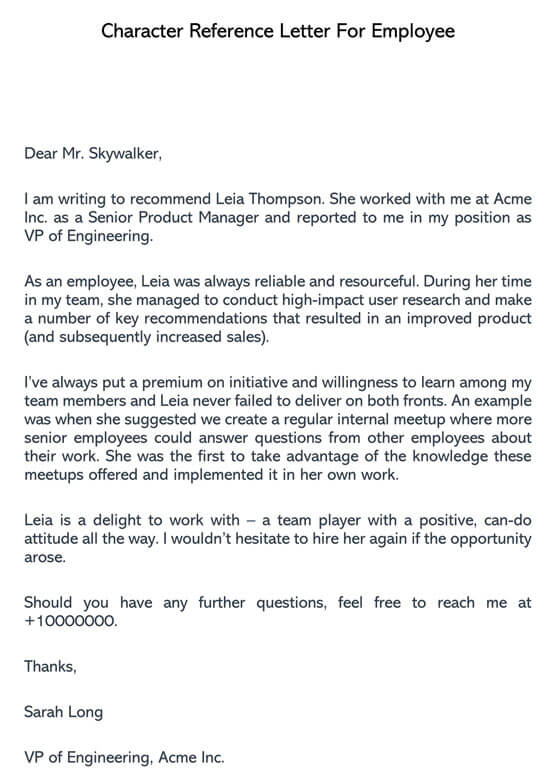 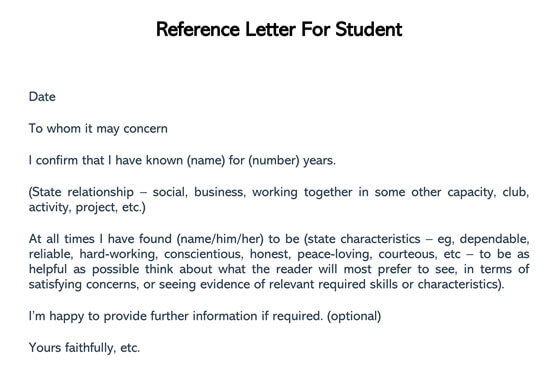 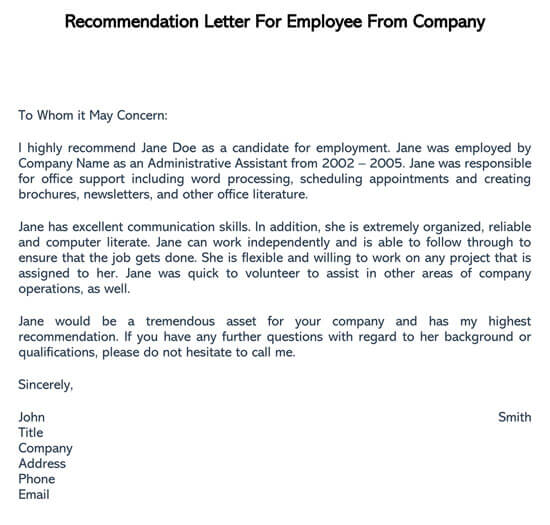 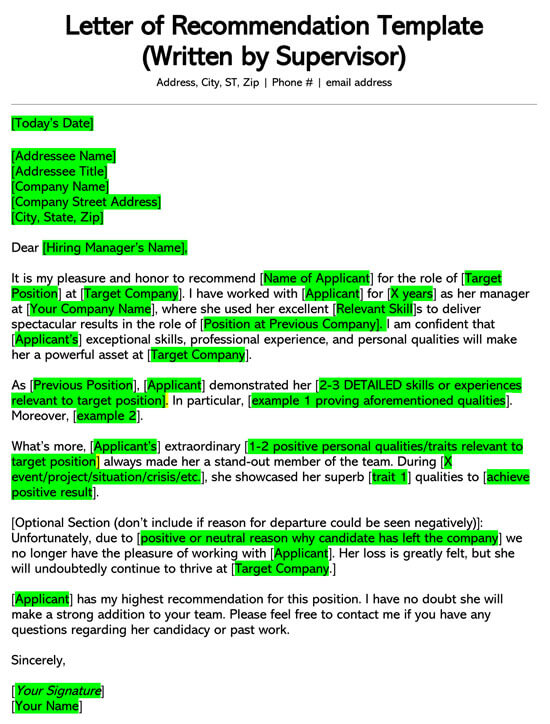 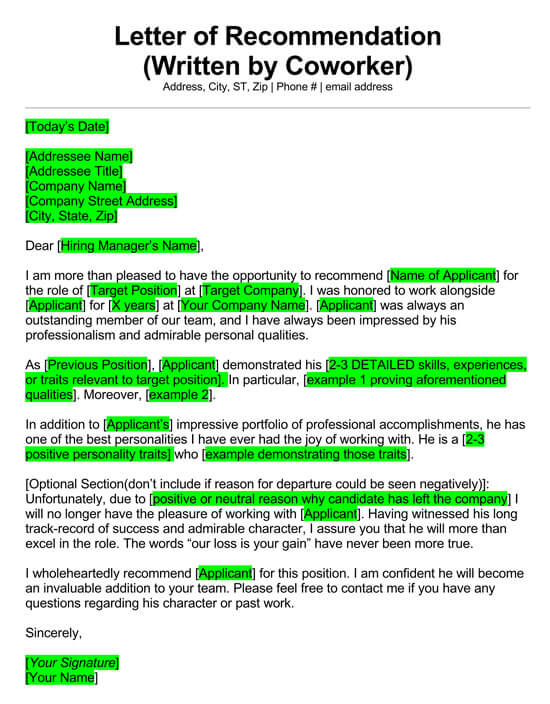 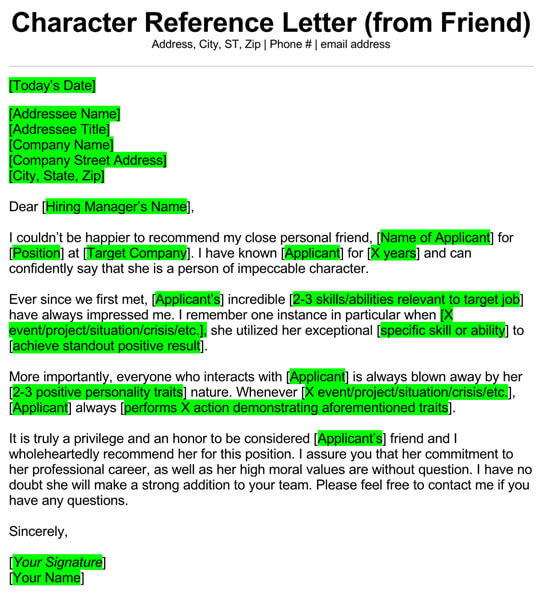 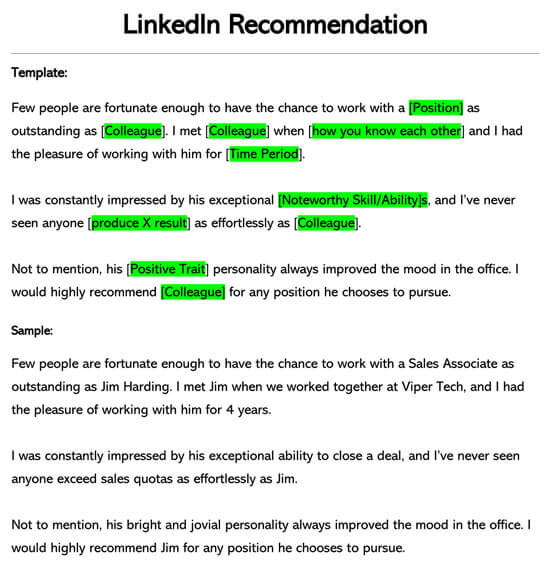 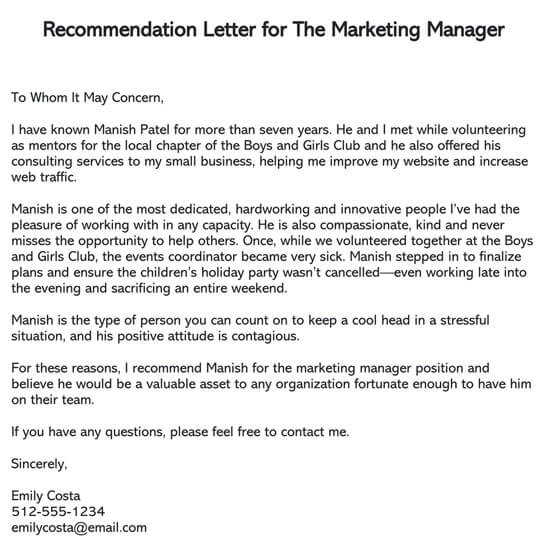 How many pages should a reference letter have?

Can I use company letterhead for the recommendation?

A reference letter is an individual recommendation statement, so it should not be on company letterhead. However, it should be addressed formally to the person receiving the reference and should also include your name and address.

Should a reference letter be signed?

A reference letter should be signed by the person providing the reference. This is often a formality, but it does reassure that this person is, in fact, the source. In addition, if there are any questions about where or how to contact this person, having the signature and contact information on hand can ease worries that might otherwise arise from an unsigned letter.

Should a letter of recommendation be typed or handwritten?

A handwritten reference letter is a more personal note that reflects your personal feelings. However, a typed letter will be easier to read and follow and can be drafted on a computer with the standard fonts. However, it can also look unprofessional if not done correctly.

To whom should a letter of recommendation be addressed?