A nursing letter of recommendation is a document used to confirm a nurse’s skill, experience, attitude, and competency.

Usually, the letter helps in convincing the recipient why they should hire the applicant at their medical facility or an undergraduate nursing program by providing examples of excellent work performance examples of theirs in their previous roles which the recommender witnessed personally.

In this article, we have provided a complete how-to-write guide along with the professionally crafted nursing letter of recommendation examples. But first, let us understand the purpose of it.

The letter can be written by a former/current employer, teacher, or colleague who has interacted with the applicant, provided they have known the applicant closely and for long enough. For this letter to be valid, the writer (recommender) should also keep into consideration the element of honesty.

There are several benefits of using a nursing recommendation letter. Mainly, the nursing letter of recommendation helps validate that the nursing applicant did outstanding nursing-related work during his or her interaction with the recommender, which shows that he or she possesses credible nursing skills and expertise that deem him or her eligible to apply for admission into the nursing school or to apply for a job ar a medical facility.

Writing a quality nursing recommendation letter raises the applicant’s chances of securing a place at the nursing school. However, in order to write a high-quality nursing letter of recommendation, the recommender should provide accurate and honest information. As a recommender, you need to request the applicant to provide you with a list of accomplishments as well as a copy of their resume and personal mission statement. Also, the applicant should include examples of their experiences and qualifications that match nursing practice.

This will help you write a detailed and more fulfilling nursing recommendation letter. Other than presenting the necessary information, the applicant should also explain to the recommender how to write the letters. Since different nursing schools have different writing formats, the recommender should be guided to ensure they adhere to the recommended format and style.

Nursing recommendation letters often provide more highlights on the applicant’s qualities and skills related to the nursing practice. As such, it doesn’t need to be as detailed as most of the nursing recommendation letters. Typically, the letters should contain a short introduction paragraph, one to two body paragraphs, and a conclusion. Since they are official letters, the recommender should always use formal language and tone.

Let’s take a more in-depth look at the paragraphs individually:

Your introduction should be brief, precise, and direct to the point. You will begin your nursing letter of recommendation with an official salutation. If you know the recipient in person, you can salute them by writing ‘Dear [name].’  However, if you aren’t familiar with the recipient, you can simply state ‘To whom it may concern.’ This should then be followed by two to three sentences containing the general recommendation for the nurse. Also, you will indicate your relationship with the applicant as well as an example of favorable interactions.

The following is an example:

Kindly receive this letter as a recommendation of Steve Jacobs for nursing admission at your school. Jacobs has worked here at Golden Home for the Elderly for two years. During this period, she demonstrated characters that I believe are in line with the nursing practice.

If you choose to use two paragraphs in the body, then the first paragraph should illustrate the applicant’s characteristics, while the second paragraph supports the assertions through real-life examples. This will help avoid repetition. Also, you shouldn’t include the applicant’s experience outside the field of nursing, as it may not count.

The following is an example:

While Jacobs was attached to our organization, it was clear that he loved her line of work. He did have not only a kind heart but also unquestionable dedication to elderly people. He provided them with tender care, which was very necessary. Due to his charismatic and charming leadership, his patients and senior staff had nothing but good things to talk about him.

Also, he is flexible and hence can maneuver his ways out of tough or challenging environments. During emergencies, for example, he was the highest level-headed since we knew he could take charge of such situations with efficiency.

In the conclusion paragraph, the recommender will once again reiterate his/her thoughts on the applicant’s abilities and qualification that makes them eligible for the nursing program. Also, you can include your contact information so that you can be reached in case more information/questions are required. Then, you will sign off with a formal closing clause.

Let’s take a look at the following example:

Jacobs is a smart and dedicated individual. Throughout my interaction with him, he has proven beyond doubt that he has ambitions for nursing care. From the way he performed his duties, he will surely excel in the nursing program. Therefore, I believe he will do well in whichever position you will offer him. If you need more information or have any queries on the applicant, feel free to reach me at [email protected]

Following are a few nursing recommendation letter samples and examples to get a better understanding of the sentence structuring and the tone of the letter:

I am pleased to write this recommendation letter for De ’Aaron Butler, who has been working with our community health organization for the past two years. As his managing nurse, I am humbled to report that our relationship with Butler was exceptional. His charming nursing skills make him be one of the most recognized nurses at our Brilliant Community Health Organization.

Having graduated with a BSN from the University of Southern Carolina, Butler meets the right academic qualification for the applied master’s program. Coupled with his technical experience in nursing, I believe he won’t be a disappointment. At our organization, Butler was good at emergency responses. Besides, he is able to work with little or no supervision. He loves his work. And that’s why our organization decided to award him the best nurse of the year 2020.

As you consider the best candidates for your master’s nursing program, I hope and believe you will consider Mr. Butler. I am confident that he will excel in that particular area. While he was among the pillars of our organization, we will humbly release him to go and pursue his further education. If you have any other questions about Mr. Butler, please feel free to contact me at [email protected]

To whom it may concern,

Kindly receive this letter as a recommendation of Ms. Lucy Bronze for the nursing management position at your health care facility. Bronze has worked under my supervision at East Brick Hospital for the past three years. She possesses the knowledge and experience that is necessary for a nurse management position.

East Brick Hospital provides health care services to the residents of Sumter, South Carolina, and its environs. As such, we handle patients of different ethnicities and backgrounds. Fortunately, Ms. Bronze had the necessary leadership qualities to handle this diverse group of patients. Also, she was kind, caring, and respectful in her undergoing. During my interaction with her, Bronze showed great empathy for the patient’s pain and suffering.

Above all, she was very dedicated to her duties.

It is because of her competence that I recommend her for the managerial position at your facility. I strongly believe beyond doubt that she will be an excellent managing nurse. Sincerely, I am sad to see such a great nurse leave our organization. If you have more questions, please do reach me at [insert your contacts].

Related: Letter of Intent for Nursing School (With Samples)

To whom it may concern,

I am writing this letter of recommendation on behalf of John Aston, a committed and experienced nurse that I have worked with for three years at Winston Medical Center. As his colleague, Aston is a person whose interest and passion in nursing are unquestionable.

During my engagement with Mr. Aston, he proved that his capability to work long hours and carry a heavy workload. He was a good communicator and coordinator. His analytical and crisis management skills made him look like an experienced nurse. Whenever Aston was in shift, patients could relax freely with confidence, knowing that they were in better hands.

As I conclude, I would want to reiterate that Mr. Aston has my highest recommendation. I am confident that being given the opportunity to pursue further education at your school will help steer his career in the right direction. Even though we will miss him at Winston Medical center, we will wish him the best of her endeavor. 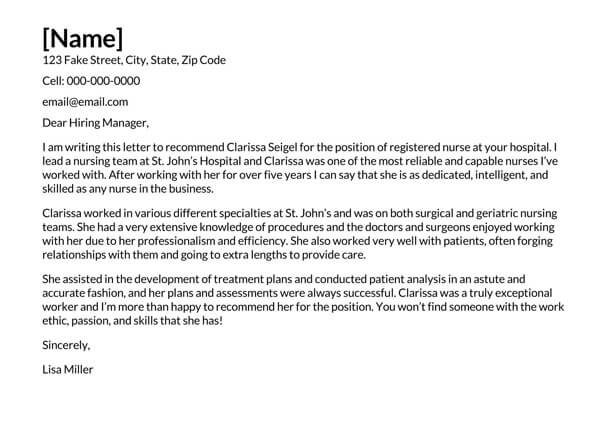 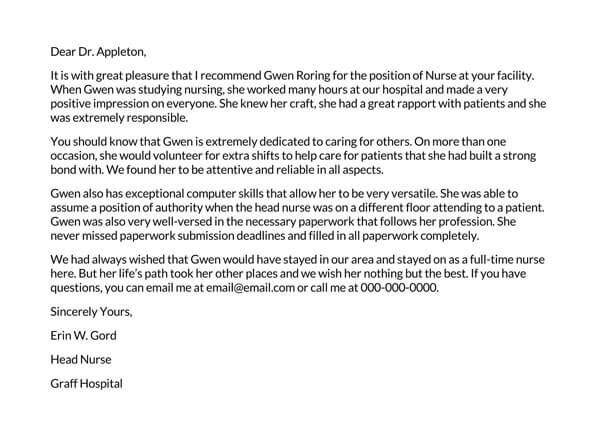 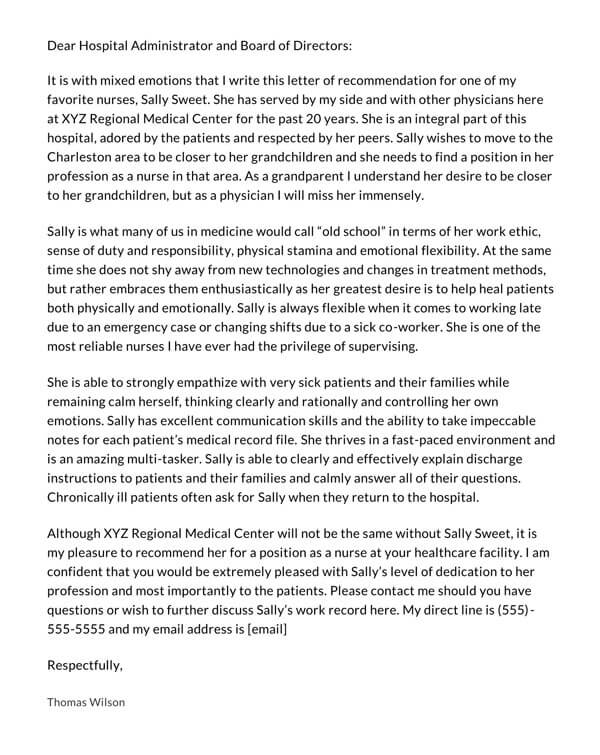 A good nursing recommendation letter should be able to convince the recipients or admission board of the applicant’s competency.

The essential tips to write an effective nursing letter of recommendation include:

Since it’s the first part the reader/recipient will read, it stands the chance of giving an overall impression about the applicant. That’s said, the recommender should always ensure this part is captivating and contains substantial and relevant descriptions as much as possible. Other than the general statement of recommendation, the introduction should also include an example of favorable interactions that is beneficial in the nursing practice.

Talks about skills and qualifications

The nursing recommendation letter would not be effective if you don’t touch on the relevant skills and qualifications that the applicant possesses. As the writer, you need to focus on the personal attributes, skills, experiences, and qualities you believe the applicant has to make them a successful nurse.

While describing the skills and qualifications, it’s important to remain relevant as possible. By this, you should avoid using descriptions that don’t match nursing. Therefore, if you think anything specific to nursing, feel free to mention that. Other than technical skills, there are other nontechnical skills that make a good nurse. As such, you can think about qualities such as problem-solving skills, critical thinking, and empathy, to mention a few.

Note that there could be several applicants eyed for the nursing position. Therefore, being as specific in your descriptions helps make your recommendation letter stand tall from the rest.

End with a strong conclusion

The conclusion paragraph should be brief, concise, and contain a call to action statement why you believe the applicant is the best choice. At the same time, the conclusion should summarize the main points about the applicant’s qualifications and skills. Lastly, it should conclude with a closer clause such as ‘Sincerely,’ ‘Regards,’ or ‘Best Regards.’ This should then be followed by your signature.

How long should a nursing recommendation letter be?

How to Get a Graduate School Letter of Recommendation