What is the Business Purchase Letter of Intent?

The business Purchase Letter of Intent is a written document that allows a seller and a buyer of a given item to come to an understanding over its purchase.  Usually, the document allows the buyer an inspection period to prove its revenue or any other due diligence as part of the buyer’s general idea during the contingency period. A letter of Intent clarifies the intentions of the involved parties as well as the main provisions of the agreement.

There are some provisions of the letter may be binding, but the overall letter is not meant to be binding to both the parties involved. Either party may choose to walk away during the bargaining process if any new information is discovered or a lack of agreement on a particular opinion. Therefore, the letter should be clear in stating which provisions of the agreement are binding so that if either of the party fails to fulfil their obligations of the agreement, they are held responsible for damages to the other party.

Importance of this Letter

Depending on the situation, the role of a Business Purchase Letter of Intent may differ. However, the major aim of drafting a letter of Intent for business is to protect both the buyer’s and the seller’s interests even though it is not legally binding. For example, an LOI may protect a buyer through a clause stating that the transaction is entirely dependent on the buyer’s capability to afford the item.

Breaks Down the Details of the Transaction

To start with, this letter clearly outlines the details of the impending transactions between the buyer and the seller. It shows product or service the seller is offering to the buyer, its cost and the terms and conditions to abide by when purchasing.

This letter of intent gives a specific buyer an advantage over the other buyers. A sense of security should be provided to the person entering the agreement. The specified buyer gets the first priority regardless of what may happen in the future.

Vouches for a buyer’s seriousness

This letter confirms the degree of seriousness of the buyer to the seller. When the buyer appends his signature on such key agreements, this shows his commitment to purchase the commodity and handle  other issues that may arise when implementing the transaction.

As part of generating the letter, the buyer should scrutinize the business he wants  to make transactions with. This is the only proof that agreement the buyer enters shall be well-informed of all the activities.

This letter brings together bonds that already exist between the buyer and the seller. These bonds may create a fundamental principle that will outline how future engagements will be handled. It also  a nice rapport between the two parties.

Another reason for preparing an LOI is to outline the principal terms of an agreement and ensure that all the involved parties agree on these fundamental terms before committing resources to in-depth bargaining and planning. Additionally, an LOI safeguards both parties if the intended agreement does not materialize.

In certain situations, an LOI is deemed necessary before executing other processes, for instance, securing a loan from financial institutions such as banks.

How to Write a Business Purchase Letter of Intent

The structure of a business letter of Intent is highly dependent on the specified type of business deal involved, but it usually includes several common provisions that outline the proposed agreement in at least basic general terms. When drafting the letter, avoid including specific dates that relate to performance, as this may render the document legally binding. Follow these steps to help you draft a good LOI.

In this section, state the purpose of the letter and mention the names of both the parties involved as well as their respective roles in the proposed business agreement. Remember to also include a brief description of the specific transaction, that is, what it is that you specifically intend to buy or sell.

Describe the transaction and timeframes

This section of the business purchase letter of intent provides a detailed description of the business deal, including the transaction type you will be entering and a consequent buying price. However, this purchase price is not final as it may be subject to change later at the end of the bargaining process. You may also enter initial timeframes about the immediate future negotiation process, but these should only serve as guidelines and may as well be subject to change at any point of the agreement.

In this section, both the parties involved in the agreement should list contingencies that must be there for the negotiations to go on. One common contingency that may be listed is that the agreement’s closure entirely depends on the buyer’s ability to secure financing or that the final deal for the transaction will only occur if the buyer is contented with the due diligence processes.

Go through due diligence

Due diligence is where both the seller and buyer disclose relevant information about future proceedings so that there are no surprises during the ongoing bargaining processes. This involves checking records, verifying legal documents and tax, or including notice that a certain party will be requesting some documents.

Include covenants and other binding agreements

Generally, an LOI should not be legally binding, but either of the parties involved may choose to include sub-agreements, known as restrictive covenants that are legally binding. Such restrictive agreements include; a non-disclosure agreement that protects both the seller and buyer by prohibiting them from using information disclosed during negotiations for any other reasons but the deal.

The seller may also request a non-compete agreement, which implies that the buyer may not use the seller’s information to start a competing business. You can also include a provision in the letter that states that each party will cater to its costs during the negotiations, including legal fees, accounting, and transport costs.

State that the agreement is non-binding

You should include a section of the letter that clearly states it is non-binding for both parties, save for the sub-sections or restrictive covenants you have included.

Include a closing date

This section adds a specific date by which the parties should have concluded the negotiations and reached a deal. If the parties would not have reached an agreement by the specified date, then the planned transaction and the LOI automatically terminates.

LETTER OF INTENT FOR BUSINESS: TEMPLATE

A letter of Intent is always written by the buyer. Below is a template that outlines general points that may help you draft a letter.

Re: Purchase of a Business Entity

This Letter of Intent represents the key terms agreed upon by the two parties: the buyer and the seller. After coming up with this letter, you need to make a formal agreement that will benefit both the parties involved.

Purchase price: The Buyer will come into agreement with the seller for a certain amount of Dollars (—————)  for ………………. % ownership interest in the business.

Real estate: Does this letter include real estate?

Description. Indicate the location of the real estate

Payment: The purchase price will be paid in the following criteria:

Owner Financing according to the following payment manner:

Financing: The buyer has declared that the letter of Intent is conditional

not conditional       on their capability to get financing.

If the letter is rendered conditional on financing, therefore the following terms should be clearly outlined:

The Intent of the letter is to give a written expression of the mutual interest by the following parties:

Buyers would purchase the business, property, services, or matters set for the in this letter from the letters. This letter outlines some of the terms and conditions as well as information and document exchange to be included in the future agreement.

The transaction in which both the parties have expressed a mutual interest involves the sale of 60 percent shares of Blue hills printers to Royal Computer Services.

Before both parties reach a final agreement, Royal Computer services should be satisfied with the due diligence processes, employment of contracts all the documents and information provided by the Blue Hills Printers.

Blue Hills printers should ask permission to examine the contracts,  financial and business records, and other legal documents of Royal Computer services until this letter of Intent is either closed or terminated. Blue Hills printers have agreed to comply with a  confidentiality agreement and will not directly contact the clients or suppliers of Royal Computer services unless they are authorized to.

Public Announcements and agreement for confidentially

All the parties should agree that they are not going to disclose any information concerning this letter to the public.  Any future negotiations should not be shared without the consent of the two relevant parties.

All the parties should agree to carry their own expenses, that is professional or legal fees that may result from due diligence proceedings or any other matter connected to the set transaction.

This business letter of Intent is nonbinding for both parties except for the paragraph that is entitled “Public announcements and Confidentiality Agreement.”

The closing of this transaction should not be later than 10th December 2020. In a case where the parties do not conclude the transaction, the Public Announcements and Confidentiality Agreement is still active just like any other confidentiality agreement.

And Accepted and Agreed by Seller[s]

All you need for guidance is our free Letter of Intent Templates. We have designed various templates to help you acquire all the required basic information for the Purchase of Business Letter of Intent. To get started, choose the template that feels it impresses you then download from our professionally designed templates. To download the document, click on the download button then customize your downloaded application. After that, you set to good, all the best! 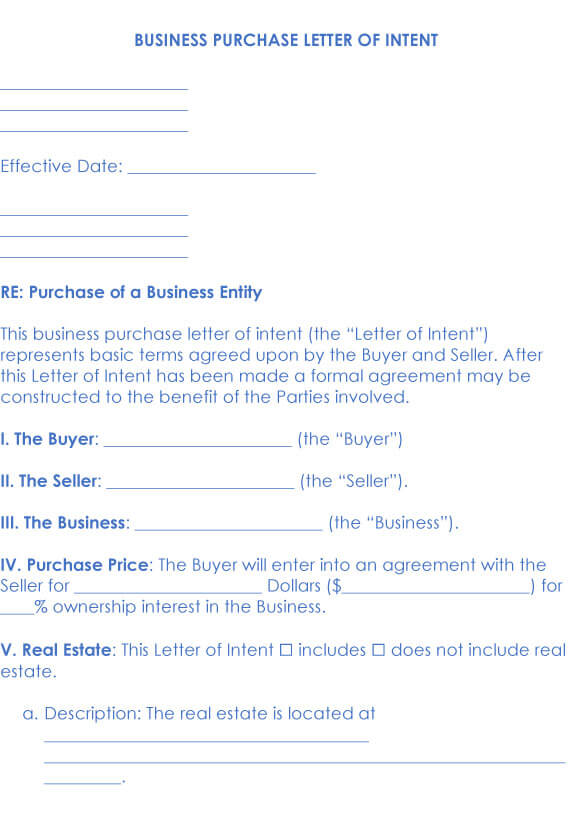 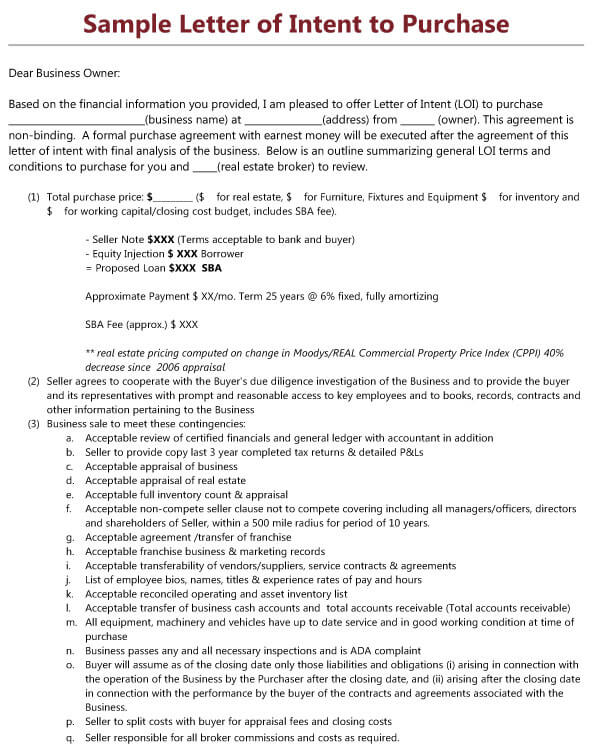 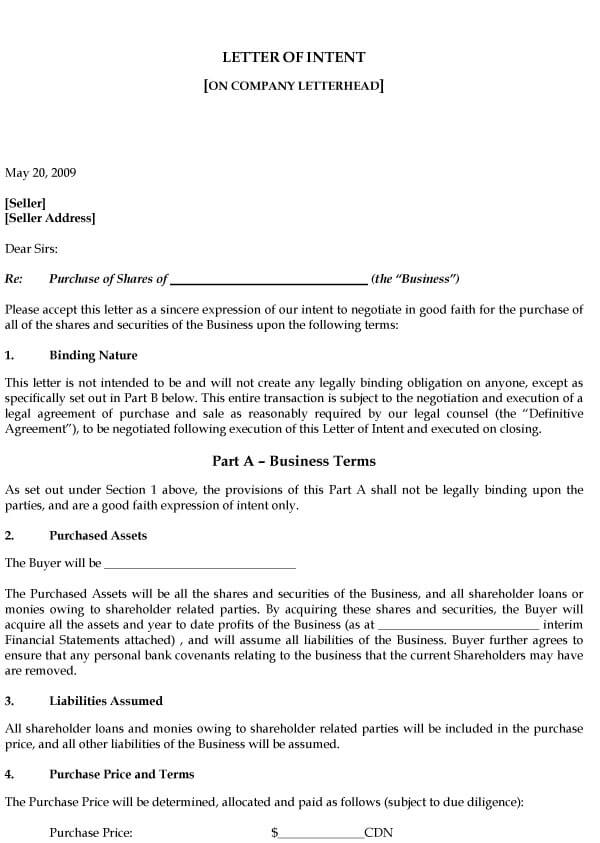 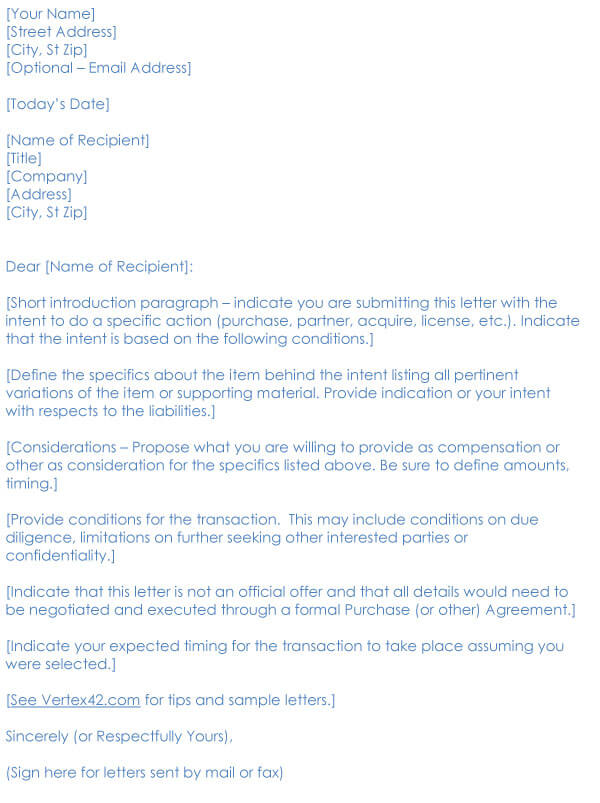 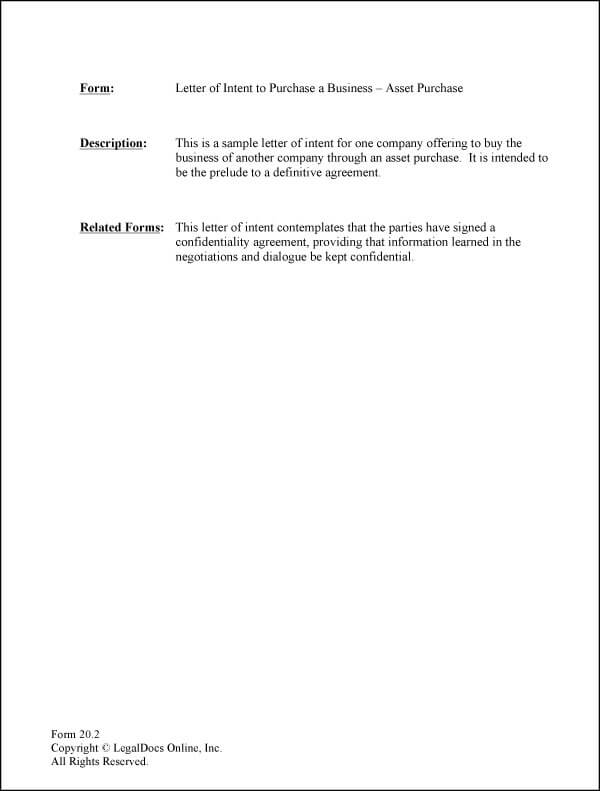 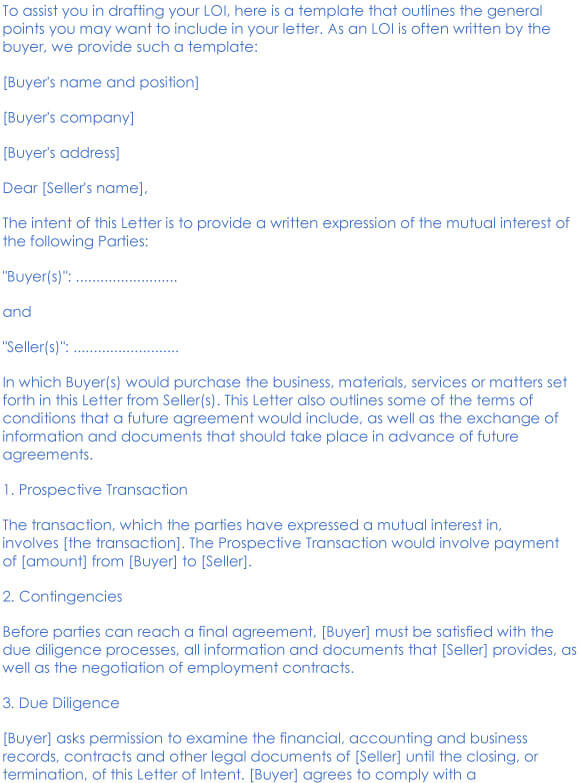 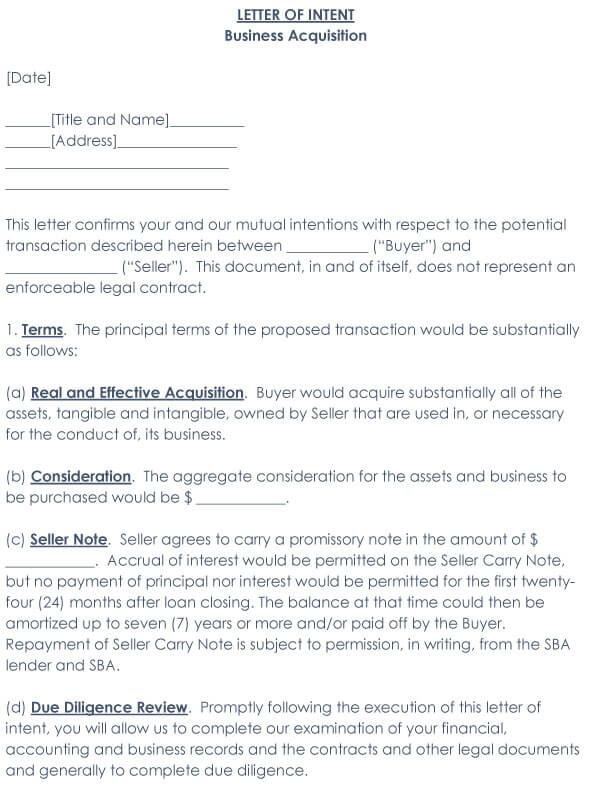 Business purchases may be too risky and large to be handled with less seriousness. Errors, any lapses and inconsistencies that come along may result in tough repercussions. Such purchases should never be approached anyhow. You should cautiously go through the said paths to be able to save yourself from any losses. We have emphasized the benefits of this Letter of Intent to any business transaction. You should always appreciate it since it enhances the safety of business transactions.

A letter of Intent is a non-binding agreement between a buyer and a seller in an intended business deal, be it a merger, joint venture, or acquisition. Sometimes, the letter may lead to a binding agreement known as a definitive agreement. The main purpose of a business purchase letter of Intent is to protect both the buyer and the seller’s interests. Although not legally binding, some provisions of an LOI may be binding on their own to the involved parties. Therefore, while drafting the letter, it is important to clarify which provisions are binding and which ones are not to avoid confusion and possible misunderstandings.

u003cstrongu003eHow do I write a letter of Intent for purchase?u003c/strongu003e

Generally, a business purchase letter of Intent is not legally binding since it is an overview of the transaction process. Therefore, it is an agreement to agree; either party can cancel it at any time based on new information or a disagreement. Nevertheless, some parts of the letter called restrictive covenants may be binding on their own.

No. This letter is not legally binding buy you can introduce restrictive covenants. You can create some clauses that may at least outline some aspects of legal binding.

This letter can be drafted by anyone, so there is no need for an attorneyu003cstrongu003e.u00a0 u003c/strongu003eIf you feel that the modern transactions are too complicated for you, then you should consider involving an attorney

u003cstrongu003eWhen should you create a business Purchase Letter of Intent?u003c/strongu003e

You should create the letter just before you execute a transaction. This is the time when the buyers and sellers have agreed on a deal; therefore, they need more information before they go farther.