A Non-disclosure agreement (NDA) is a legal contract or part of a contract between two parties that outlines confidential knowledge, information, or confidential materials that the parties wish only to share between them.

Mentioned below are some of the common situations where one may want to use a Non-disclosure Agreement:

Both NDA and Non-compete are similar in that they are legal instruments that are considered as restrictive contracts that limit what an individual can say or do under certain situations. A non-compete agreement restricts an employee from quitting an organization and establishing their own rival entity in direct competition and a close proximity with their previous business organization. On the other hand, an NDA restricts an individual from disclosing any sensitive information to external parties.

Non-Compete Agreements have the following characteristics:

The following are the common types of Non-disclosure Agreements.

This is a non-disclosure required for any person or an organization (Business associate) in order to access protected health information.

It allows an organization to show its internal ideas to a 3rd party.

It allows a property seller to disclose information to a prospective buyer.

Cease and Desist Letter for NDA

It warns an individual that legal action will be taken if he/she intends to disclose information further.

It allows a landlord/ property owner to release information regarding a commercial property to a prospective tenant or buyer.

Prohibits an employee from revealing proprietary information or trade secrets of the organization he/she works for.

It discreetly releases information with monetary value while protecting the recipient from legal liability if any details leak.

Medical employees sign this to ensure that patients’ information will not be leaked to the public.

It protects critical information when a third party is contracted to perform a service.

It protects the firm offering an internship from information being disclosed to the public by an intern.

It protects the important information that a landlord may disclose to a potential tenant regarding the property of interest.

This protects the film idea from being disclosed to the public.

This is used when sharing proprietary information about an invention or a new idea with another party.

This is used when sharing details about a new product or service that is yet to be patented or released to the market.

It allows a property seller to share information with a prospective buyer. Such information shouldn’t be made public.

Used when sharing information with another party to come up with patentable software.

It highlights proprietary information meant to be shared with a third party but has to be kept secret from the general public.

Used when one party shares information that should not be disclosed to anyone by the recipient.

This is used when individuals offer to provide their time and labour for free and commit to treating any information shared with them with confidentiality.

It’s an agreement made in order to create a website while protecting the information regarding the activity and the persons involved.

What to include in a Non-Disclosure Agreement

The following has to be included when writing an NDA:

When writing an NDA, state the parties involved (both the recipient and the releasor of the NDA) and indicate the date when the NDA became active.

Indicate whether the NDA is unilateral or mutual. This will be determined by the number of parties sharing the information.

It is the proprietary information that should be kept confidential by the necessary parties. Such information includes:

It refers to a statement pertinent to the unauthorized or illegal use of the NDA issuer’s property or his/her details for personal gains that may end up causing harm to the violator. The illegally used information may include a company’s trade secrets or business plans.

This refers to highly sensitive information only known by a person or an entity that is important for them to keep their business running. A statement pertaining to this is also essential to be included in the agreement.

This refers to the role assigned in the NDA to each party to ensure that none breaches the agreement.

The relationship section of the NDA should show the reason why the involved parties are sharing confidential information.

Governing law in the NDA stipulates the State whose laws will be applicable in case of a contract violation.

The parties involved are required to sign the NDA document to approve that they accept to enter into an agreement. for this purpose, a section for signatures is essential to be included in it. 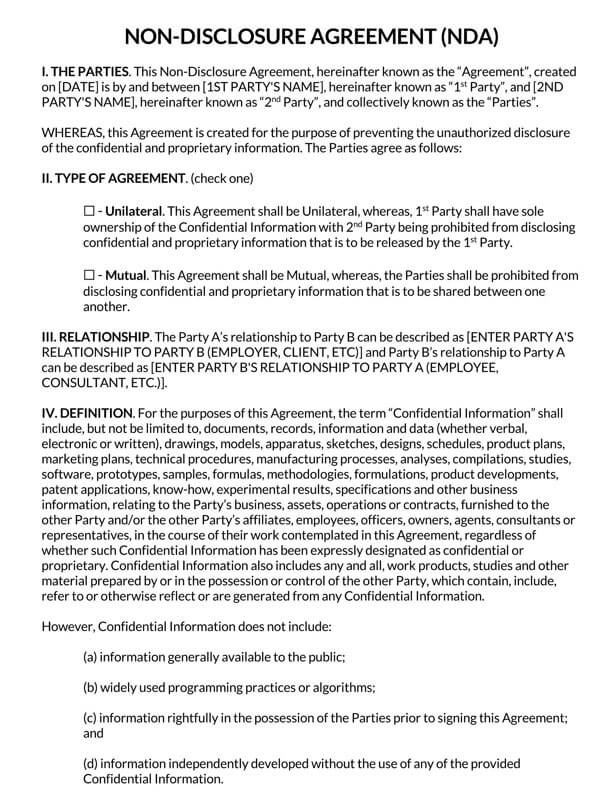 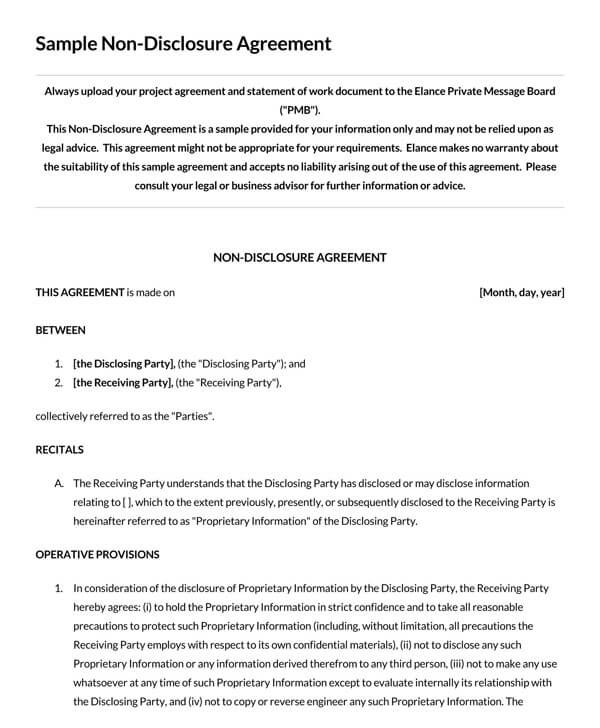 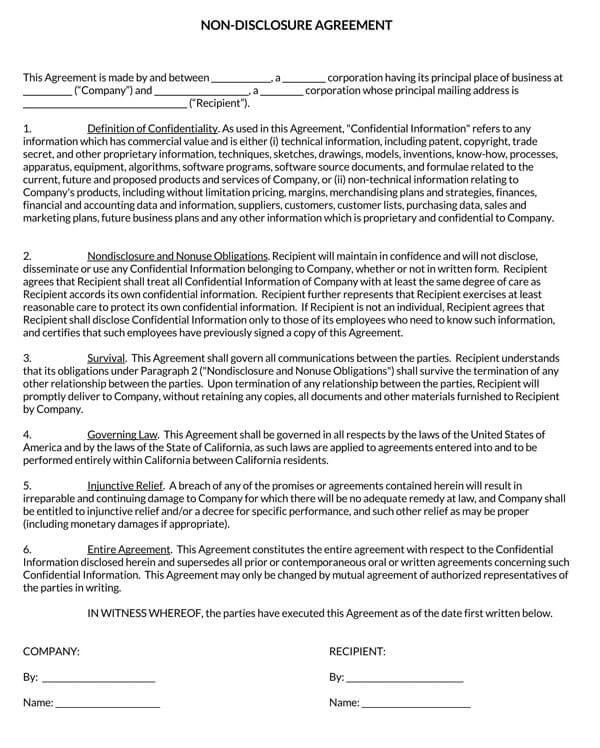 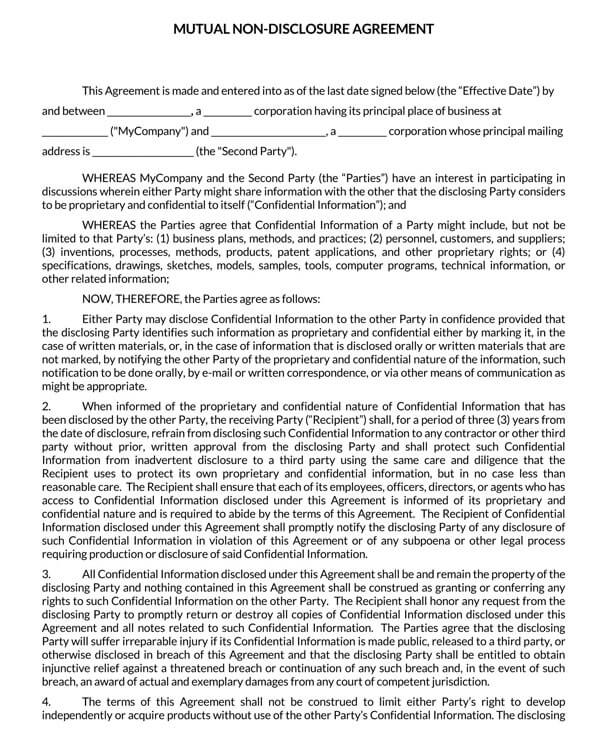 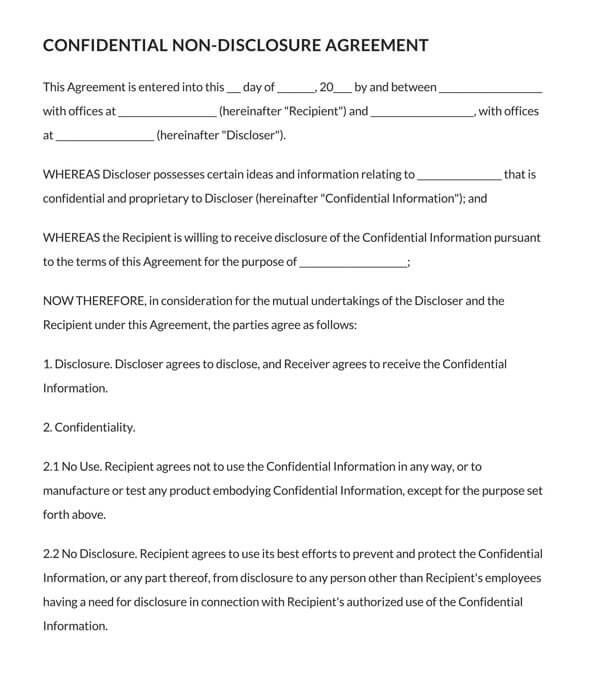 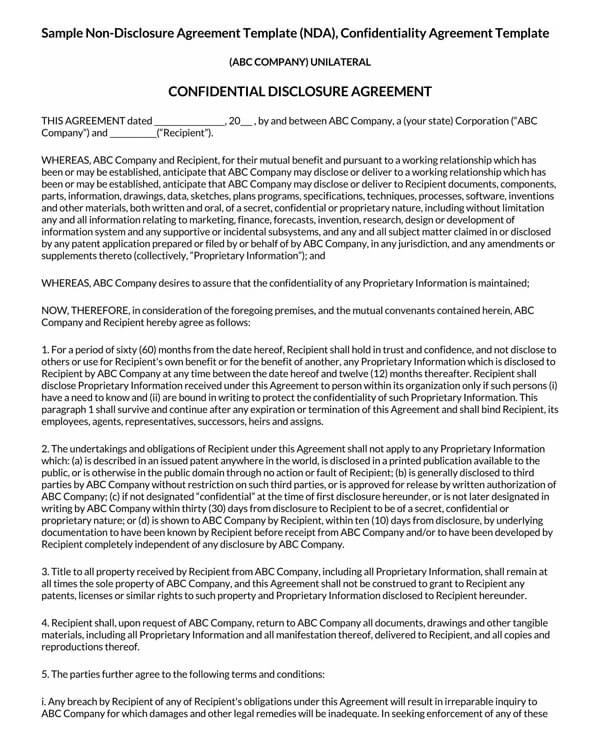 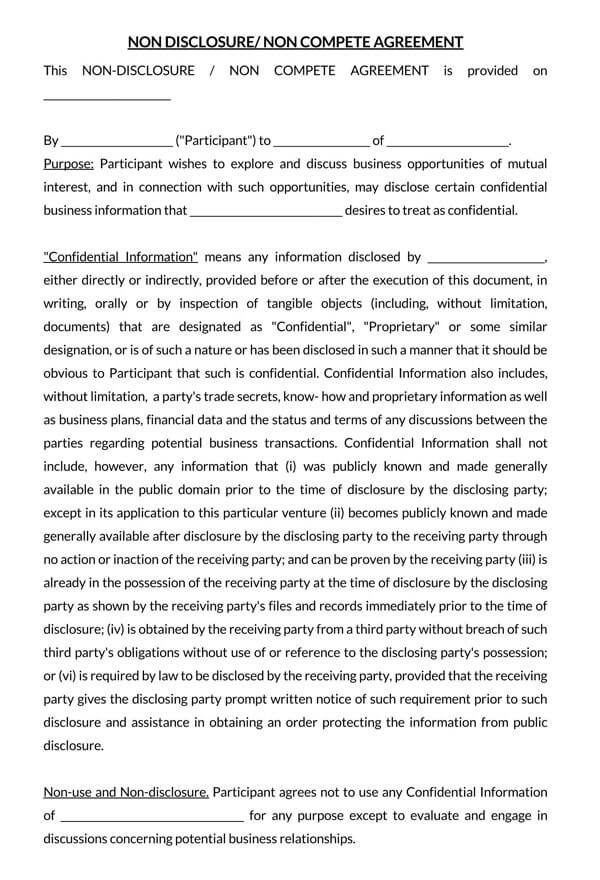 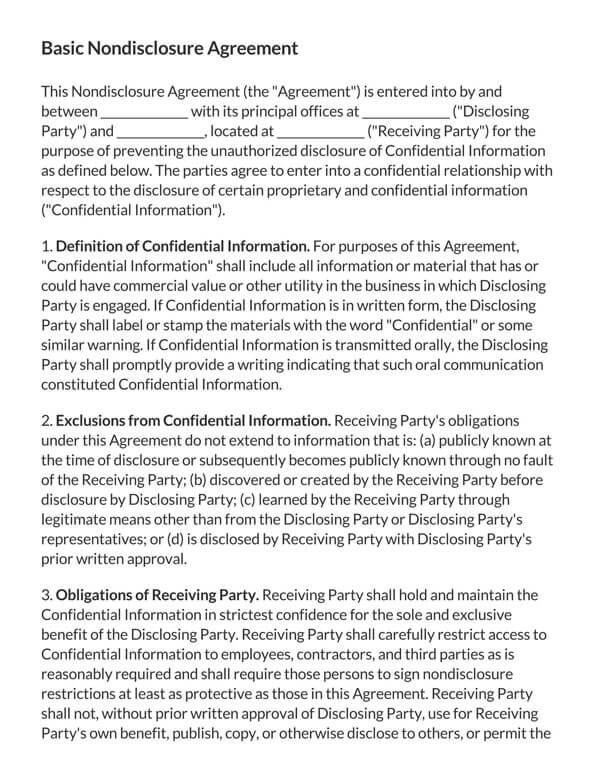 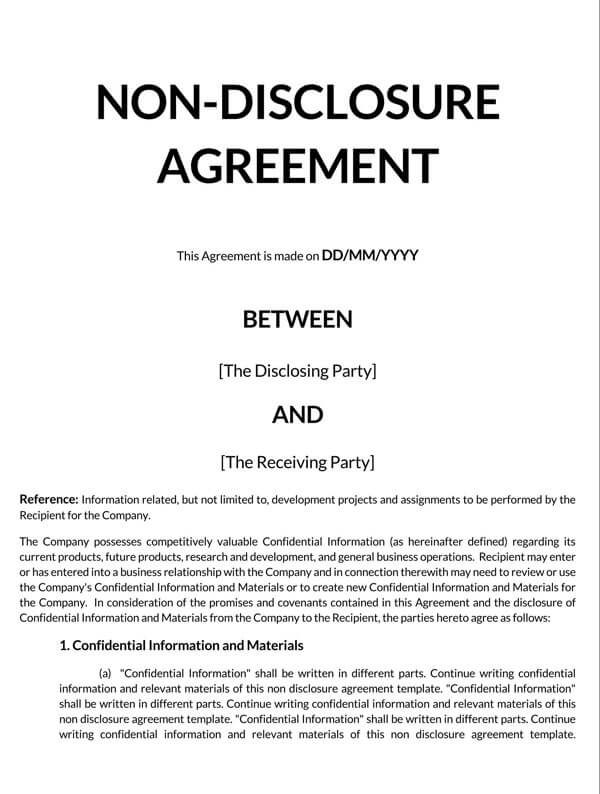 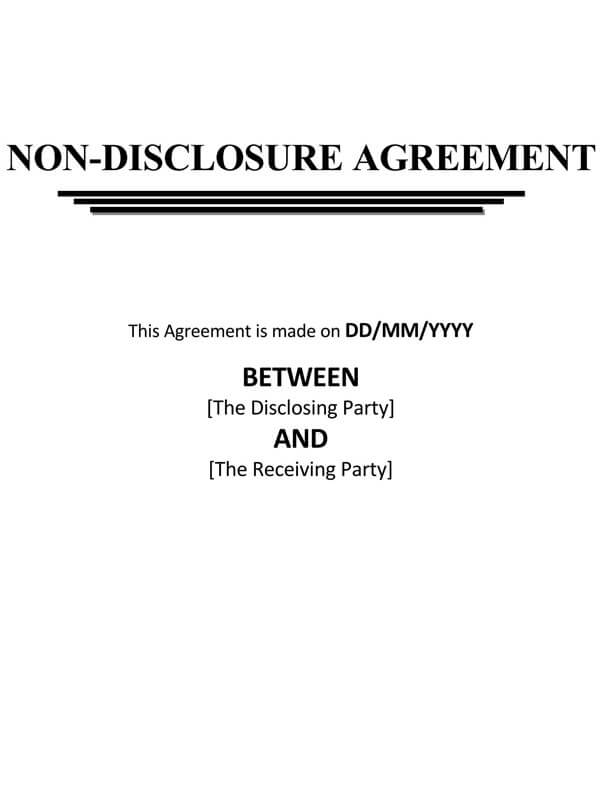 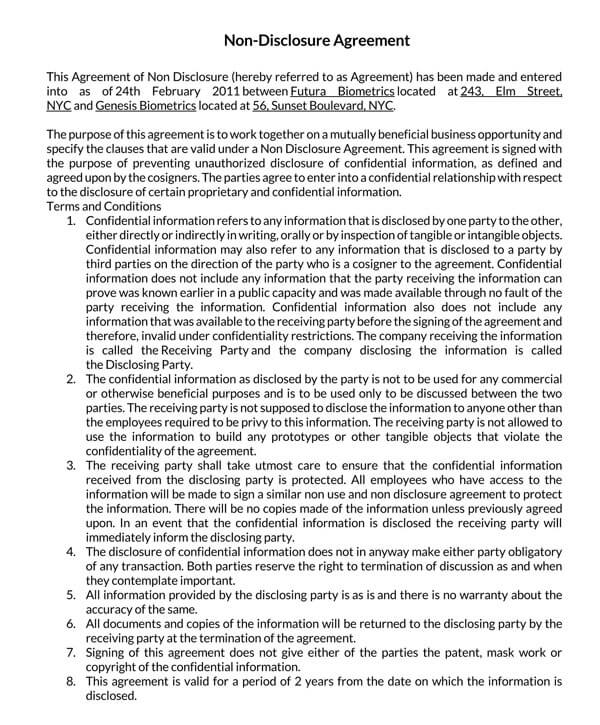 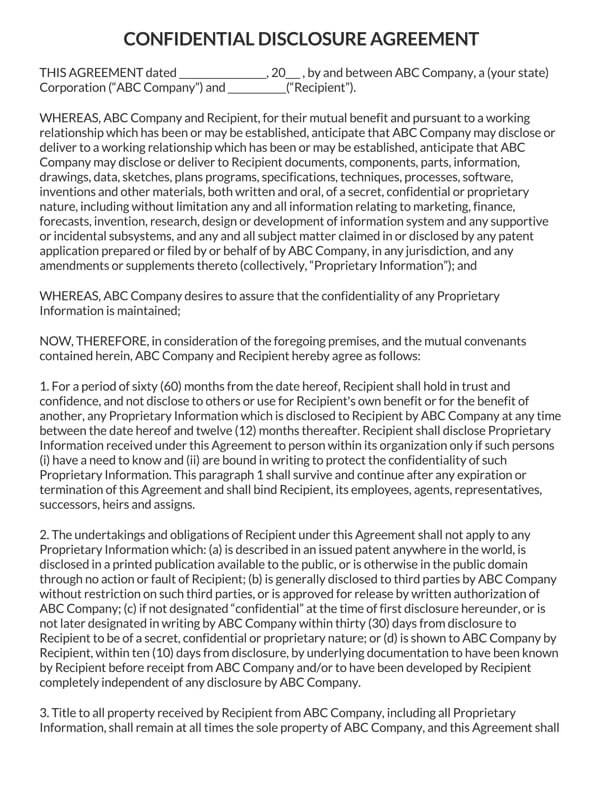 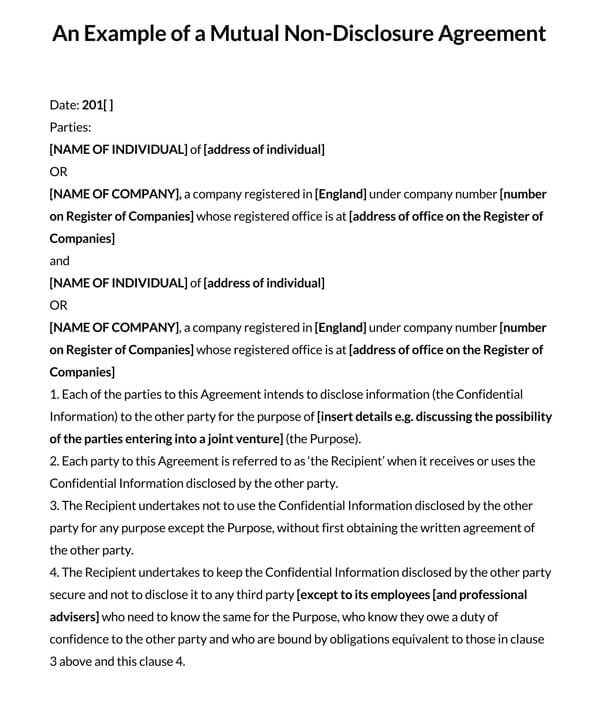 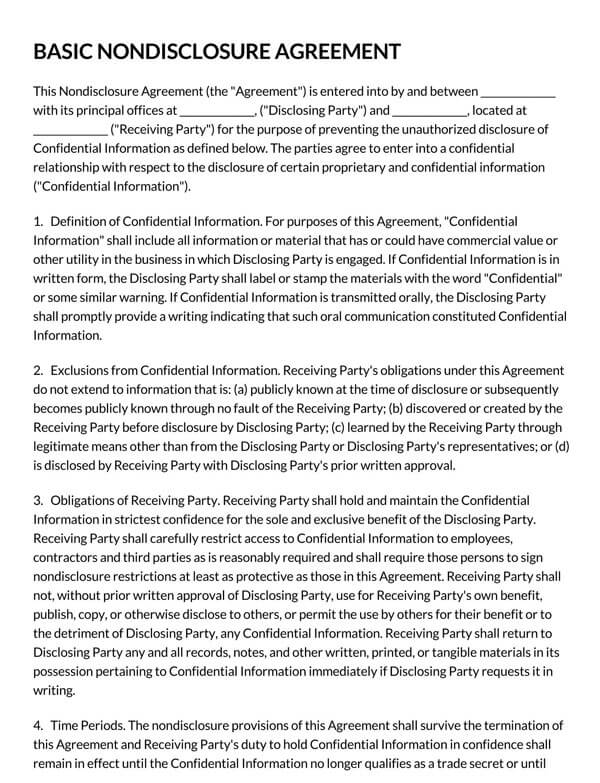 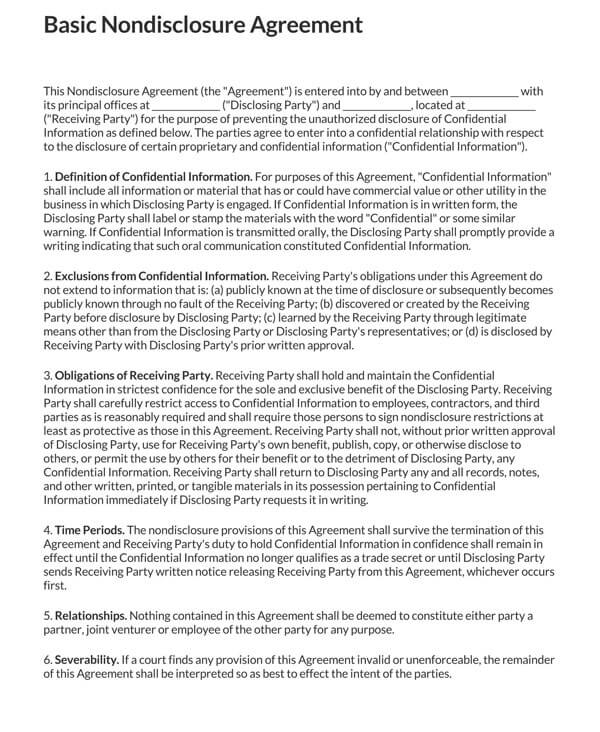 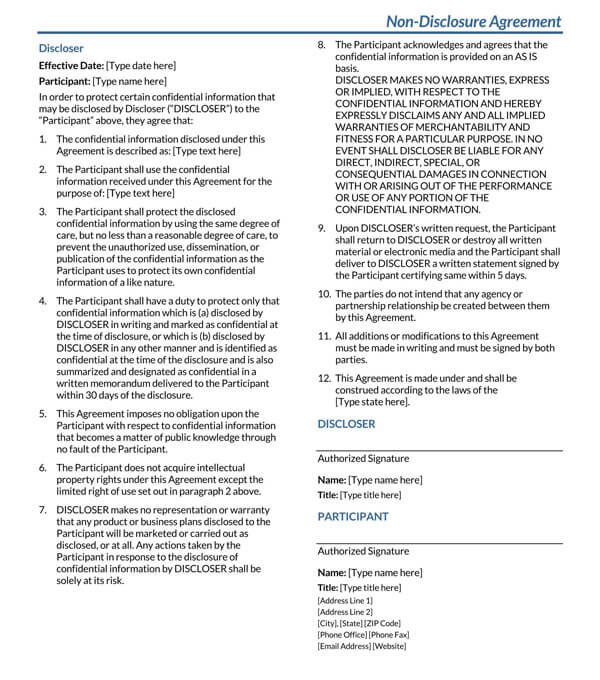 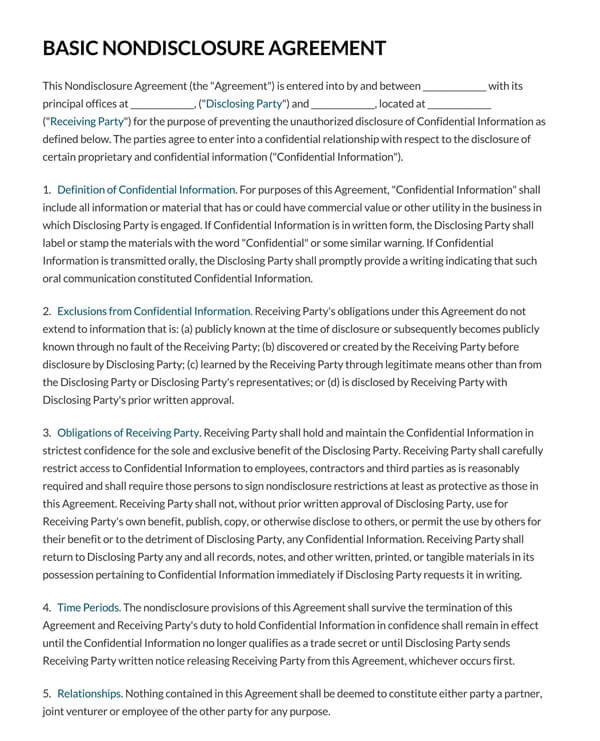 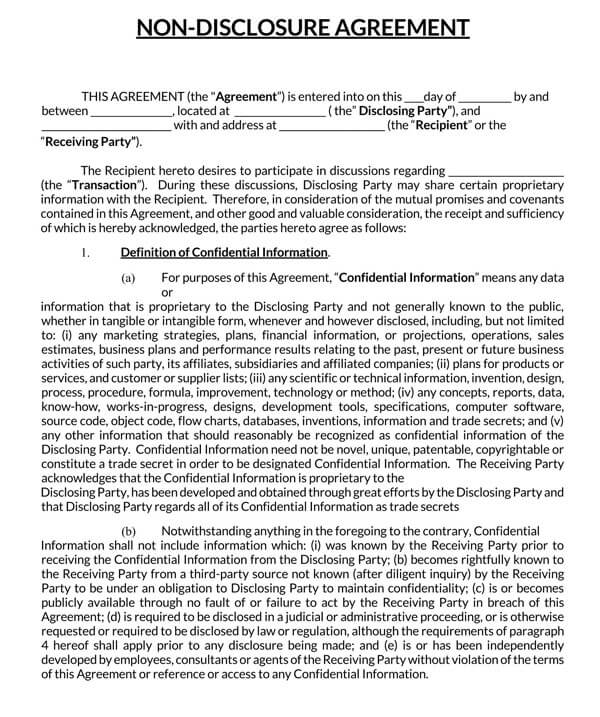 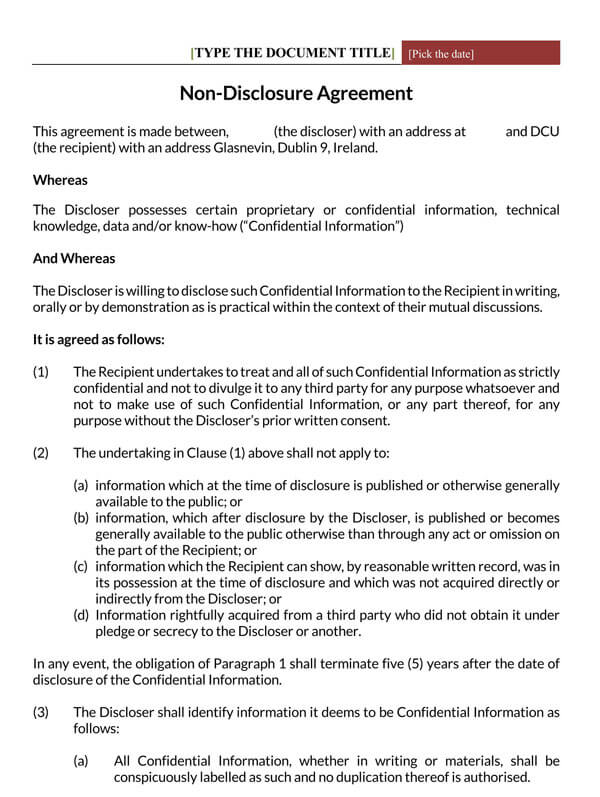 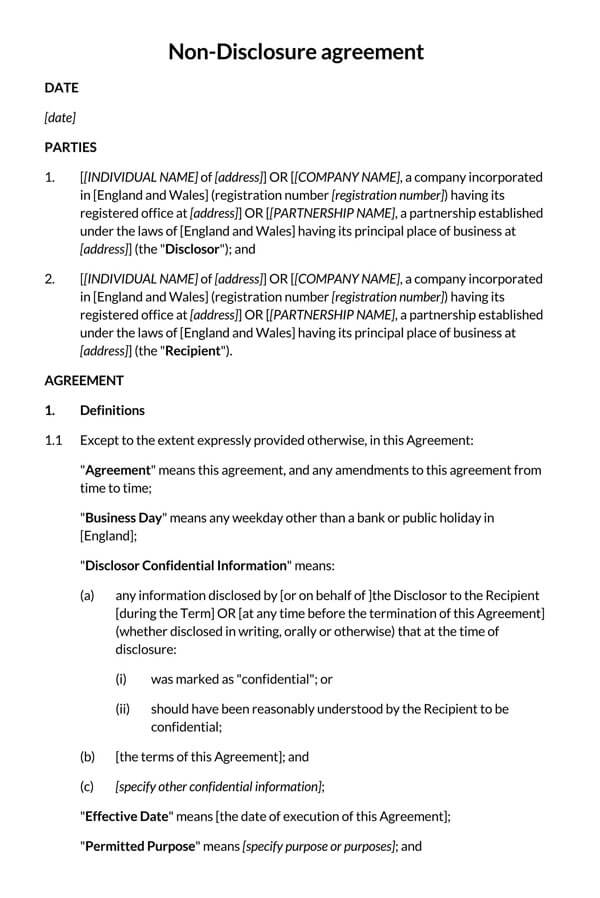 What not to include in an NDA

The following should be exempted from an NDA:

Is an NDA legally binding?

Yes, properly executed NDAs are legally binding since they are not restricted in any state.

How long should an NDA last?

An NDA should remain valid and active as long as the confidential information remains useful.

What happens if you break a non-disclosure agreement?

The consequences of breaking an NDA are similar to those of violating other contracts except in cases of legal exceptions such as involvement in illegal activities.

What happens when NDA is violated?

Violating an NDA may result in serious consequences such as facing legal charges and paying financial damages and other related costs.