Meeting minutes essentially work as a transcript for a meeting and serve as an official record for all members who were not present during the occurrence of said meeting. It is considered a legal record of the meeting and serves as proof of proceedings to all members that we’re entitled to being present at the meeting. Typically, the responsibility of charting down the minutes of a meeting falls on a secretary in an organization. In smaller, less formal, and organized meetings, any member may take up the mantle and write down the minutes.

Why do organisations write the minutes for a meeting?

Strictly speaking, the term “minutes” is fairly ambiguous and doesn’t truly represent the purpose of the practice itself. The minutes for a meeting don’t strictly include minute-to-minute proceedings of the meeting. Instead, it serves as a summary, as well as proof of the proceedings of the meetings in question. This is to help members who weren’t present catch up and stay up to date with the progress of the organization, as well as to help preserve records in case they are needed for reference in the future. They are essential for long-term planning, which is why organizations always keep an accurate record of the minutes of all official meetings, as it is an easy way in which they can avoid oversight and inefficiency.

How do I write the minutes for a meeting?

First and foremost, the person in charge of writing the minutes should understand the format in which the organization would like them to be taken down – This is very important, and typically varies from one organization to another. Once that’s done, the note-taker should include all of the following information;

If it still isn’t clear to you, we’ve written up a sample that works as a template as well. It can be used to write minutes for any organization as-is or may be modified to better suit the particulars and requirements of a more niche organization. It can be found below;

MINUTES OF A MEETING SAMPLE

NAME OF THE ORGANIZATION Date, Time.

First, the secretary must make a declaration of when and where the meeting is taking place.

(In this section, any discussions tabled from previous sessions that are being discussed will be written down. If votes are called, the secretary is in charge of noting down the tally.)

(In this section, any new issues that are brought up in the course of the current meeting will be discussed and noted down. Again, issues that are voted on will require the tally to be recorded anonymously.)

In some organizations, time is set aside after current business to discuss ad-hoc topics that may be brought up. This section is for those topics.

This section includes the final thoughts, statements, opinions, and decisions, if any, at the meeting. Typically, most organizations have an open floor at the end of meetings to let members speak openly about what they wish to speak about. 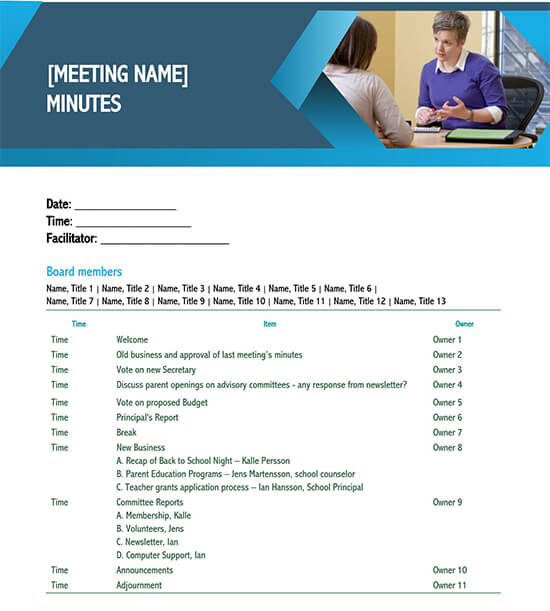 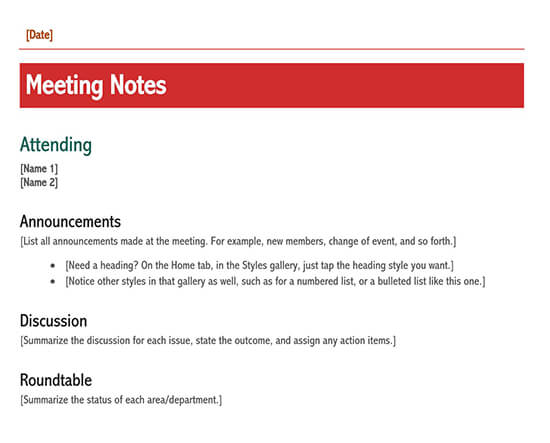 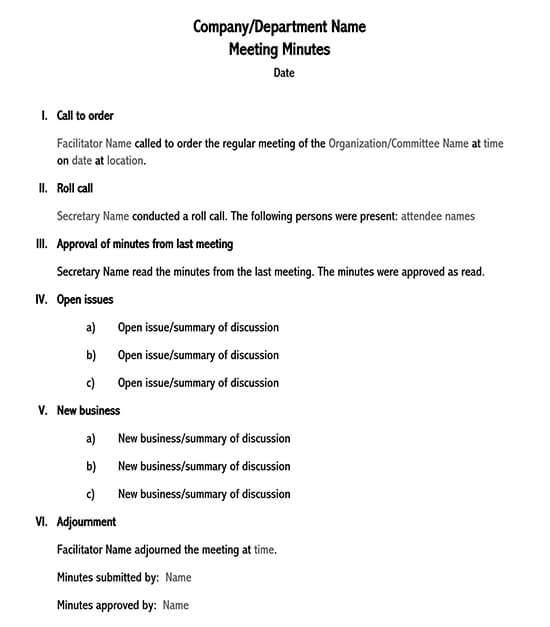 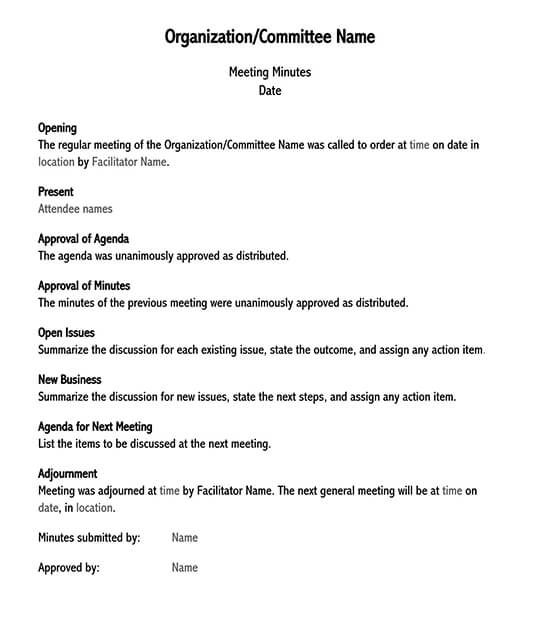 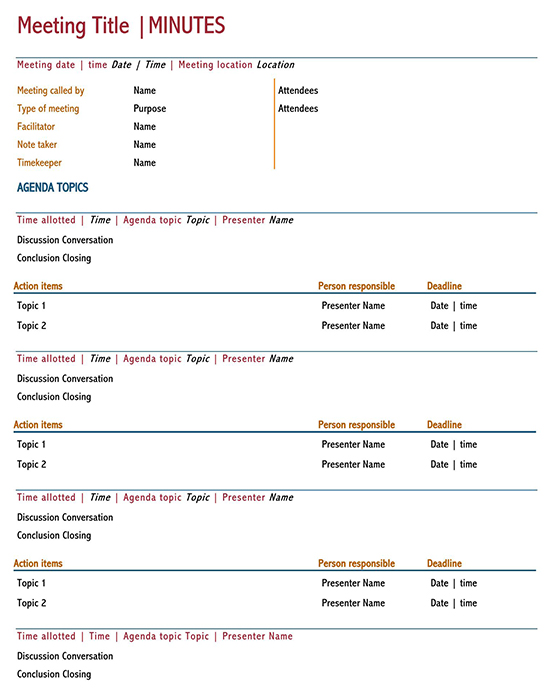 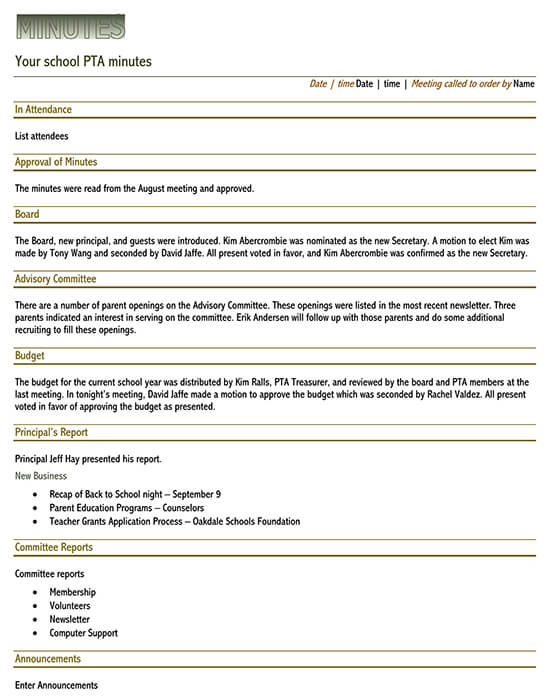 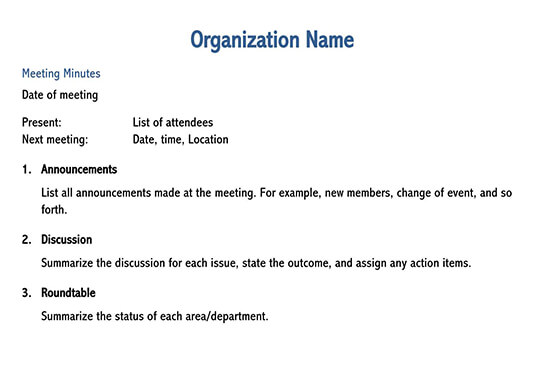 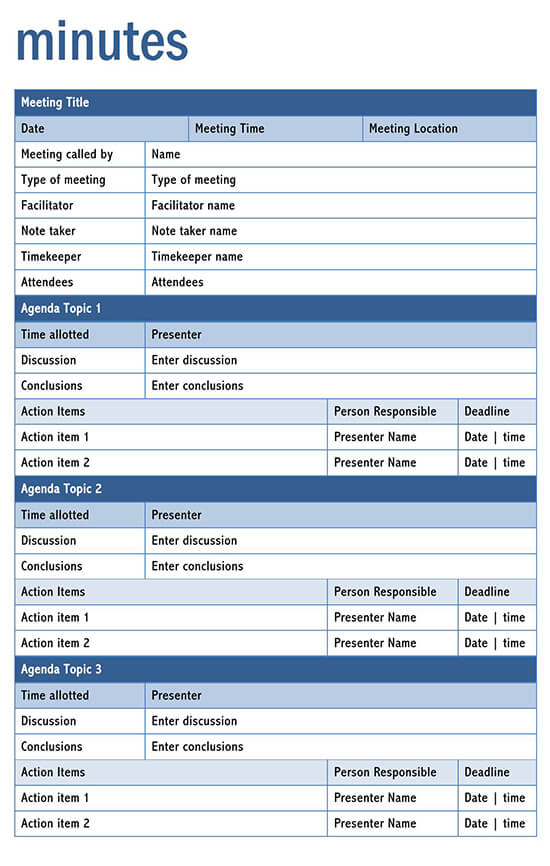 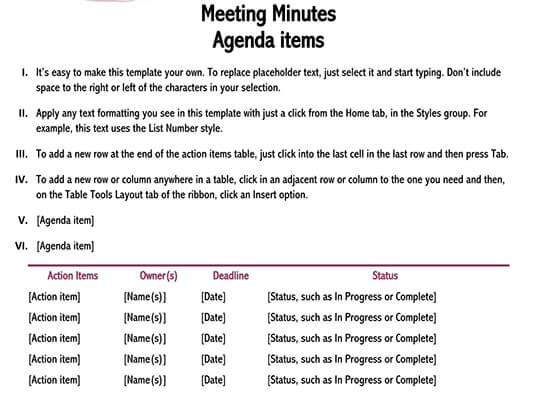 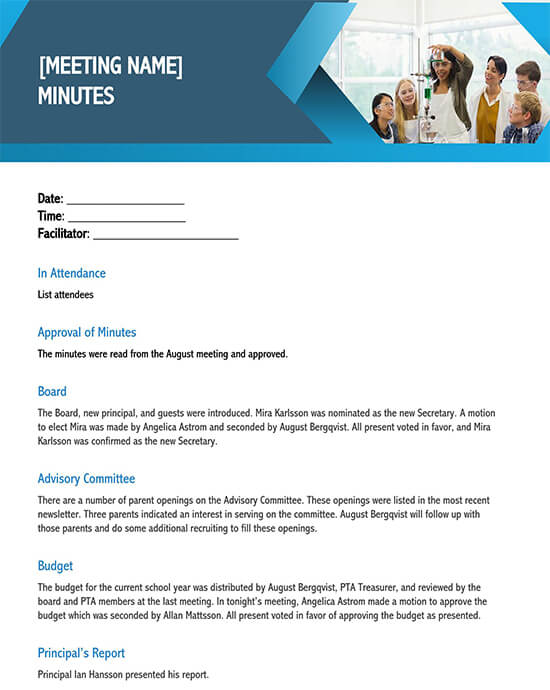 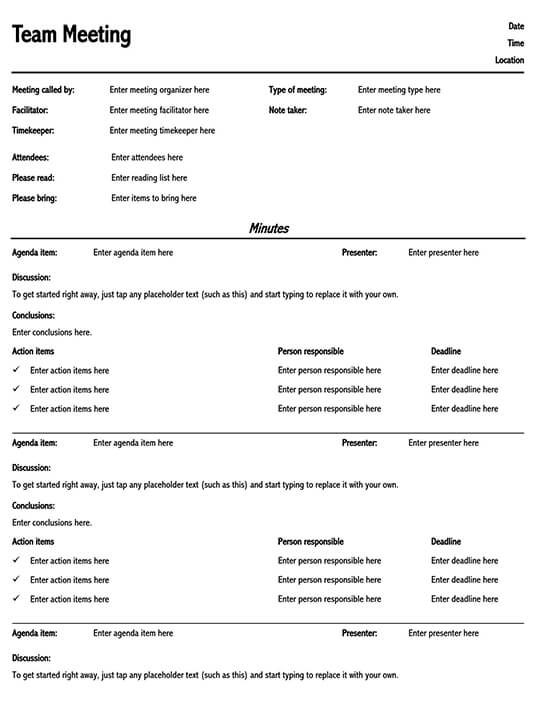 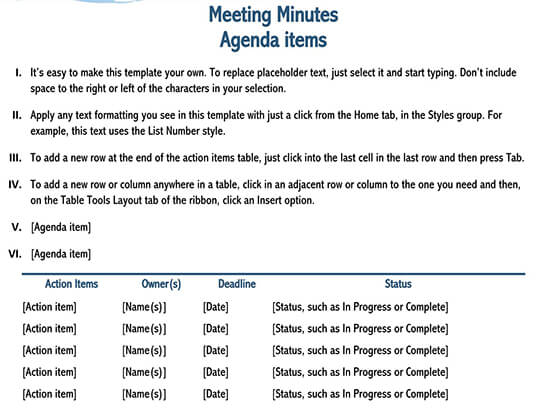 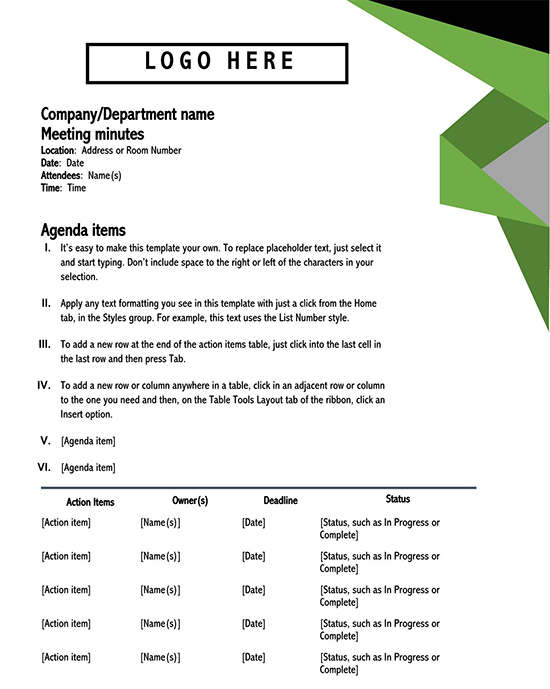 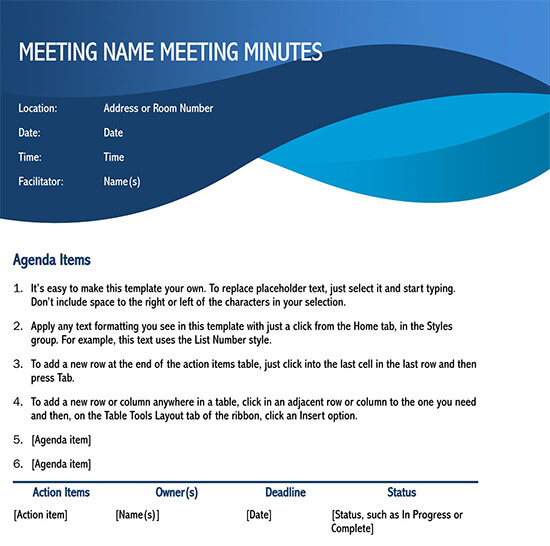 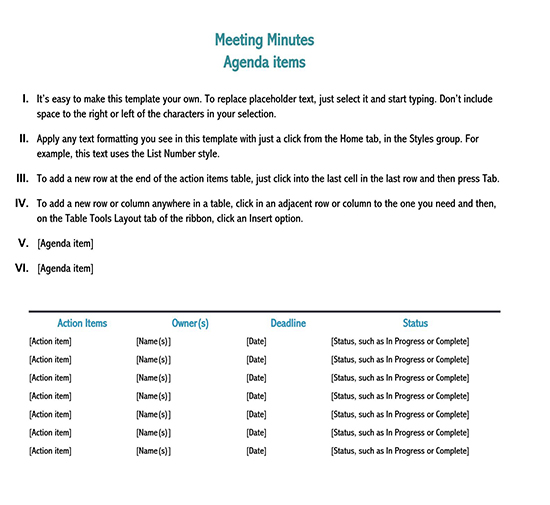 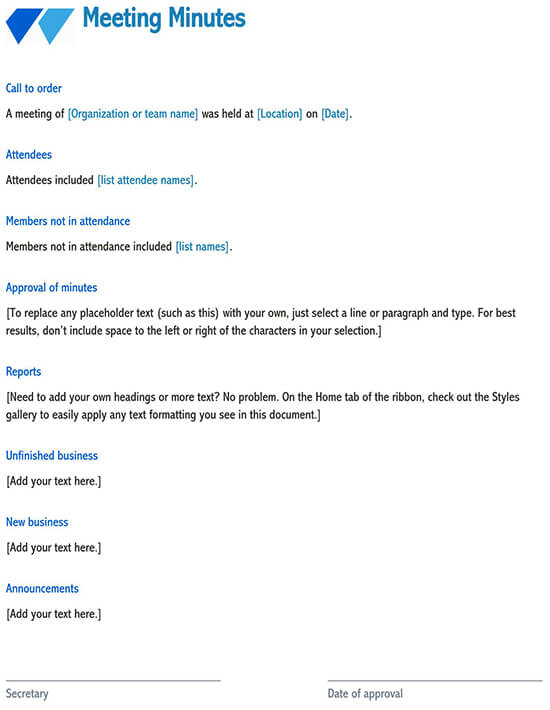 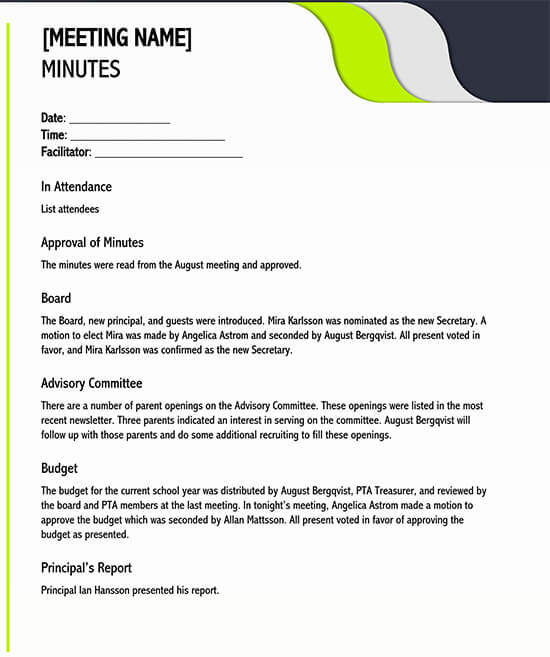 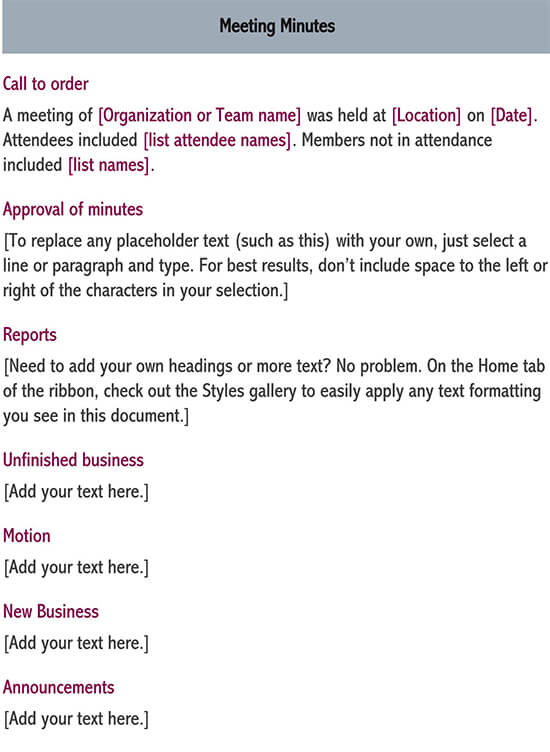 What is meant by meeting minutes?

The minutes (pronounced my-newts) of a meeting are a record of all the topics discussed, as well as the attendance and all other relevant details that vary on an organizational basis. They serve as a reference for absentees and are used as a record in case they are required in the future.

How do I write the minutes of a meeting?

Writing the minutes to a meeting is a very simple process – simply follow our guide above or use our template to write the minutes of a meeting.