Jobs are generally rare to come by. That is informed by the stiff competition that each vacancy attracts. If someone succeeds in finding one, he, by all means, has to be congratulated and showered with blessings. That is a role that is better played by drafting a suitable letter to that end.

This letter is called the ‘congratulations on new job’ letter. Its aim is basically to shower the new employee with praises, blessings, and love. We take a deeper look into it in the following segments of our discussions. Take a look at the descriptions we give hereunder:

Significance of the Congratulations on New Job

For one, it appreciates the feat that the new employee has garnered. As noted above, jobs are extremely rare to come by. If and when someone comes across one, it is only a matter of courtesy to congratulate him. That will also thaw the pains he endured while searching for one.

It is not enough sometimes to simply appreciate the feat. It pays to go beyond that to even shower the person of interest with the necessary praises. Tell him how far he has got and the significance of the milestones he has attained. That again will go a long way in helping him realize the importance of the job.

Getting a job in and of itself is of course, never enough. How you perform in the new job also counts, and is by far the most important. This letter goes to inspire you to work even harder in your new job. This, of course, is a great inspiration as it sets the tone for the rest of your work.

Settling in a new job, though awesome, might not always be a walk in the park. In fact, many people often opt to quit the workplace at this time. The letter also goes on to inspire some hope in the new employee. It basically lets them know that they can do it.

In closing, this letter also energizes the affected persons. It basically does this to charge the person to go ahead and face the challenges to exercise some braveness even as he embarks on the task of starting up in the new job. This ingredient is, by all means, necessary if getting started has to be flawless.

A typical ‘Congratulations on new job’ letter of this kind has to comprise the following points or pieces of information:

Name and Address of the Address – The name and the address of the person who is being congratulated on the new job. Though not a must, this address has to be the same as that of the workplace. The purpose of this is to foster coherence and minimize the loss of the letter.

Date – It was the date when the letter was officially drafted. This date is subsequently used for any future references if need be. Preferably, this date has to be the most current for the avoidance of any doubts.

Salutation – A letter of this kind typically opens with a salutation that is basically a greeting. The greeting charges the recipient, and he sets him in the tone and mood needed to read and make good meaning of the communique altogether.

Job Title and Workplace – In the main body of the letter, you should incorporate the job title and the workplace of the employee. This will go a long way in making the letter appear specialized and current when all factors are taken into consideration.

Name of the Sender – Round it up with your name as the sender of the letter. That is the surest way to make the person appreciate your role and decision to provide support for him. You need not really sign this letter, though.

Here is a sample letter for congratulations on new job:

RE: Congratulations on New Job

I would wish to take this wonderful opportunity to congratulate you on your new job as a bank teller with the First National Bank. This is a well-deserved congratulation considering how long it has taken you to get it from the time you cleared school.

Kindly do not take this opportunity for granted. Give it your all, and do not also forget those who have not succeeded in getting anything.

Following are free editable ‘Congratulations on new job’ letters that can be customized as per need: 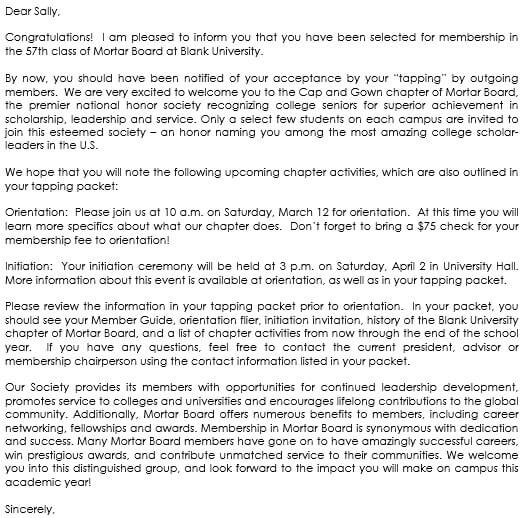 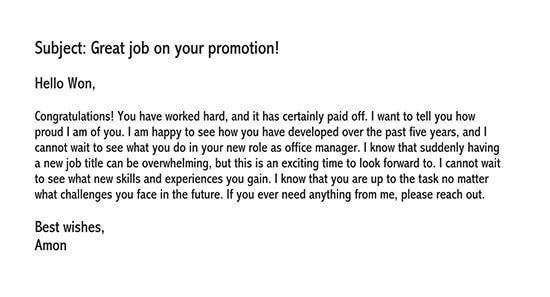 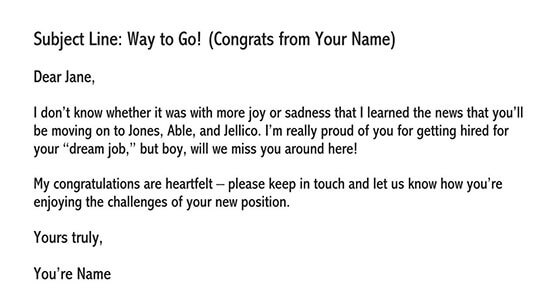 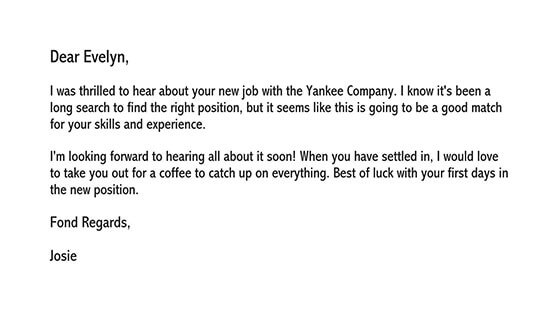 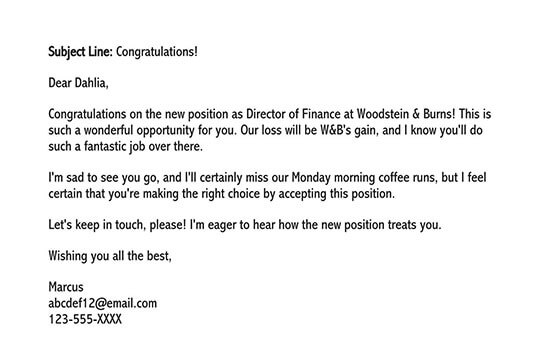 Tips to Write the Letter

The three tips below will help you to draft the ‘Congratulations on new job’ letter in a better and more fulfilling manner:

Use a Casual Tone and Format

A ‘Congratulations on New Job’ Letter is not an official letter. You need not employ an official or formal format hence. Instead, you only have to use a casual format and tone. Nonetheless, the letter has to be comprehensible and should hence be devoid of any grammatical or semantic errors.

Keep it short and to the Point

You just have to convey the message intended, and that is it. There is absolutely no need to incorporate too many details that are off the point. Just tell your friend or whoever you are congratulating that you are pleased with his feat and that you wish him well.

See to it that you incorporate every necessary detail. The details are the ones we have showcased above. It is only in doing so that the letter will be sensible and easily interpreted. You do not want to leave anything to chance at all.

Having belabored this whole issue of congratulations on new job, we now leave you to make good use of it altogether. We ask you to even congratulate those who got their jobs earlier but whom you have never congratulated in one way or another. All the best as you set out!