Characteristics of a promissory note release

• It should be in a written format either typed or handwritten, the use of oral means that is not advised

• The promissory note release should have and entail a clear, straight to the point, details that indicate the loan has been paid off.

• It should have a clear signature from the borrower and lender of the cash; also their names should be well indicated, after sealing the deal

• The document should present the date the amount has been paid and stamp to seal the deal and release the borrower of the debt.

Notarizing of the note: On matters of acquiring a person who has the legal authority to witness the signing of the documents may be to ascertain the validity of the material, maybe crucial since he or she will be able to ensure that the content is not a scam and witness the sealing of the deal.

Here is a sample of a promissory note between Dan Walker (borrower) and Ethan Sawyer ( lender).

On the 12th of February, payment for a loan of $600 was paid to Ethan Sawyer. The borrower, Dan Walker, had initially borrowed an amount of $530 on the 15th of September 2019. This met the agreement of paying with an interest of $80. With this note, Dan walker is, therefore, releases of all obligations of the loan. 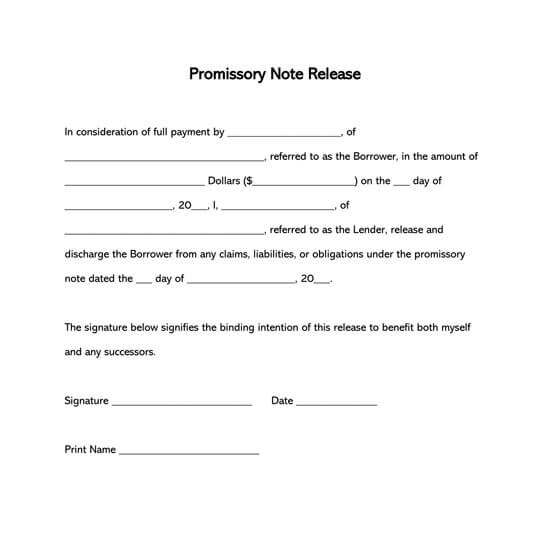