A Promissory note is a financial document in which a borrower promises to pay back a specified amount of money borrowed from the lender by a given due date. The promissory note outlines the terms of the loan, such as the principal, interest, loan maturity date, date of the loan, disbursement of funds, and signatures of the lender and the borrower.

Promissory notes can either be secured or unsecured. They are used to assure the lender that he or she will receive his or her payment on the agreed date and terms. This is in a case where the borrower cannot raise the required full payment at that moment. A promissory note provides the necessary paper trail or documentation in lending and borrowing transactions which are necessary for tax purposes and reference.

Scenarios where a promissory note can be used, are as follows;

For example, a promissory note can be used when a seller wants to sell his property to a buyer who is not able to raise a down payment.

A promissory note can also be used for straightforward loans, the repayment plans and terms of which are not too complex.

A promissory note is alternatively referred to as;

As earlier stated, there two general types of promissory notes. Despite serving a similar purpose (promise of payment), they do so under different terms and conditions, as discussed below.

A secured promissory note is one that is issued to the lender accompanied by an asset of value such as a home, land, or vehicle as security for the loan. The lender retains the asset if the borrower defaults on payment.

With an unsecured promissory note, the borrower does not provide any security for the loan. As a result, the lender bears the risk of lending the money, and if the borrower defaults and insistently refuses to pay, legal action becomes the only course of action.

How a Promissory Note Works

Next, once the lender has determined to loan the borrower under the agreed terms, they should take the initiative to perform a credit check on the follower. It can be detrimental to assume just because you know a person, it is enough reason to loan them money, especially a huge amount of money.

If there are concerns over the borrower’s creditworthiness based on the credit report, asking for security or a co-signer should be the next step for the lender. In cases where the borrower has been found not to be financially capable of paying back the money, another party must be named as their guarantor and will assume responsibility to pay back if the borrower is unable to pay back. The co-signer must be financially capable and willing to fulfil this obligation.

Once everything has been discussed, agreed upon, and one is satisfied with all the aspects of the transaction, then they can proceed to write the promissory note (loan agreement). It contains fewer details and terms than a contract. The document should be signed at the bottom by both parties. Money can then be disbursed to the borrower. It is recommended that promissory notes for loans exceeding $10000 should be notarized.

Once the due date(s) arrive, the lender should receive their money as stipulated by the promissory note (loan agreement). When receiving payments, three possibilities may come into effect; the full amount is paid back, late payments, or the loan is entirely never paid back. If the loan is accordingly settled, a loan release form is prepared and issued to the borrower as proof of fulfilling their contractual obligations. However;

How to Calculate Interests and Installment Plan

Borrowers need to understand what exactly they are paying. The fundamental payments evidenced in a promissory note (loan agreement) are as follows;

Since this interest is representative of an annual amount, what does one do for payment periods shorter than a year? To find the interest owed for a duration lesser than a year, one divides the annual interest owed by the fraction of the year it will take the borrower to settle the loan fully. For example, if full payment will be made with a quarter of a year, the annual interest is divided by 4. If payment will take half the year, divide by 2 and so forth.

For example, if one lends a friend $10000 to be paid after 6 months (half a year) at an interest rate of 10%, calculations will be as follows.

The next item to be determined is the total amount the borrower will have to pay. This is referred to as the final payment amount, which is given by;

Using information obtained from the example given under the heading “interest owed” for consistency, we can get the final payment amount.

Alternatively referred as to as installments. This is the amount of money the borrower will be obligated to pay after every specified period. It is commonly monthly but can be varied as seen fit.

To put into perspective, using the final payment amount determined and the payment duration of 6 months required to settle the loan. Therefore, the monthly payments shall be equal to; $10500 divided by 6 months, giving a monthly payment of $1750.

How to Write a Promissory Note

Coming up with an up to standard promissory note should be every lender’s objective. It might be the only way to receive money loaned. The systematic process outlined below is enough to come up with a professionally structured promissory note.

The first step in writing a promissory note is to write down the date when the promissory note was created. This date marks the day from which the document becomes effective. The date should show the day, month, and year.

Next, introduce the lender and the borrower. First, the promissory note, being a binding document, must clarify the parties bound by it.

Also known as the principal is the amount that was loaned out. The exact amount to be paid back should be declared next. It should be inclusive of the interest, if applicable. The final due date of the loan should also appear in this section. Be specific as possible when stating dates.

The next item to write down is the payment plan. There are several distinct payment plan options available to choose from. The promissory note should state at this point the agreed-on plan.

Next, insert a default clause. The clause should state the consequences of defaulting and how the collection of the money shall be handled. Be sure to state the actions succeeding defaulting. Normally the lender can choose to issue a demand letter, initiate legal action, or take ownership of the asset offered as collateral. It should be clear how these probable actions are to follow each other. Also, expenses incurred when collecting defaulted loans should be billed to the borrower. The promissory note should indicate this.

If a co-signer was chosen as the best option for the lender to be cushioned in case the borrower fails to settle the debt, the co-signer should be identified by name. The obligations that shall befall them if the borrower cannot pay back should be outlined.

Indicate the state whose laws were observed in the creation of the promissory note. This is simply achieved by writing the name of the lender’s state of residence or where they are located if it is an entity.

It is recommended that the promissory note be notarized. The notary public should provide their name, signature, date of signing, and the county or state they represent.

Other details and clauses

A promissory note can include other clauses to cover concerns not addressed in it. Some of these clauses include;

The last step is having the involved parties sign the document. This includes the co-signer and witness (if any). Each party should provide their name, signature, and date of signing. 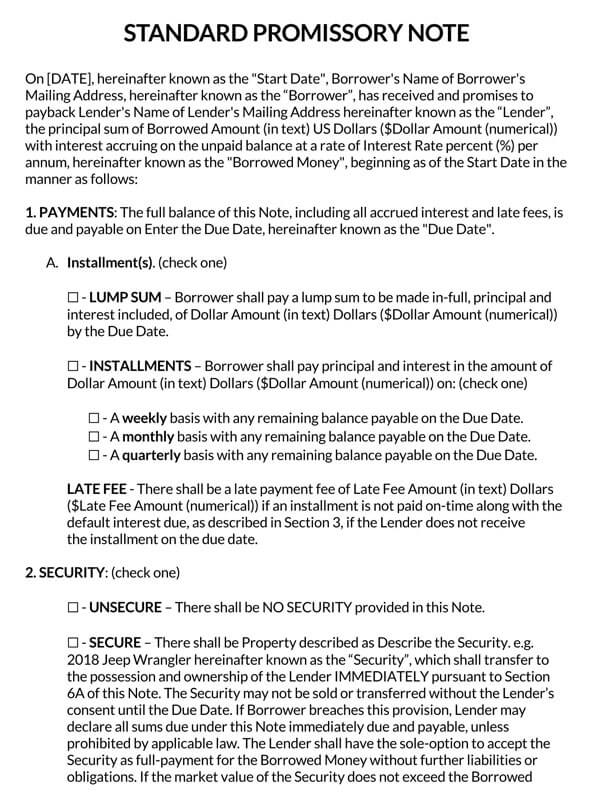 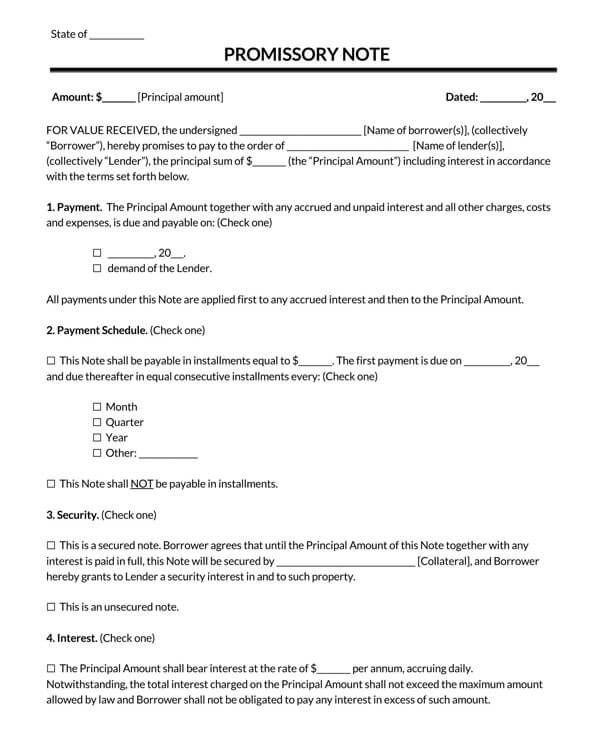 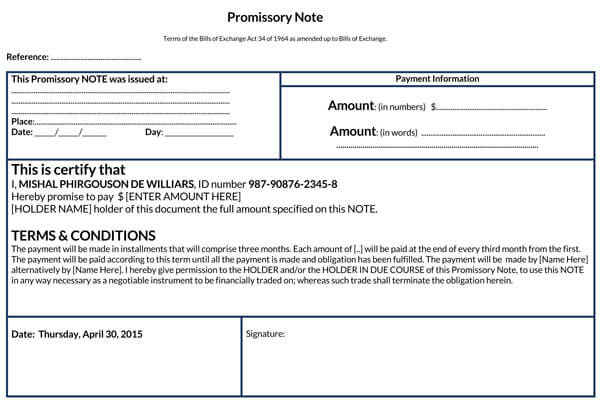 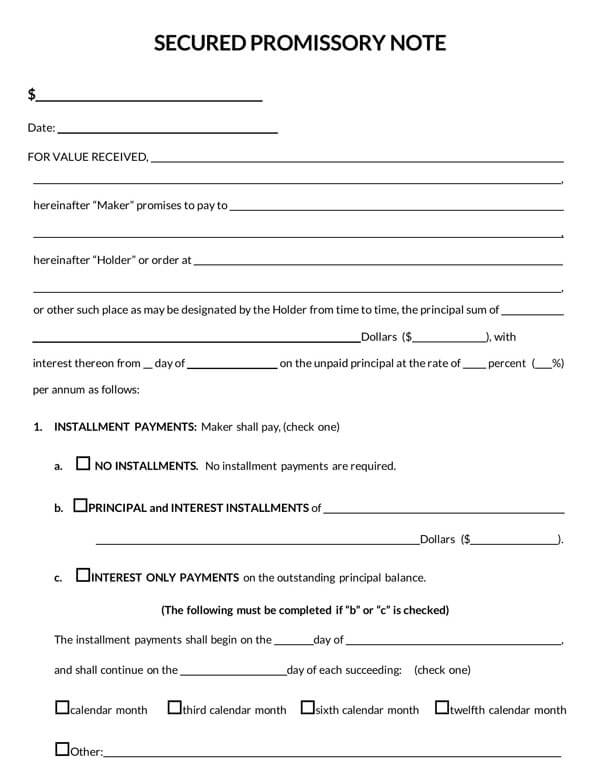 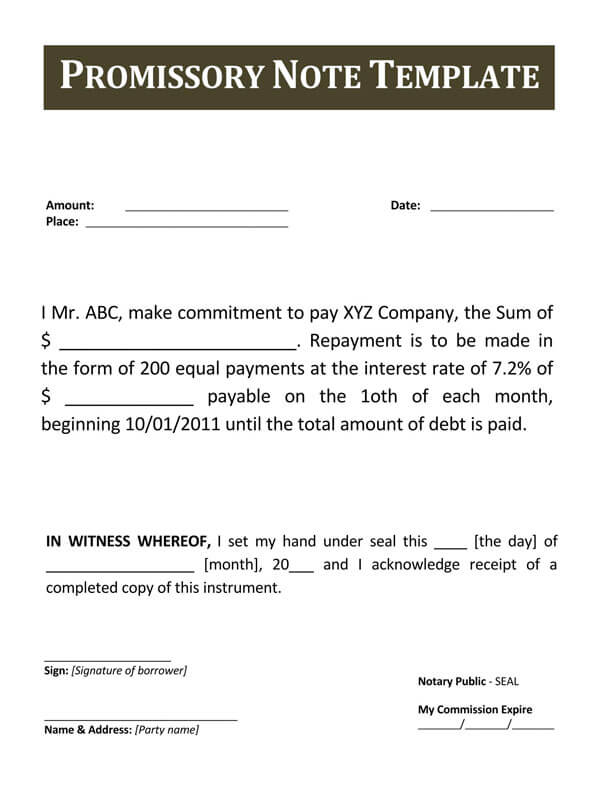 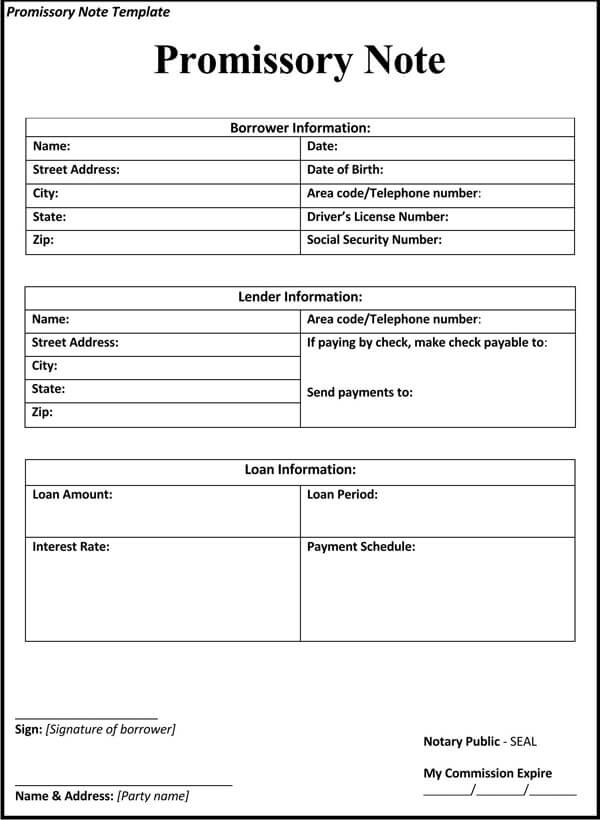 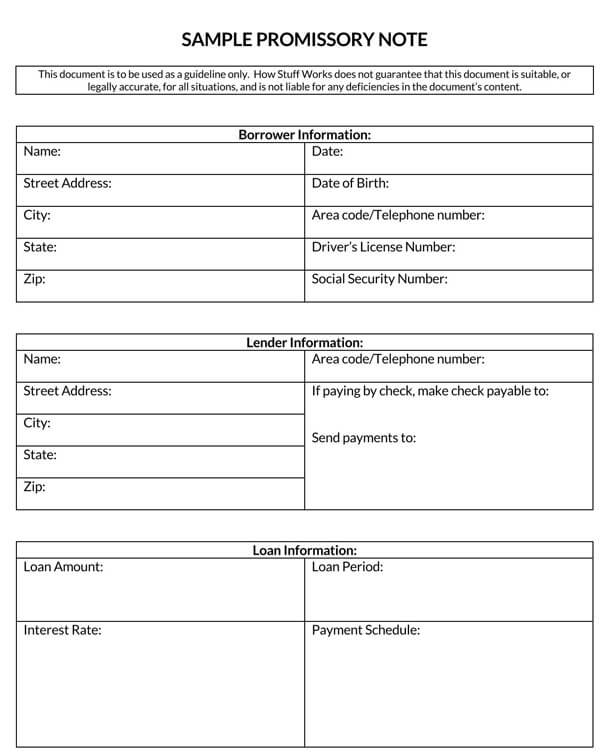 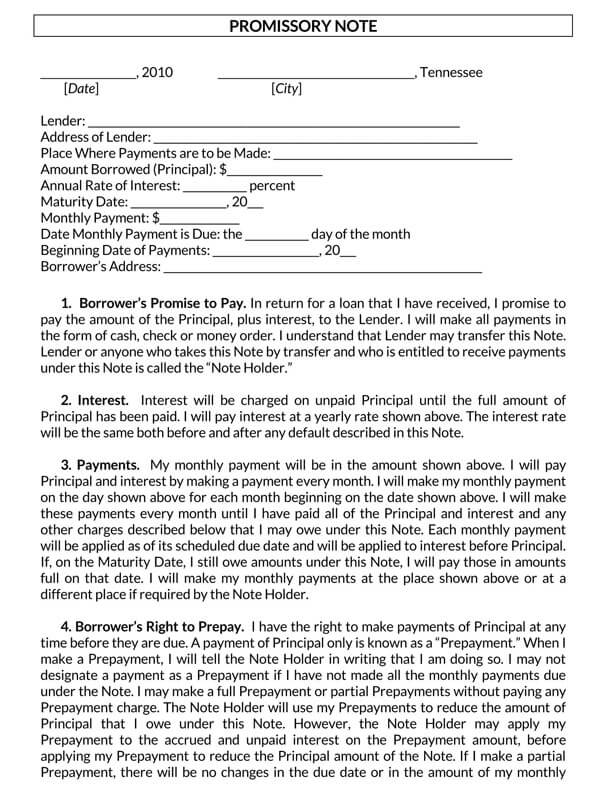 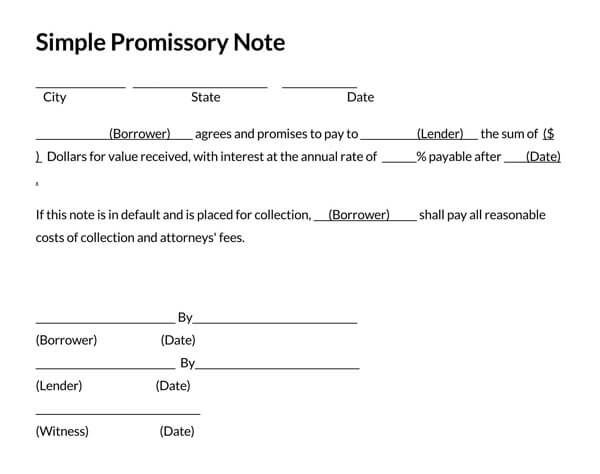 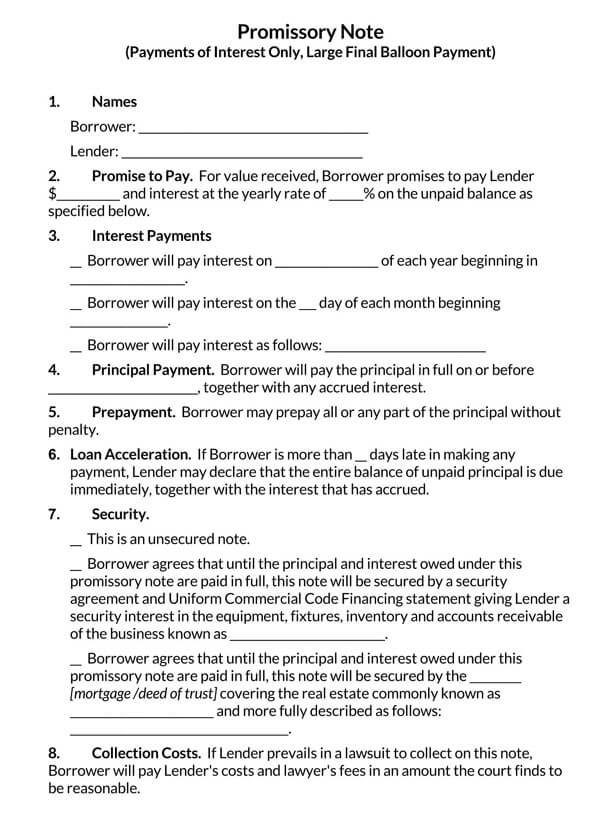 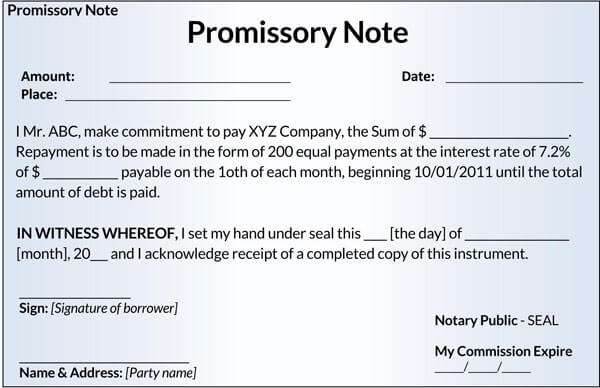 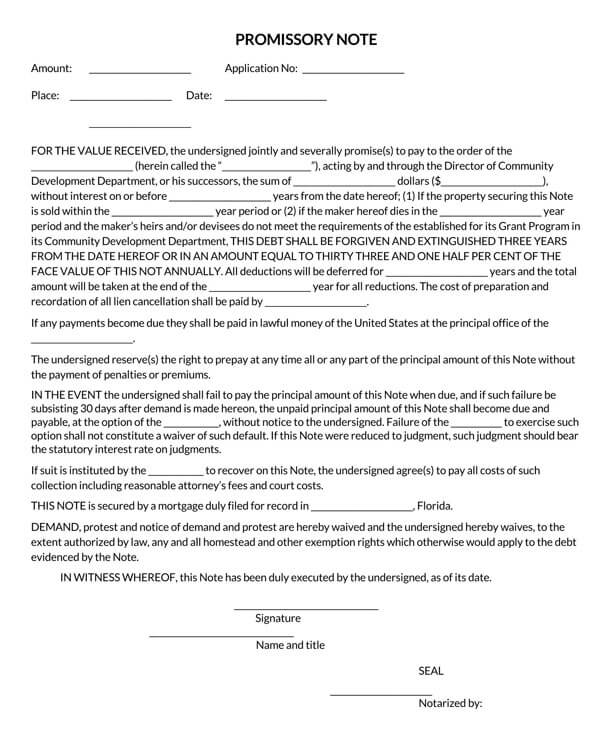 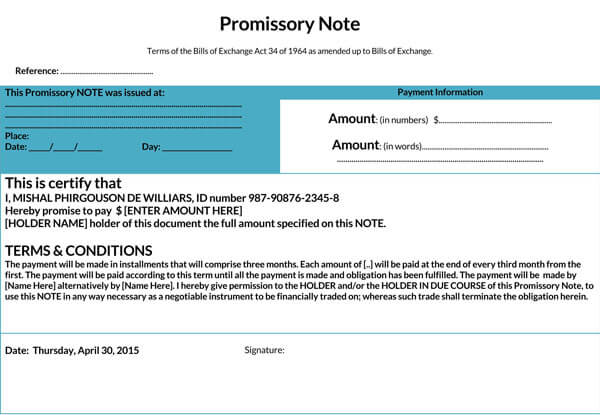 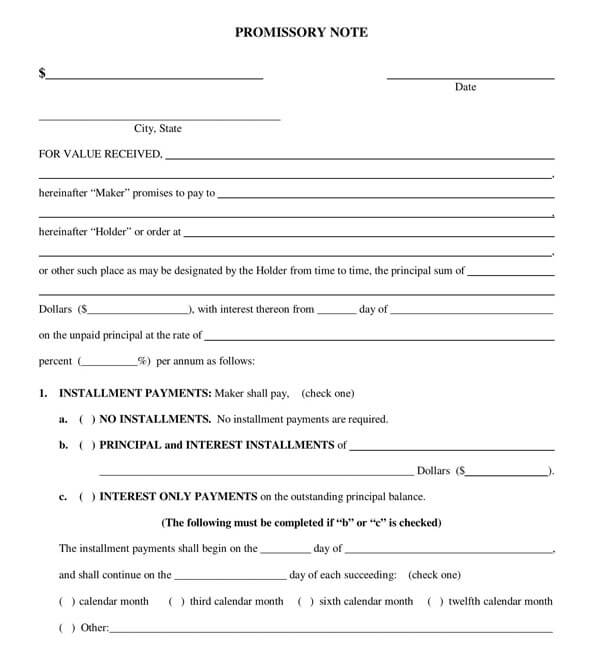 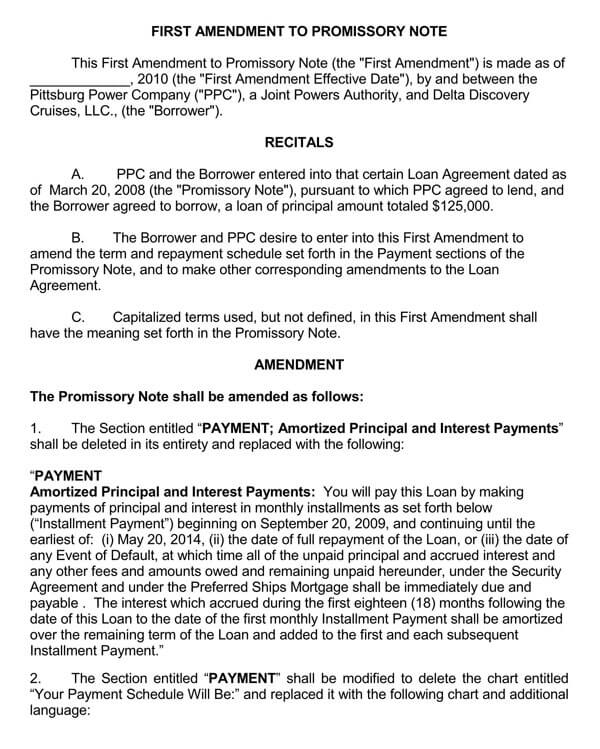 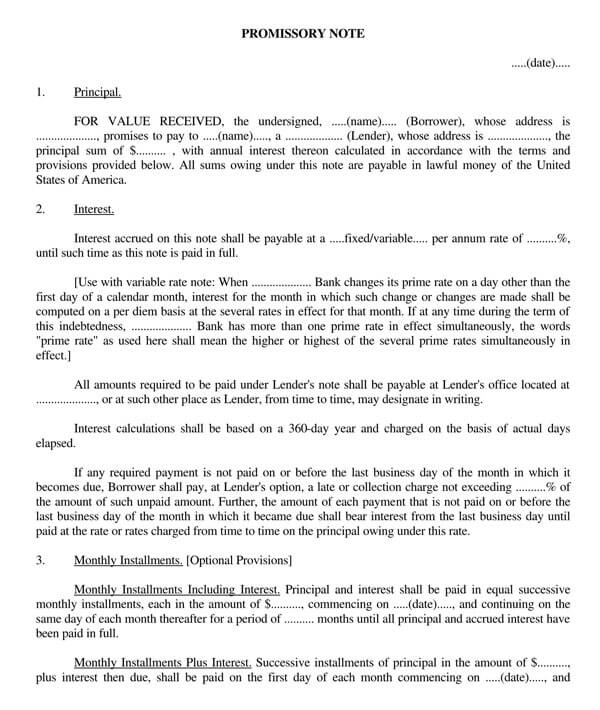 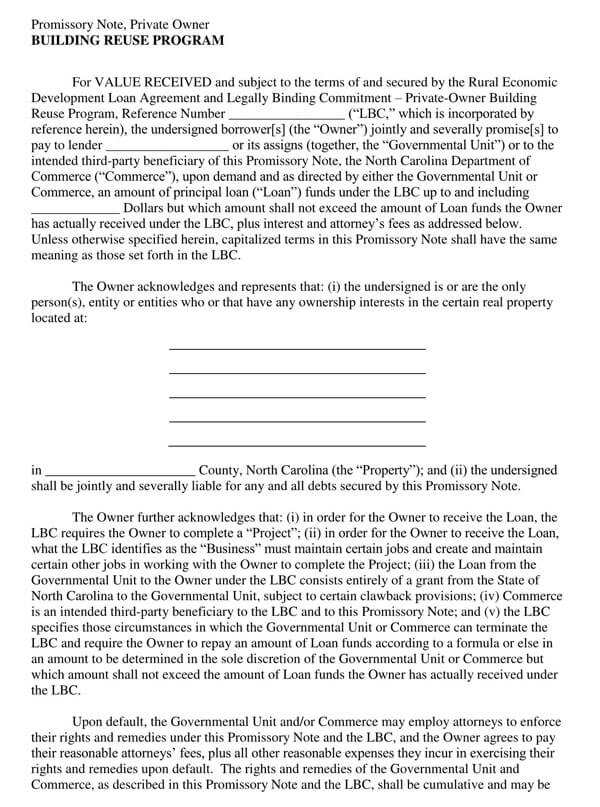 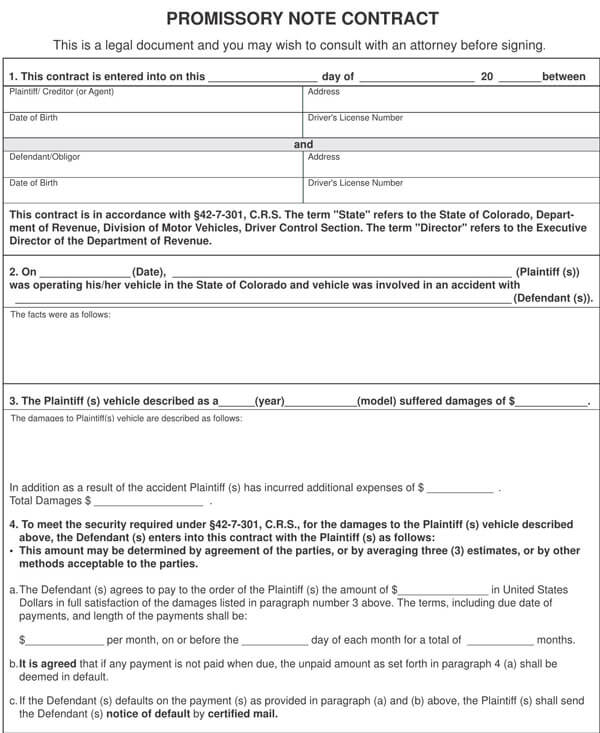 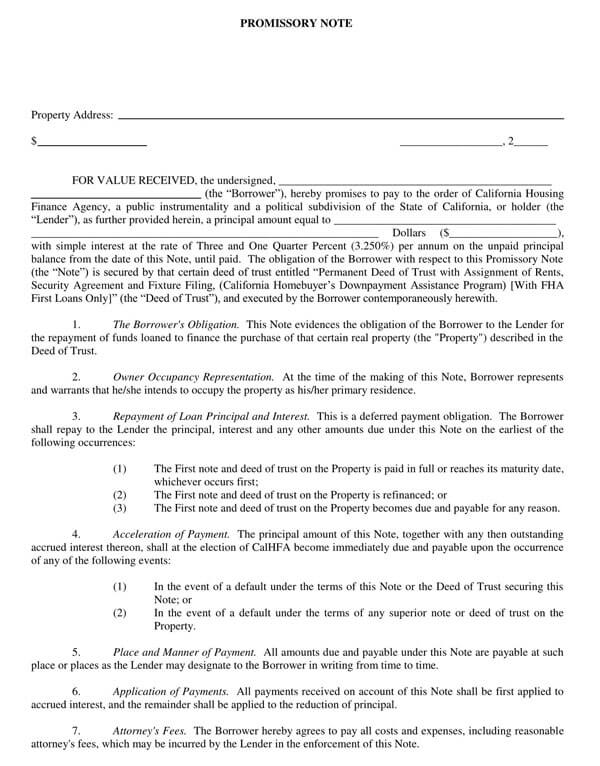 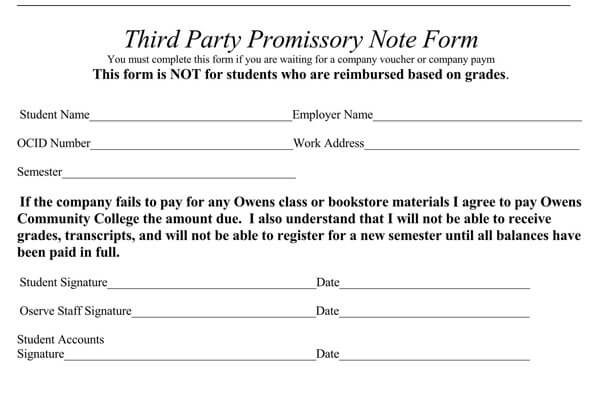 State laws limit how much interest rate can be imposed on borrowers. These state laws are known as Usury rate laws. The limits provided under different states are as given below.

Should I use a promissory note or loan agreement?

What payment information is needed for the terms of a promissory note?

Generally, one will need to amount owed (principal), the loan interest rate, payment schedule, and preferred payment methods to be used by the borrower. In addition, one can include late fees for defaulters.

What is the difference or distinction between an individual and an entity?

Individuals and entities can be borrowers or lenders. An individual is basically a person where an entity is an organization or institution such as a corporation or LLC.

What information should I include about the borrower in a promissory note?

Primarily, the borrower’s name and mailing address are required. Additionally, their contact information such as phone number or email can be listed.

What are some of the tax benefits of a promissory note?

Can I sell or transfer my promissory note?