Limited Power of Attorney is a document that grants an attorney, often regarded as an agent, the power/authority to make financial or personal decisions on behalf of a client, referred to as the principal.

It highlights the specific actions or responsibilities the principal is willing to relinquish at the moment and those they wish to retain.

An LPOA is terminated soon after the laid-out action(s) is completed, by the death of the client or that of the agent, or at an agreed date. Through a limited power of attorney, the agent/manager is legally and officially permitted to make specified decisions beneficial to the client as seen fit without contacting the client. Some of the actions that are usually handed to the agent include access to safety/mail deposit boxes, tax filing, bank accounts, retirement benefits, and other financial and legal transactions. However, the client remains to be liable for the consequences that emanate from the decisions made.

An LPOA is often implemented when;

Some of the alternate names of an LPOA include;

There are various types of limited Power of Attorney documents that vary depending on the situation and duration of the document.

With this type of LPOA, a specific event must first occur for the LPOA agreement to become active. This means the agent cannot make any decision prior to the said event. Such an event could be in the case of death or incapacitation (mentally or physically) of the principal/ client. A springing powers LPOA is usually prevalent during inheritance through a will or a family living trust.

Since a limited power of attorney does not grant the agent full authority to carry out the client’s responsibilities, it should state the extent to which the agent can make decisions and situations when the client should be consulted to give a say so or signature.

For example, for an investment manager, the manager’s responsibilities could be limited to;

The scope of authority of the agent could be limited by other ways such as;

Time and schedules: The LPOA could sometimes only be applicable should the client be on holiday, sick, on business trips, or any other situation that limits his or her ability to carry out their responsibilities in full capacity.

Documentation: The LPOA is applicable provided all the relevant documentation is in place and appropriately crafted, that is, dated, signed, and witnessed. Additional documentation required by the agent to effectively carry out their duties should also be present, and should they be missing, the agent is not allowed to make any investment decisions on behalf of the client.

Revocation: The inclusion of a revocation clause tackles the issue of revocation of the LPOA should need be. It acts as a contingency measure to void the agreement should the services provided be unsatisfactory to the client and can be used to limit the authority of the agent by providing conditions or circumstances that would prompt activation of the revocation.

Components of a Limited Power of Attorney

There are several components that can be found in a standard Limited Power of Attorney. A client should ensure that each of the components is present as this ensures that all the relevant information in a limited power of attorney is included.

This section dictates the length of the period in which the agent can exercise his or her authority in making decisions on behalf of the client. The term could be temporary or permanent. For temporary LPOAs, the duration could be a day, week, months, or years.

The number and frequency of actions

This section basically highlights the responsibilities which the agent can fulfil on behalf of the client. These responsibilities can be described in terms of the number of activities, e.g., signing of one or two contracts and/or how many times the agent can do the said actions; for example, is it filing taxes annually and for how long?

Specific details of the limited authority

Any other information that describes the agent’s responsibilities should be provided. This can include urgent decisions that would be for the client’s benefit, the validity of the limited power of attorney under unprecedented events, etc. As a client or manager, it is important to clearly understand what is needed from the other party, where details are vague, requesting more information is necessary.

An indemnification clause can also be included to protect the principal should the manager take an adverse/ unfavourable action on the principal’s behalf. For healthcare purposes, both parties can agree on whether to include the Healthcare Portability and Accountability Act (HIPPA).

It is important to also note that an LPOA can be attained via online, but witnesses are a requirement even in such a case. Since an LPOA is guided by the state laws of your state of residence, should the principal move to a different state, they should consult local attorneys to ascertain that the limited power of attorney is valid within this specific state.

A limited power of attorney, as discussed, is a legal document which implies that it requires a high level of professionalism when writing due to its significance. Ensuring that it is effectively and efficiently written should be a priority, and this can be a bit challenging for most authors. That is why we have provided LPOA templates that are free and downloadable. Once downloaded, you can customize them accordingly. 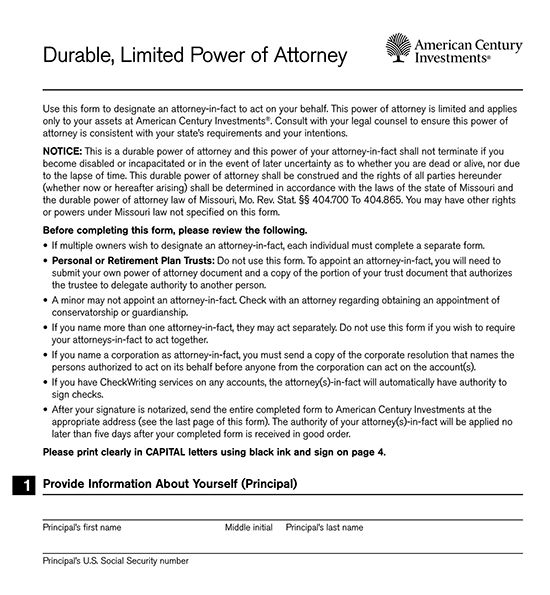 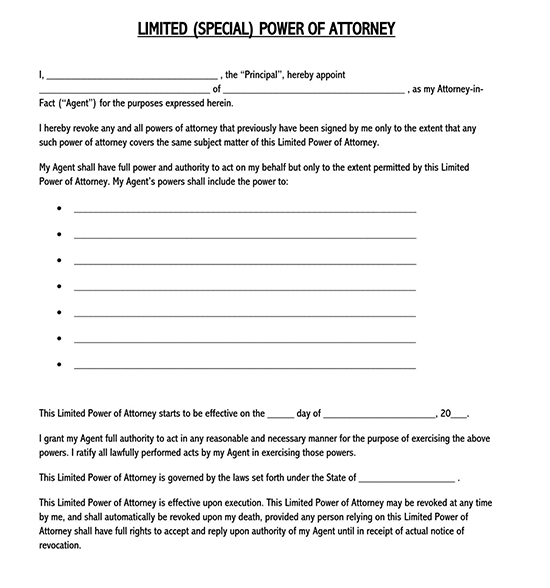 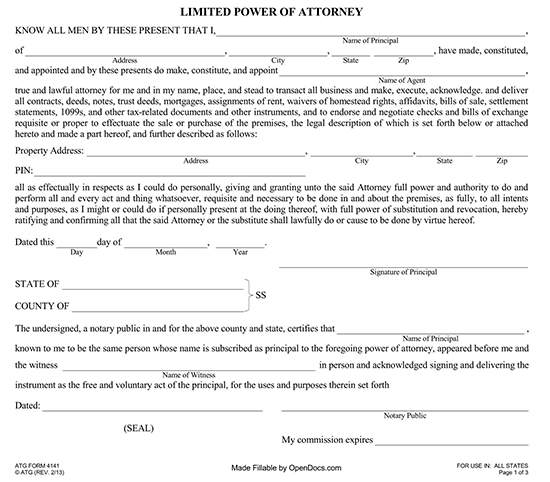 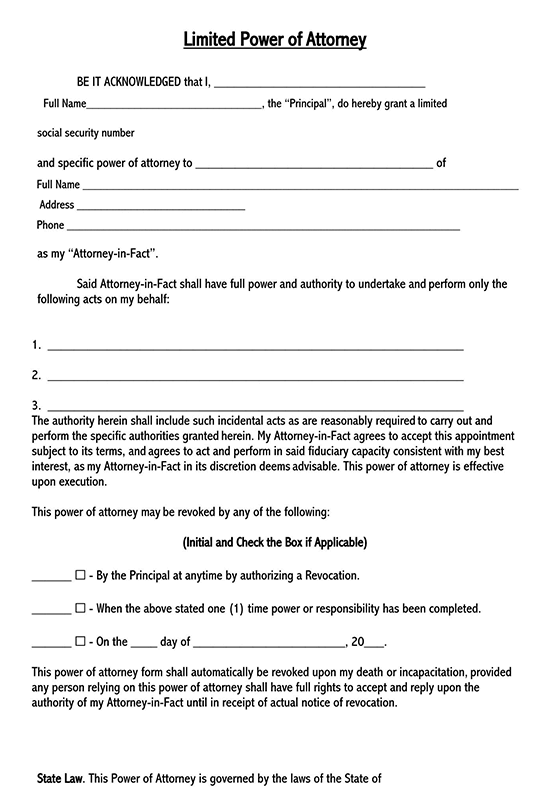 Writing a Limited Power of Attorney

A Limited Power of Attorney is a crucial document as it is used in cases where the wrong decision can be detrimental to both parties. Therefore, it is imperative that it is clearly and objectively written to ensure it is maximally effective with its intended purpose.

Here are the steps one can follow in writing an LPOA:

Remember that limited power of attorney is subject to state laws, and it being a legal document ensuring it meets the laid-out guidelines in your state of residency is vital.

The principal and agent’s personal information

The legal name, address, and contact information of the principal and the agent should be provided at the beginning of the document. This is to clearly declare the involved parties. The principal’s information should precede that of the agent.

Powers of the agent

The next thing should be to outline the activities which the attorney is to carry out on the principal’s behalf. Since the topic of discussion is a Limited Power of attorney, specificity is important as the plan is to authorize the attorney to do some things on your behalf and leave others in the principal’s authority. This limiting aspect of a limited power of attorney could sometimes mean for the implementation of some decisions, both parties’ identities are required for identification. This necessitates further personal information such as a social security number, EIN of a business, etc.

This step aims to highlight how and when the limited power of attorney is expected to be terminated or revoked. If the LPOA is temporary, one should ensure they include the effective and termination dates of the agreement. Within this period, the attorney has the power to carry out the mentioned actions. If the document’s validity is expected to expire upon completion of the allocated activities, it should be declared here. A revocation clause can be included should termination of the limited power of attorney be necessary under exceptional circumstances such as the death of one of the parties, completion of the action before the expiry date, etc.

The next step is providing a statement that declares the state laws that govern this limited power of attorney agreement. This is automatically the principal’s state f residency. This section is important as the regulations are meant to protect the principal.

For the document to be legally binding, the principal and the agent are required to sign. Both signatures can be done after the state laws declaration if at all no acceptance and appointment clause is needed.

This is given in the form of a statement or clause that declares that the attorney has read and agreed to the contents of the LPOA. It is inserted after the principal’s name and followed by the agent’s signature and name. This clause is a requirement by some states; therefore, it is important to confirm and proceed accordingly.

The final step involves confirmation that the document was agreed upon in the presence of witnesses. Two witnesses are required as the minimum. Witnesses should be from a neutral third party. A public notary is also needed as a witness to validate the document, especially in a court should the need arise.

The validity, extent, and considerations of an LPOA are set and agreed upon by the two parties (principal and manager). Through an LPOA, the attorney is legally obligated to take action in the principal’s best interests at all times and may be liable for breach of their duties as per the limited power of attorney. Even if the attorney is a friend or relative, they are entitled to compensation/pay of some sort

When a client is opening or allowing access of an account to a portfolio manager, usually an attorney, they must first fill the power of attorney form. The form is used to outline who the designated attorney(s) is by providing their details. Most of the forms will provide the client with the option of using a Limited or full power of attorney.

The form is officiated with all involved parties signing. Where the portfolio manager is an attorney, for example, a talent manager, consulting an attorney before signing is highly recommended.

The guidelines to be observed with the use of a limited power of attorney will often vary from one state to the other. Therefore, it is significant to first check the regulations in your state, and you can expect variations within the following States.

When Does a LPOA Terminate?

An LPOA can be terminated under a wide range of occurrences, for example, when a laid-out term or condition is either met or unfulfilled. The conditions of termination can be agreed upon and could include death or incapacitation of the client or the agent. State laws also make provisions by which an LPOA can be terminated; for example, in a case where the agent was a spouse, divorce translates to automatic revocation.

Revoking a Limited Power of Attorney

Say a principal, after opting to use a Limited Power of Attorney, does not intend to make durable or the arrangement proves to be no longer beneficial, there are various ways an LPOA can be revoked.

A Limited Power of Attorney can be a very essential document for a wide category of people, from business owners to parents who have busy schedules and wish to have another person (attorney) take charge of some of their legal obligations. Regardless of the situation, it is important to ensure that the transferred responsibilities are clearly stated in the LPOA to ensure the attorney operates within their limits.

When writing an LPOA, it is essential to ensure it follows one’s state of residency guidelines. The expiring or revocation methods of an LPOA should be agreed upon to cater to any uncertainties that might occur. With the information we have provided in this article, you are well equipped to come up with a Limited Power of Attorney. Good luck!