Baseball is a fun and popular sport in the U.S. since 1744, which involves two opposing teams taking turns batting and fielding until one of them emerges the winner of the game. From being an ordinary bat-and-ball game in England, baseball was brought to America and was later developed to become the sport that we all know today. For the past 77 years, baseball has been the national sport in the U.S. and is predominantly played in North America, Japan, and Canada.

What is a Baseball Scoresheet?

A baseball scoresheet is a document that holds the details of the baseball game from the beginning of the game until the end. Normally, professional baseball leagues hire official scorers to record the official scoring of a game, but many die-hard fans usually keep a copy for themselves.

Invented by Henry Chadwick, the baseball scorekeeping uses two baseball scoresheets- one for each team- to record the game information, its play-by-play action, and the battle lineup. The stats of both sides and each player’s total at-bats, run, hit, etc. at the end of the game.

Whether you are looking to keep the official score of a baseball game or just like keeping track of the score at a game you are watching, we got you covered. We have several baseball scorecard templates that will not only save you the time to create one but will also come in handy when you are required to keep track of the scores.

You will realize that for the battlers, there are three groups of columns: the game log, the lineup, and the totals. While the first section that you will find notice is the lineup, it is important to pay attention to the squares for the game log as you will need one lineup slot for each row of squares. Most baseball scoresheets usually have multiple lines for each row of a square for substitutions like pinch runners or pinch hitters.

Before the onset of the game, you will want to fill in the batting lineup and the uniform numbers and field position of each player. Consequently, you will also want to put the lineup on the opposing team’s pitch tracker and the pitcher’s name.

For the game, the middle column of the baseball scoresheet should have at least nine columns, one for each inning of a standard baseball game. After the team at bat lists their third out, you will then put a mark on the lower right corner of the box for the last hitter and then shift to the next inning for the next batter. As extra innings are possible in the event of a tie, it is advisable that you have an extra baseball scoresheet available in case it is needed.

For the game log, you will need the following shorthand and abbreviations to ensure that you have consistent and concise notes for the match.

You will also need the following numbering system for fielding positions:

For the pitch tracking sheet, you will see a section for a lineup, another section for pitch tracking, and the third set of the column on the right for totals. Some scorekeepers will occasionally print a sheet for each pitcher and even use the same sheet for a team’s pitcher; in the event of a blowout, you may want to include an extra sheet to track pitchers in case there are many hitters faced.

The mid-section of the pitch tracking sheet will have several different columns of boxed with each box divided into three rows, one of the balls, the other of strikes, and the last one for the results of the at-bat. While on the game log, you will have to move to the next column each inning, for pitch tracking, you will have to fill each hitter one below the other, only moving over once you get to the next turn for the first hitter in the lineup.

Consequently, for the pitch tracking section, you may want to use a system to note each pitch type thrown, even though it is not entirely necessary, and you can use the boxes for each at-bat to track the balls and strike with tally marks in the different rows. After the bat has a result, whether a hit or an out, you write that one on the result line. Additionally, you can use the result line for extra strikes if there are various pitches fouled off in an at-bat.

For the pitching results, you may have a little more room to fill out the result, but you will still want to use the following abbreviations and shorthand to get information noted down quickly:

You will also want to use the same position numbering you will be using for the batting section, although you do not need the same level of details.

Despite not being as necessary as the hitting and pitching pages, the fielding page of the baseball scoresheet can, at times, come in handy when tabulating post-game statistics. When looking at the fielding page, you will notice that there are four columns, one for player names, another column for outs, assists, and errors. This section normally required just tally marks, so notation is self-explanatory.

For every at-bat, you will have to record the result in as much detail as possible. While most baseball scoresheets have more than a diamond within the box representing each at-bat, with the shorthand and abbreviations mentioned earlier and a few other markings, you can create detailed notes for each game on the baseball scoresheet.

If the hitter secures a base hit, you can note down the type of hit a home run, single, double, or triple in the lower right corner of the box and mark over the diamond to the base reached. If the base hit drives in-runs, you can write that in the lower-left corner, if possible, with tally marks for each run hit in by the batter. Additionally, a line from a home plate or a dot can show where the hit landed, using the diamond to show the infield and beyond it.

If the player is hit by a pitch or draws a walk, you can write that down in the lower right corner and then draw a line from the lowest corner of the diamond to the right corner.

For the runners that are on base for an at-bat, you will have to keep track of their movements on the bases. This is usually done by drawing the bases advanced by clearly highlighting each side of the diamond corresponding to the point reached. If the player advanced with a wild pitch, passed ball, or a stolen base, you can note that for the baserunner and you can show it on the hitter the event occurred in one of the upper two corners of their bat by writing W.P., P.B. or S.B. (or if the player picked off or was caught stealing) and the player’s position or uniform who advanced.

If the batter records an out, depending on the type of out, there are various ways to note this. If the hitter strikes out, you write a K in the middle of the diamond. Some scorekeepers normally reverse the K if the batter struck out on a called third strike. If the batter grounds out, you would write the position or number the ball was hit too, and then add a dash followed by the position of the player recording the out.

Consequently, in situations where the runner is forced or tagged out, but the batter reaches first base safely, a fielder’s choice is ruled in such cases and you would note down the out on the runner’s box but would put F.C. on the batter’s box with a highlight to first base.

Pitching, though not as complex as scoring hitting, can be rather difficult if many details are left out. Unlike the hitting page, the scoring pitching on the baseball scoresheet does not break down pitching by inning but instead uses a plate appearance. In most cases, dependent on the level of detail, some baseball scoresheets will fail to include sections for detailed tracking of pitching.

The fielding page on the baseball scoresheet allows one to keep track of the putouts, assists, and errors for all players. The best way to do this is to list down each field player by position, and then put a tally mark for each putout, error, and assist. At the end of the game, you can tally the marks and determine the number of each stat each player accrued.

Following are printable baseball scorecards that can be downloaded for free: 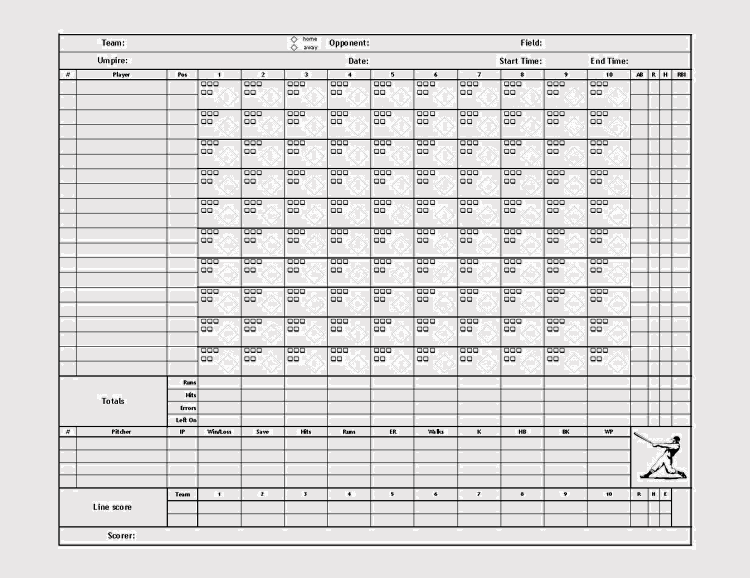 Keeping score on a game can be a fun way to have a record of a baseball match you attended or a simple activity to provide stats for parents, coaches, fans, and media, especially broadcasters or media members. Our printable baseball scoresheets will help you to easily and effectively keep the score at a baseball game.