Notice of Default on Lease Agreement

A Notice of default is one that is issued by either of the signatories (parties) of a lease agreement when they believe that the other party has violated the agreement (breach of contract).

A notice of default can be issued for distinct reasons. Examples of such reasons include;

A default notice gives the at-fault party an opportunity to cure the problem, while an eviction notice means the tenant should vacate the premises as directed.

Note: Default notices should be in writing, and all parties (landlord and tenant) should keep copies.

Reasons to be Served a Default Notice

Lease agreements are usually pro-landlord; as a result, there are many provisions in a lease agreement that a tenant is obligated to uphold or otherwise face contractual consequences. A tenant can be served with a notice of default on a lease agreement for the following reasons.

Damage caused to the property – Lease agreements stipulate how property damage should be handled. When landlords carry routine inspections and identify damage to property that has not been attended to, they will usually issue a notice of default on the lease agreement urging the tenant to take the necessary actions as obligated.

Non-compliance with parking requirements –If a tenant violates the parking provision of a lease agreement, a landlord can issue a notice of default. This is prevalent in commercial properties with shared parking spaces.

Late rent – A default notice for late rent payment is one of the most common notices issued in leasing. Late rent does not automatically translate to non-payment; however, issuing a notice of default on lease agreement ensures it does not escalate to that. Instead, a tenant is given a grace period to make payment. As a response to the default notice, tenants can provide an explanation as to why the issue arose in the first place. A late rent default notice should be sent as soon as the monthly rent is past its due date.

Non-payment of rent – Situations arise where a tenant is unable to pay rent. The definition of non-payment will usually depend on the contractual terms and state housing laws. Therefore, it is important to first confirm with state laws. In such a case, the default notice precedes an eviction notice or termination of lease.

Unpaid utility bills – In commercial property, if one tenant fails to pay their utility bills, the landlord will often have to meet the costs to ensure other tenants are not inconvenienced. He or she, in turn, will be required to serve the at-fault tenant a default notice letting them know of the violation to prevent repetition and get their money back.

Illegal activity – If the landlord identifies or is alerted of illegal activities happening with the rented premises, they can issue a default notice urging the tenant to desist from the activities and make them aware of the ramifications they would face if the bad behavior persists.

Incomplete work/repairs – Sometimes tenants move in buildings with uncompleted works such as landscaping, installation of HVAC systems, furnishing, etc., on the condition that the landlords vow to complete them during the tenancy. Also, the building could be needing some repairs such as fixing locks, plumbing, unclogging sewer systems, repairing broken windows, etc., for it to be fully functional. If the landlord fails to honor the agreement in these two scenarios, a tenant can serve them a notice of default on a lease agreement.

Non-payment of property taxes – In a lease agreement where the landlord is responsible for settling property taxes, the landlord is expected to face the consequences if they fail to pay and on time. A notice of default on lease agreement can be issued to alert them of their mistake and urge them to take the necessary steps or otherwise face severe legal ramifications.

How to Write a Notice of Default

An excellent notice of default should be compliant with state laws and lease agreement terms. This means the contents of one default notice will vary from one to the other. However, a formal lease default notice should have the following fundamental components discussed below.

Firstly, a notice of default should be dated. This is the date when it was created. The effective date is important should the notice be used as a reference when resolving the issue at hand. Therefore, the date should be supplied to show the date, month, and year.

Secondly, the notice should identify the premises associated with the lease default notice. The property is identified by stating its location. The address shows the official street address, city, state, and zip of where the property is located.  The address information should be presented as follows;

Note: The state laws of where the premise is located are used to govern the lease agreement and the requirements of the default notice.

This Notice of Default is being served in accordance with the Lease Agreement between Mr. Henry (lessor) and J.P Hemmings Consultancy (lessee) dated 11th June 2020.

The notice should then describe the issue at hand. The author of the notice should give a detailed description and clearly demonstrate how the other party has violated the lease agreement. For example;

This Notice of Default is being issued due to the following violations as per the lease agreement in place: Damage of property – as per the inspection carried out on 30th November 2020, 3 broken windows were identified on the second-floor room 209B. No evident steps of repair were observed.

Number of days to correct the lease violation

The notice of default then states the number of days awarded to the at-fault party to remedy the issue. This grace period begins from the official date of issuance of the notice. The issuer must consult local, state, and federal laws for the government to direct how much time should be allocated for some violations. It should appear on the notice as follows;

The named party is expected to take corrective measures within 15 days after the effective date of this notice. Failure to do so shall be deemed a lack of commitment to the lease, and I will result in taking more drastic measures as permitted by the Lease Agreement. This includes termination of the lease, retaining the deposit, and/or legal action as seen appropriate with the situation at hand.

Signature of the issuing party

The issuer should then provide their signature and name as a way of validating the notice of default on lease agreement.

Finally, the issuer should leave contact information that the accused party can use to respond to the claims if they feel they are wrongly accused or want to take accountability. For example;

You have been awarded 10 days from the date when this notice will be issued to take the necessary steps in accordance with [the lease agreement, section/clause/provision addressing the violation in the agreement] to correct the outlined concerns. Should the named party fail to do so, we shall exercise our right under the Lease Agreement to protect our interest through termination of the lease, impose a penalty or take legal action. 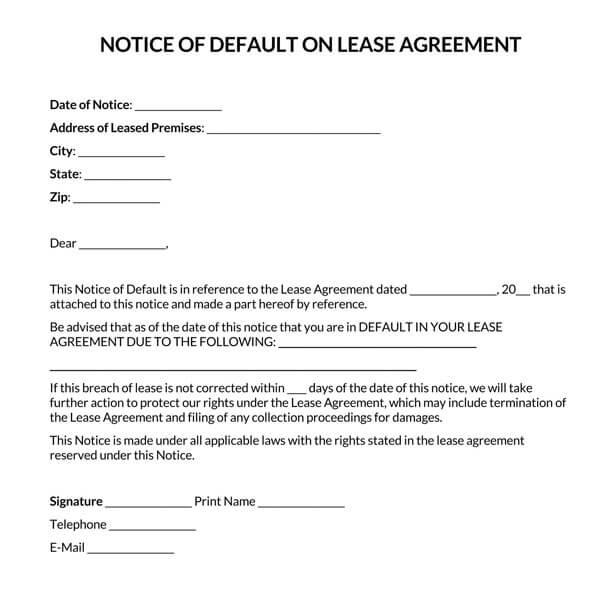 How to Serve the Notice

During the tenancy, misunderstandings are bound to occur from time to time. Some issues might be grave, while others tend to be minor. Depending on the severity of the problem, one can determine whether to issue a notice of default on a lease agreement. Communication should be the primary course of action for non-serious issues. Once this fails, one can seek other options – unilateral or judicial enforcement of one’s rights.

Legal enforcements are typically complex, expensive, and risky. Parties that do not follow the contractual terms and applicable laws before issuing a notice of default are potentially setting themselves up to fail, loss of money, and an uncalled-for counterclaim. That is why the informal resolution is recommended before and after issuing a default notice and during formal and legal proceedings. Discussions should be held on how the issue can be resolved and how to move forward – if eviction is an alternative, both parties can agree on how to ensure there is a smooth transition.

If informal resolutions do not bear fruit, formal proceedings can be sought after. Most states and lease agreements will have a laid-out procedure on how notices can be issued. Typically, a notice should be issued with certified mail with a return receipt. A return receipt can be presented in court as evidence that the accuser followed the correct procedure and would therefore hold up in court.

Consulting the lease agreement – Lease agreements will often have a variety of conditions that protect both parties from unlawful accusations by including contingencies and clear notice requirements. One should ensure that the issue at hand has fulfilled the precedent conditions before resulting in issuing a notice.

Consulting the applicable laws – Lease agreements are governed by government laws. Therefore, issuing a notice of default on lease agreement that goes against the provision of the governing laws would be termed unjust and might result in the at-fault party bypassing their contractual obligations.

Can a landlord be served a default notice?

Yes, a landlord can be served a default notice if the tenant is convinced that he or she is in breach of the lease agreement. Lease agreements and state laws are created in a way that the tenant is protected too before and during the tenancy.