The hairdresser or barber utilizes the space to provide professional hair care services such as hair treatment, haircuts, cosmetology, and color processing. The hairdresser or barber becomes an independent tenant and not an employee of the salon owner. The agreement is meant to protect the interests of both parties by ensuring they meet their agreed-upon requirements

The agreement can also be referred to as a:

A Salon (Booth) Rental Agreement is usually used when only the booths or chairs have been rented out to the hairdresser in return for a (%) of his/her sales.

Salon (Booth) Rental Agreement is used when a salon functions such that it only charges the hairdresser rent for using their chairs and booths.

What is Included in the Contract

The hair salon independent contractor agreement is an official document that is legally binding. It ensures there is transparency by eliminating any doubts between the salon’s owner and the hairdresser.

Since the agreement is a binding contract, it should contain the names of both parties; the salon company or owner and the hairdresser or barber. The duties and responsibilities of each party such as property protection and repairs, paying for utility bills, and cleaning the workstation are written down to ensure there is clarity on what is expected from them. It must be noted that the hairdresser should not be assigned responsibilities like an employee.

The period of the contract must be clearly indicated by stating the start and end dates. The rent or lease rates should be indicated, as well as the how regularly the payments should be made, either on a daily, weekly, bi-weekly, or monthly basis, and if it should be a fixed rate or commission-based.

If there is a need for the hairdresser to carry insurance obligations, then the minimum amount must be indicated. Apart from setting the date of terminating the contract, a method of doing the same should be decided on so that both parties can have a smooth transition. Provisions for signing the agreement during its termination should be included.

Pros and Cons of the Agreement

Entering into a hair salon independent contractor agreement has its advantages and disadvantages. The provisions of the contract that might be favorable to one party might be unfavorable to the other, and so it depends from whose side the agreement is being viewed from.

The agreement tends to make the salon owner having a feeling of losing control of the operations of the premises. It is attributed to the fact that the hairdresser is an independent contractor, and cannot be controlled like an employee. When there are several hairdressers at the owner’s premises, the environment tends to be more competitive as opposed to being collaborative because each hairdresser works towards outdoing the others. Teamwork may be negatively affected.

Drafting a hair salon independent contractor agreement can be an engaging process, Time and effort should be invested towards its drafting to ensure that no crucial details have been left out, or have been wrongly stated. The process can be made easy by using the agreement template that we have provided. 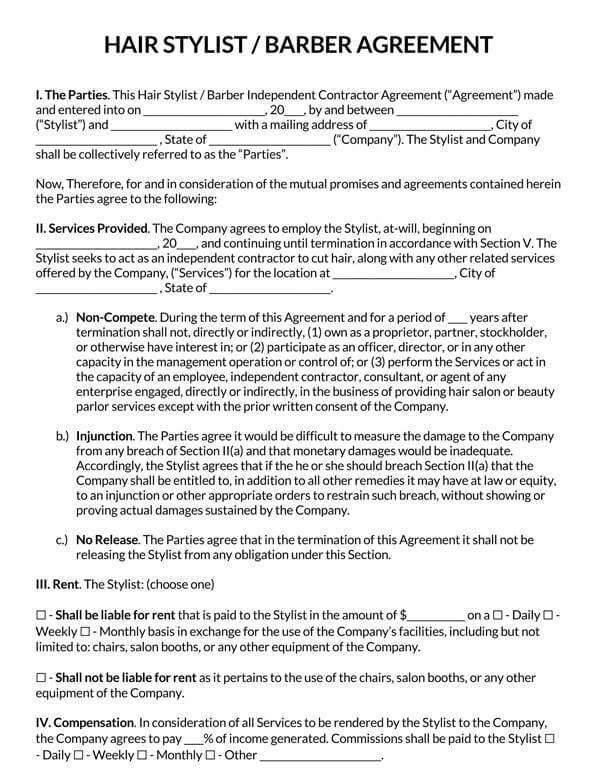 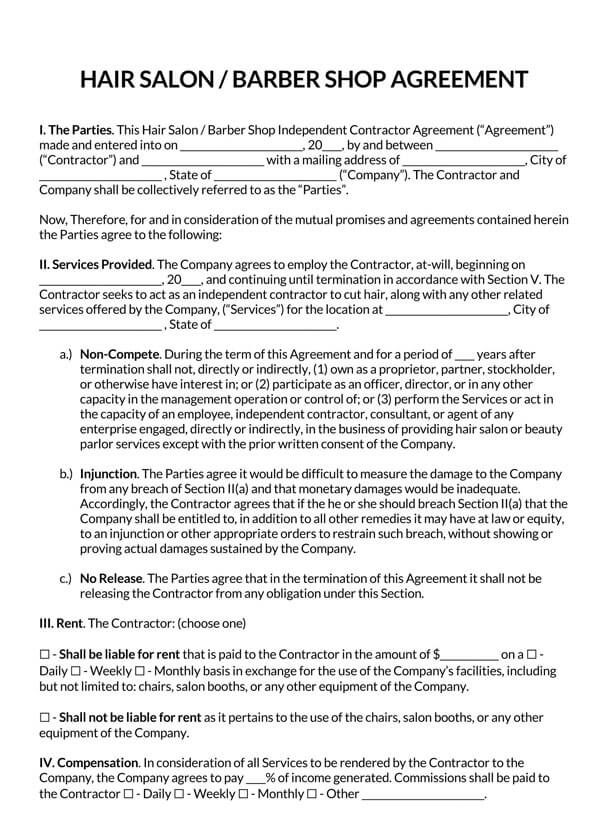 Who Is Accountable For Setting Prices And Collecting Money

The hairdresser is an independent contractor and should, therefore, set their own prices, collect payment from their customers, and ensure the business books are updated and well maintained. The salon owner does not have to issue a paycheck, or request payment from customers on behalf of the hairdresser.

What is considered as Salary and Hourly Rate of contractor Hairdresser

A hairdresser’s salary and hourly rates is not constant because it is dependent on the workflow, location, expertise level, and the variety of services offered to customers. High-end locations attracts higher charges, which translates to more pay to the hairdresser. They can also supplement their income with tips from customer.