The party whose image appears in the photograph is referred to as the “releasor,” and they can legally choose to grant the rights to the images for a fee or for free. The fee charged is referred to as “royalty”. If there is a royalty involved in the transfer of the rights of ownership of an image, the transfer is not final until the payment has been made and the photograph release form has been authorized. By signing a photo release form, the releaser relinquishes any claims that they may have regarding the publication and use of the images in question.

A photo release form may also be described by a few other names such as;

Need for a Photo Release Form

A photo release form is required when a photograph containing a recognizable image of an individual is to be used commercially. Commercial usage includes receipt of monetary gain as well as publications such as a business card or broker or promotion of goods and services. An individual may be hired as a model by an employer or an independent contractor. In a situation such as this, the independent contractor or employee requires a photo release form to be able to legally distribute and utilize photos of the individual for personal or commercial purposes.

There are quite a few situations that may necessitate the use of a photo release form. These situations may differ in the circumstances and purpose for which the photograph is taken, or the individual(s) involved. The following are the specific types of photo release forms commonly used;

When to Use a Photo Release Form

The following situations necessitate the use of a photo release form. For each situation, the table below specifies the releasee as well as the releasor.

To be able to use a photo of another party, either for commercial or personal use, a photo release form must be crafted by the releasee.

When crafting a photo release form, the releasee should consider the following:

The releasee may follow the steps below to craft a photo release form:

Names of the entities

Name of photographer or releasee

The photographer or releasee should also be specified by name. The releasee may also be an employer or independent contractor. Specifying the releasee defines the photo release form to legally bind the releasor and the releasee.

Name of model or releasor

The address and phone number of the releasor must be specified to further identify the releasor.

Details of permissions being granted

The photo release form must contain the details of the usage the releasor is consenting to. This protects the releasor from any legal liability should the release choose to use the photo for criminal activity.

In a situation where the releasor grants consent to the release to use their photo at a price, the agreed-upon payments, royalty amounts and terms must be specified in the photo release form.

All additional provisions must be stated and specified in the photo release form. These include the following:

Date of the release

The date on which the photo release form was signed must be specified. This gives the rights of the releasee a definite start date. 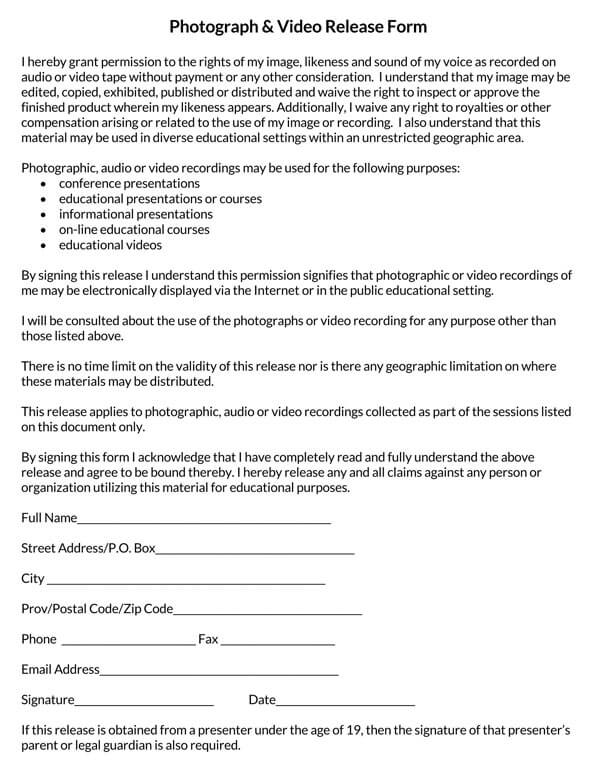 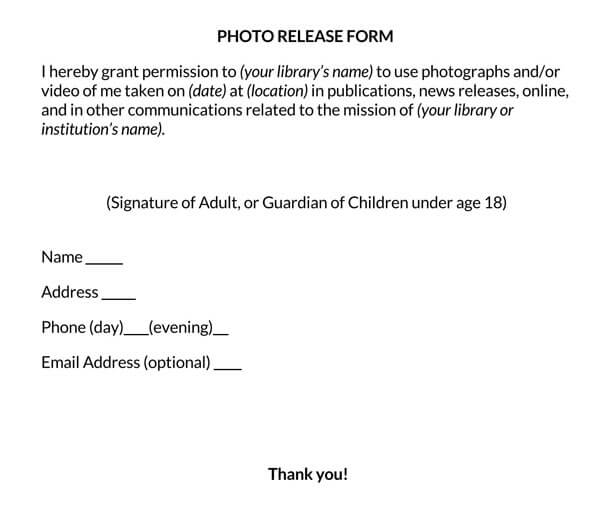 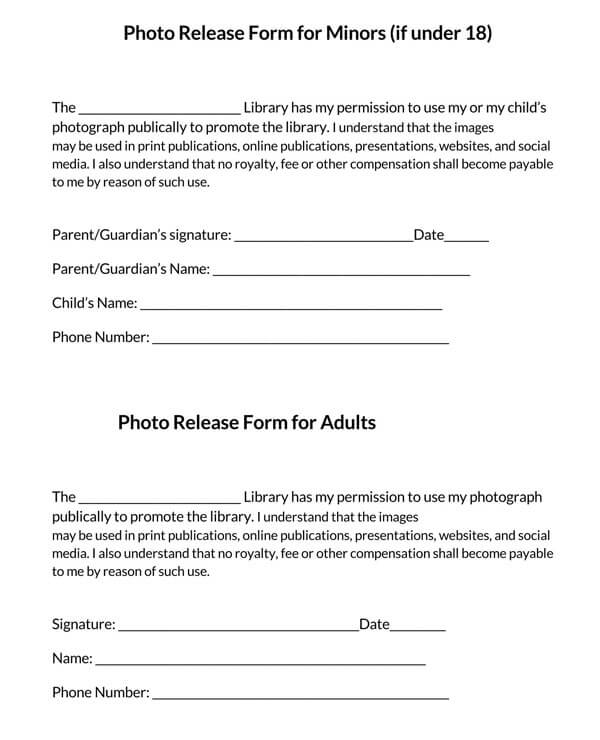 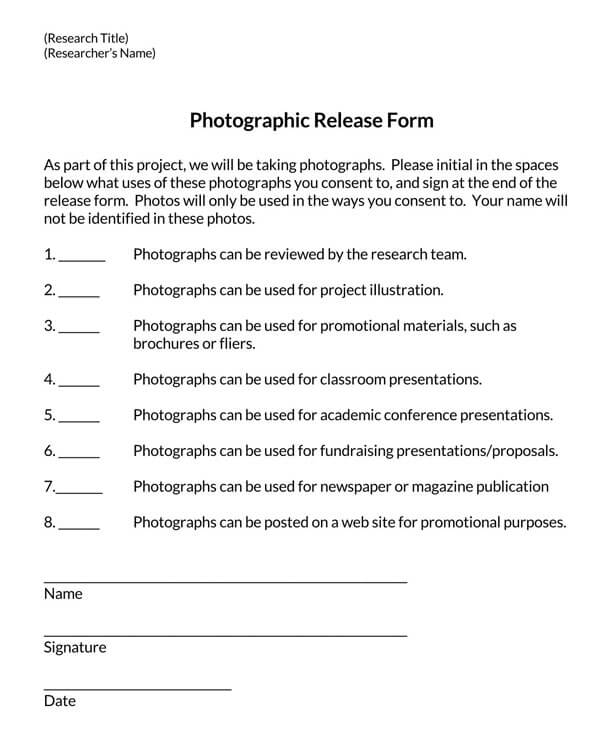 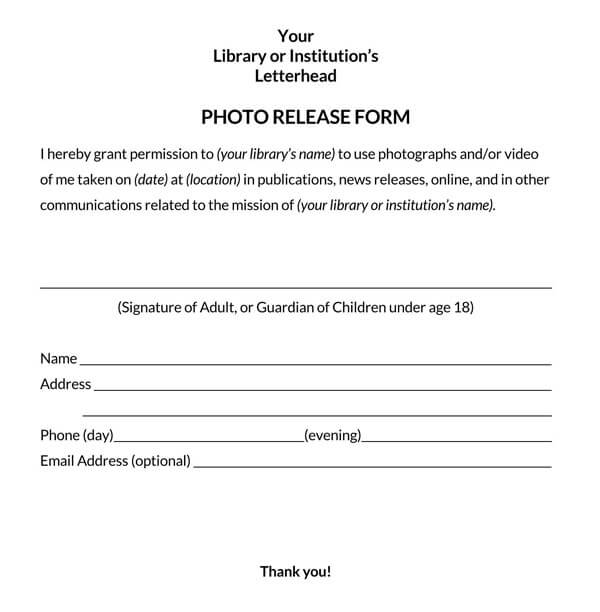 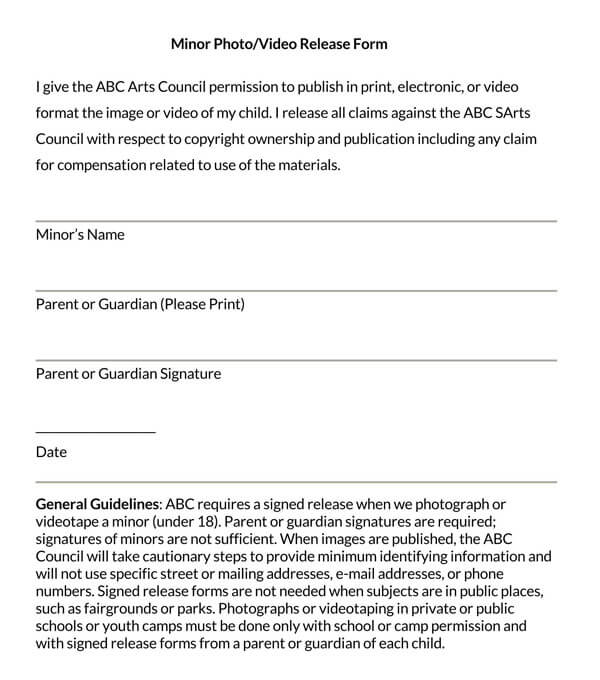 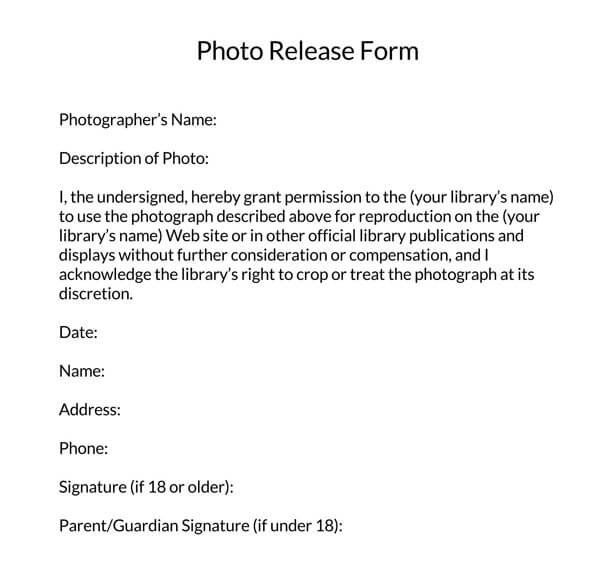 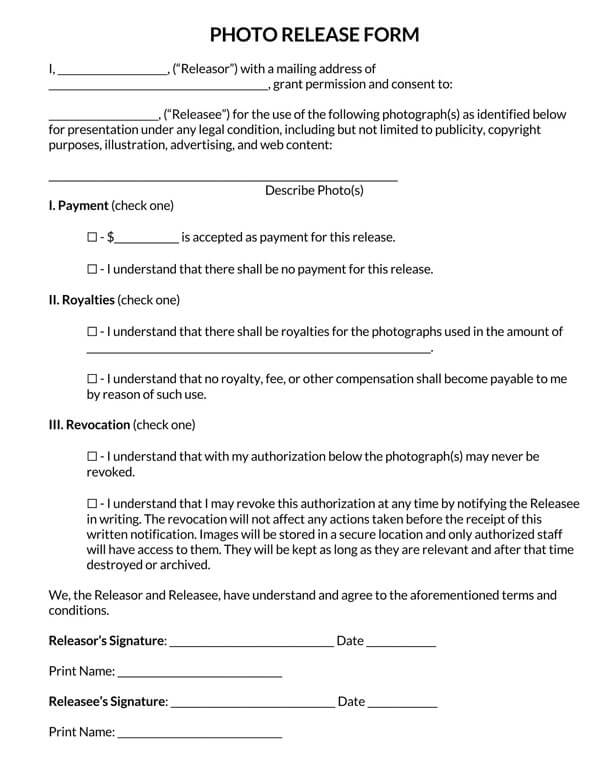 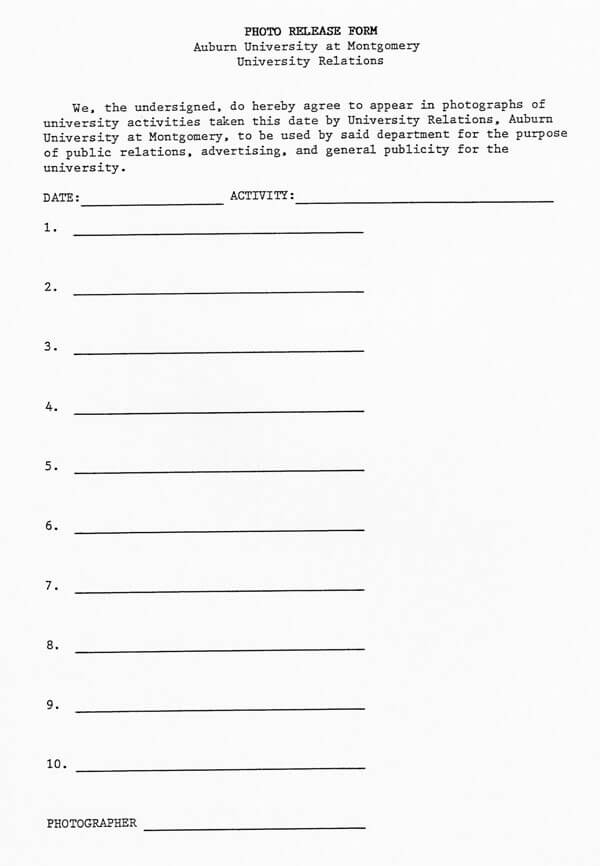 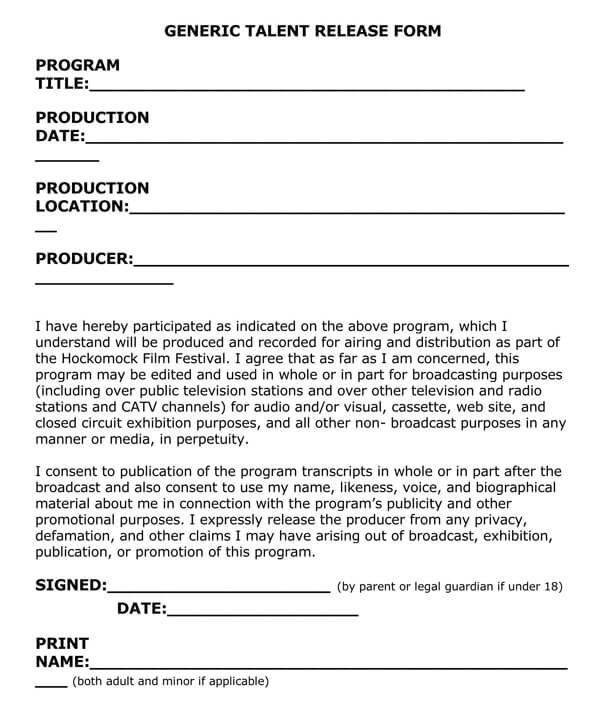 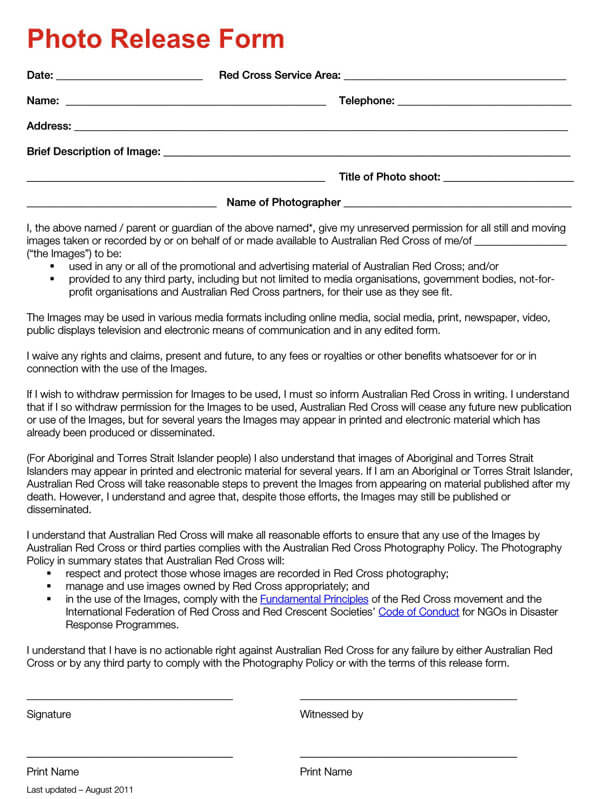 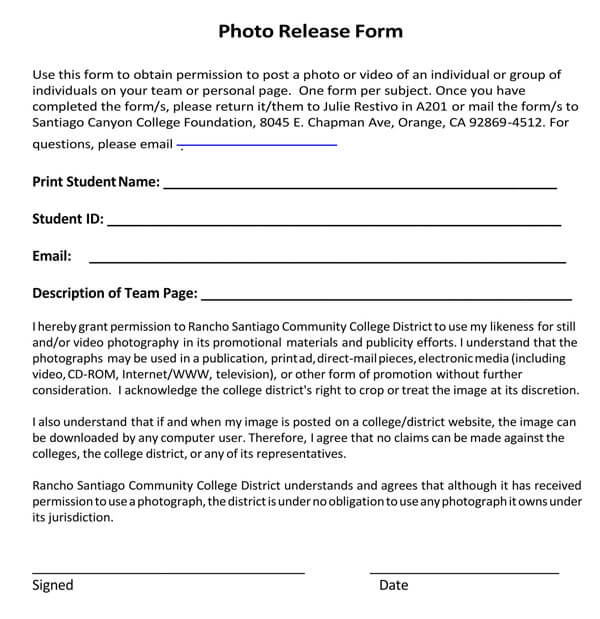 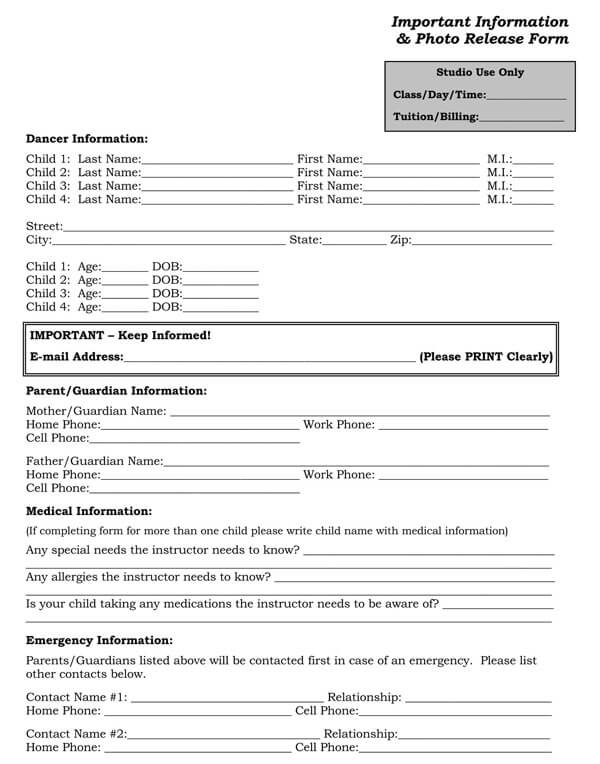 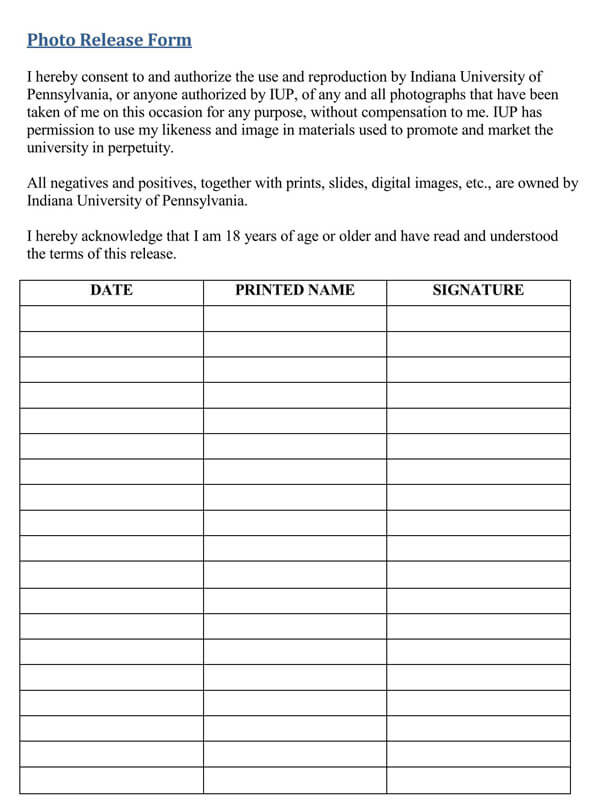 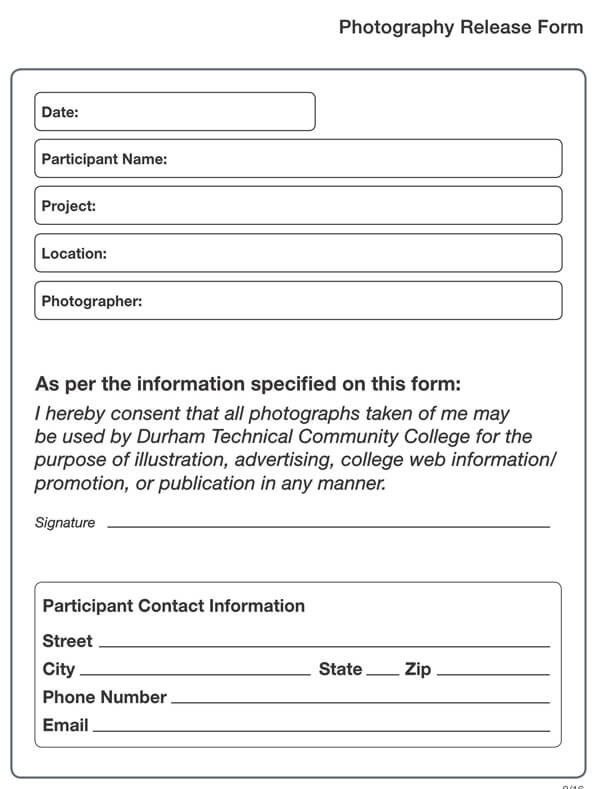 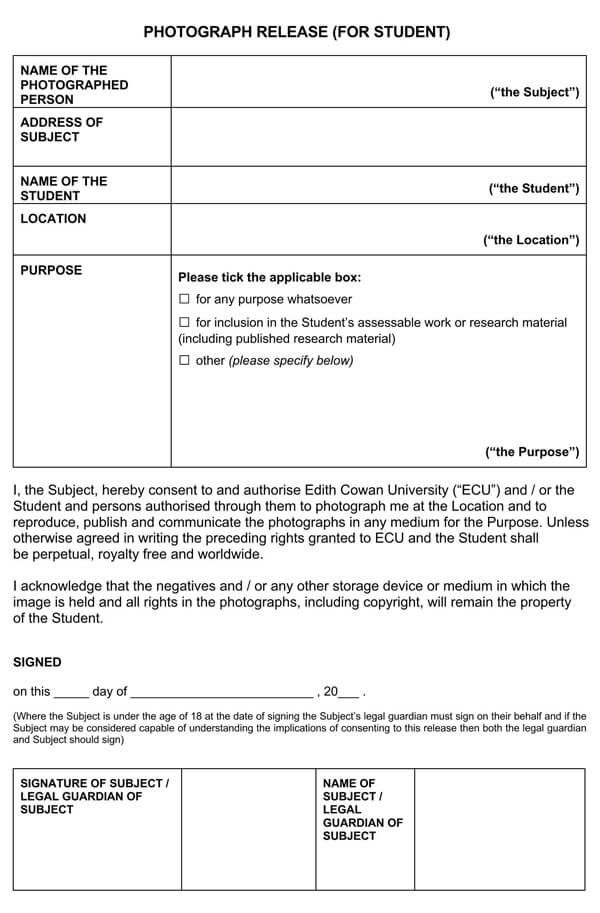 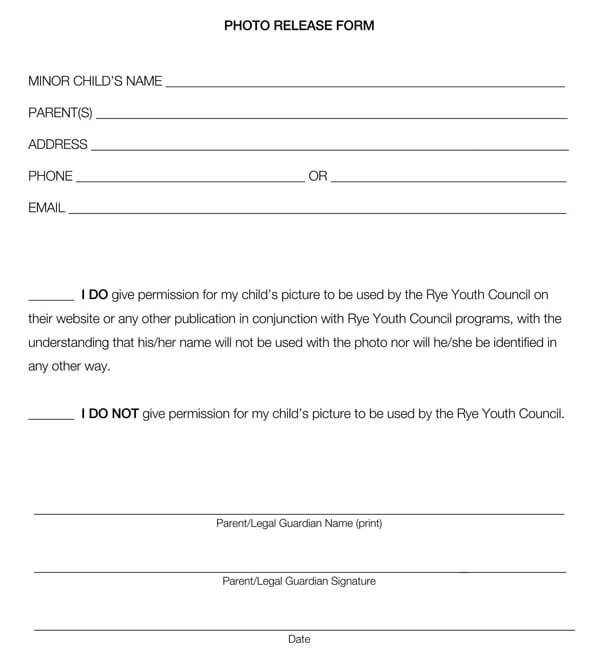 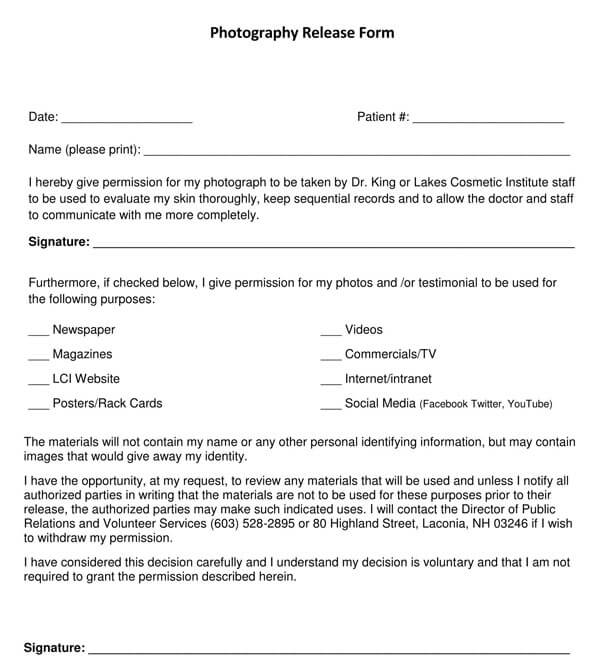 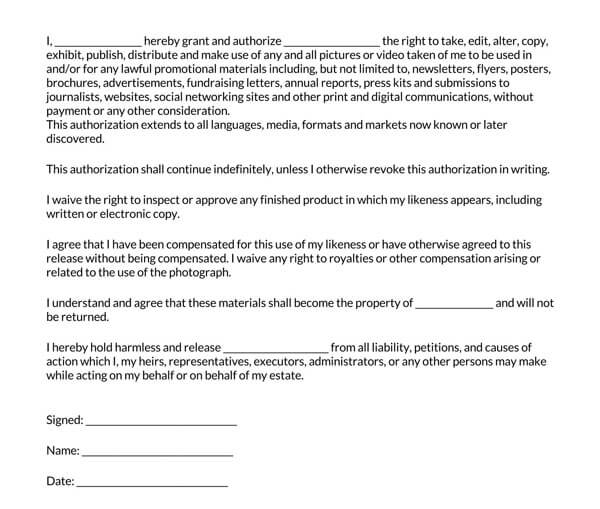 Consequences of not Using a Photo Release Form

When a photographer, employee, or independent contractor does not use a photo release form, the subject of the photograph may choose to pursue a legal alternative for their compensation. The legal case will likely be a lengthy one that will take up a significant amount of time for both the releasor and releasee.

The legal proceeding for seeking compensation as well as for defending against such a suit requires a considerable amount of money for legal fees as well as loss of income as a result of the time spent in court. Both the releasor and the releasee will suffer a considerable loss financially when a photo release form is not used.

The time spent in court, as well as the legal implications of using a party’s likeness without their consent, will constitute considerable mental anguish for the releasee should they neglect to use a photo release form.

The general rule for a photographer taking photos can be broken down into a single sentence: Photos taken in public spaces are allowed, while private properties require permission. This sentence is of course an oversimplification of the legal regulations governing photographers. However, that is the basis for the rules.

Get permission in case of any doubt

Exceptions to the general legal rule

As with most rules, the general legal rule for photography also has some exceptions. A military installation may choose to prohibit photographs in a bid to protect national security. Nuclear facilities may also adopt this rule, in which case a photographer may not be allowed to take photographs. These facilities may have public access areas where photographs are allowed.

Photographers are most commonly confronted when taking photos of people in public places. The general legal rule remains for a photographer to take a photo of people in a public area such as a park. If the subject is in a public area but takes the initiative to distance themselves from other people in the same area, it is implied that the subject has a reasonable expectation of privacy, the photographer should therefore respect this expectation.

If a photographer is taking photos of an occurrence in a public area, an accident, or a fire incident, for instance, a law enforcement agent has no right to seize the photographer’s equipment, nor do they have any right to demand to review the images the photographer has taken without a warrant.

One of the best and most effective methods of dealing with confrontation is to be progressive and stop it before it begins. A photographer may prevent a confrontation by simply providing short, courteous answers that will help people around them understand that they have the right to take photos and that their actions have no malicious intent.

When a photographer is in a public area such as a footpath or highway, they can take photos for both personal and commercial purposes. However, the photographer may not obstruct others or violate any anti-terrorism laws in the course of their photography. In addition, a photographer must not violate the Official Secrets Act.

Areas that fall on the spectrum of a public area can be photographed without any legal issues; however, the photographer should take note that they are not allowed to take a photo of Parliament squares, the royal parks, or Trafalgar Square.

Anti-terrorism in the UK

Due to a rise in terrorist activities worldwide, photographers are often confronted while taking photos of landmarks and monuments, power stations, and bridges. During such a confrontation, a law enforcement agent may attempt to cite the official secrets act or the terrorism act of 2000.

The most important thing a photographer should note about copyright law is that the best way to verify whether or not a photographer’s rights were violated is to consult with an attorney who specializes in intellectual property rights.

The digital Millennium copyright act (DCMA) is somewhat of a complex matter. A photographer can learn about their rights as a photographer by speaking with an attorney who specializes in intellectual property, which includes trademarks and copyrights.

How do I create a photo release form?

Why do you need a photo release form?

Can a photographer use photos without a release?

Do photographers own the rights to their photos?