If you’ve ever wanted to make a film, you should know that it isn’t a simple process. It is a multilayered process requiring expertise in many different fields, with one of the most important things going into getting a film approved and produced being the budget.

You’ll want to convince producers that their money is being used effectively and creatively, for which you’ll need a convincing and professional film budget.

The process is typically split into multiple sections, each of which is allocated towards different purposes, such as casting and post-production, which is why you’ll need someone to walk you through each aspect of drafting a film budget! For these reasons, we’ve crafted a guide on drafting a film budget to help you navigate these muddy waters, so keep reading to find out how exactly you should go about writing a film budget!

The Phases of Production

Films are typically planned and subsequently executed in three distinct phases: pre-production, Production, and post-production. As a result, the budget is split into these phases, with an estimated amount of money being listed under each section. Before we get started with writing a budget, you should know what each section entails:

Pre-production involves the meticulous planning of every detail that goes into film production. Typically, this involves breaking down the script, scouting locations, enlisting your team, casting actors, and assembling a functional unit to work on the film. Additionally, scheduling the film-production process is also included in the Pre-production phase, which lets you determine with much more accuracy and detail how much each day of shooting and post-production is going to cost.

Simply put, this involves the actual, physical act of making the film itself. Production is almost always the most expensive phase of the filmmaking process, from shoot-related expenses to fees that need to be paid. Here, you’ll need to be aware of two distinct costs that go into production – Above the line and below-the-line expenses. Above the line, expenses are things that are negotiated before shooting begins and deal with unavoidable expenses that are essential to the film.

Directors, Writers, Cinematographers, Actors, Sound engineers, and the like are all essential technicians that fall under the ‘Above the line’ category, as their salaries are pre-negotiated. Below the line, expenses indicate dealing with costs accumulated as production continues. This includes a set’s working staff, set design, implementation, technical staff, makeup, lighting, props, and the like. These are often hard to judge beforehand and are included in the budget under the production section.

These are the expenses that relate to the finishing of the film. While production is the act of filming all of the parts of the film, post-production involves things like editing, special effects, sound, dubbing, subtitling, and much more, which all essentially go towards making the film a finished product and ready for the consumer.

Depending on the film itself, you may also have additional costs for things like promotions and marketing, which vary from film to film. For this article, we’re dealing with the actual filmmaking process so that we won’t be touching on the promotional costs, marketing costs, campaigns, and the like. However, this is important to know and consider when budgeting.

What is a Film Budget Template?

A film budget template is a document that provides a level-by-level breakdown of all the costs involved in making any movie. It covers everything from production and cast salaries to travel, food, local and studio rental fees, and marketing and distribution costs. Simply put, film budget templates are a way to track the various costs associated with making a movie. It’s a primary tool that can help filmmakers easily track their expenses, monitor their progress, and better predict how much money they will need to make their films.

How Film Budget Templates can Help?

A well-organized film budget template is a crucial part of any movie-making process as it clearly outlines the most important aspects involved in producing your film, such as how much you spend on each aspect. In addition, a good film budget template will also include information about expected income from sales to distributors. This allows you to see how much money your movie will make so that you can use it to pay back your investors.

Other vital things a well-designed film budget template provides are:

A well-designed template will help you segment every aspect of your film separately. This is crucial because it helps you budget a separate amount for every movie aspect. For example, suppose you’re making a documentary on fashion history. In that case, you can use segmentation to track down all the costs involved in location rentals, equipment hires, and general travel expenses. In addition, you can segment your budget to cover pre-production, production, marketing, and distribution expenses.

A well-designed film budget template will help you estimate the total cost of your movie by providing a level-by-level breakdown for each of the critical elements involved. For example, a good template will have different segments for pre-production, production, and post-production expenses. You can use these to calculate an average daily cost for your film without adding separate costs for every task.

A film budget template breaks down all your expenses into easily identifiable categories. Then, it lets you see exactly how much money you need for each of these. For example, you can use the template to determine how much you need for locations, including any set construction and crew salaries, travel expenses, and general food and drink costs during production. In addition, you can quickly see how much is left over for other areas like cast salaries and marketing requirements by tracking expenses.

Every movie needs cameras, lenses, lighting, and editing software. A film budget template will help you acquire this equipment more efficiently by breaking it down into categories that make it easy to do your research and narrow down your focus. For example, you can use a film budget template to determine what kind of cameras are the best for shooting action films or documentaries. By doing your research in an organized manner, you can get the best equipment for your shoot at the most reasonable price.

A good film budget template will help you manage the entire filmmaking process by tracking all the tasks and informing you how much each phase costs. For example, with a well-designed template, you can track the cost of pre-production, such as research and set construction. Then, with every stage of production, you can break down your filming process into smaller tasks that are easy to monitor. You can also schedule each production phase to see exactly where you are going wrong and where you need to redirect your efforts.

Things to Consider When Drafting a Film Budget

Here are a few ground work to do before drafting :

What sort of film are you producing?

The nature of the film itself can help drastically with planning the different phases of production. For instance, documentaries are much less likely to require heavy VFX work than feature films, which can entail months of time spent on post-production! As a result, decide what type of film it is, then budget accordingly.

Sticking to the script

When making a film, the script is akin to the Bible! Every move on-set, as well as off-set, should abide by the script, including the budget! Moreover, it is an essential tool in allowing you to plan your budget – Many big-budget studios, for instance, focus on getting 1 page of the script done in one day of shooting and plan as such. As a result, they can get a solid estimate of how much time each part of the film should take, allowing them to plan and stay on schedule throughout.

Understanding the Phases of Production

Understanding each phase of production is integral to developing the budget. This is because costs can be estimated and optimized, depending on the phase of production. For example, pre-production typically deals with sorting outcast and crew wages, i.e., above-the-line wages, whereas production and post-production typically entail a high amount of expenditure on below-the-line wages. As a result, it is imperative to know what will cost you, as well as when it will cost you.

To help you out, we’ve outlined the primary costs that come with each respective phase of production:

How do I Draft a Complete Film Budget?

Well, it’s quite simple – you first complete the scheduling process, then gauge how much each day is likely to cost using several different factors – Typically, large studios have templates on hand that give budgeters ample information as to how much below the line costs are going to be, as well as post-production costs. As for above-the-line costs, these can vary drastically – If you’re set on employing A-list actors, directors, and writers, this section will probably run into the millions. If not, it may be much lower. In any case, the first step of drafting the film budget is to prepare the shooting schedule.

Then, each phase should be listed, with the relevant expenses under them. For example, the following templates will show you how to list the expenses in a film budget sheet.

As you can see, the budgeting process really involves listing down all of the potential expenses the production is likely to incur. Then, using historical data, market research, and input from third parties, an approximated figure of how much below the line costs will be are assigned categorically. This applies to all three phases of production. Additionally, Above the line costs are pre-determined before shooting begins and so can be listed at the very top, as they generally tend to be the most financially-demanding part of filming a movie!

Below are some free templates for you: 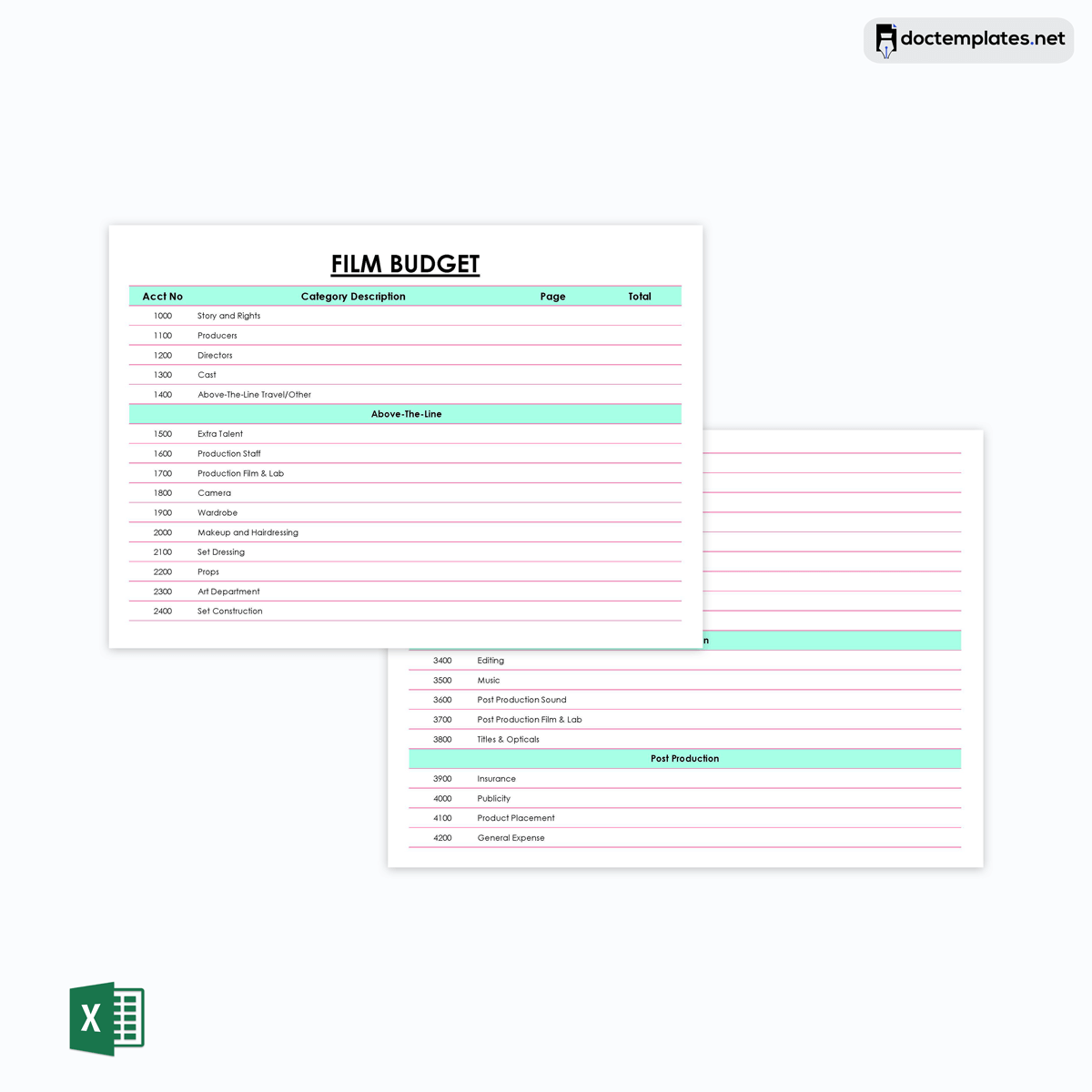 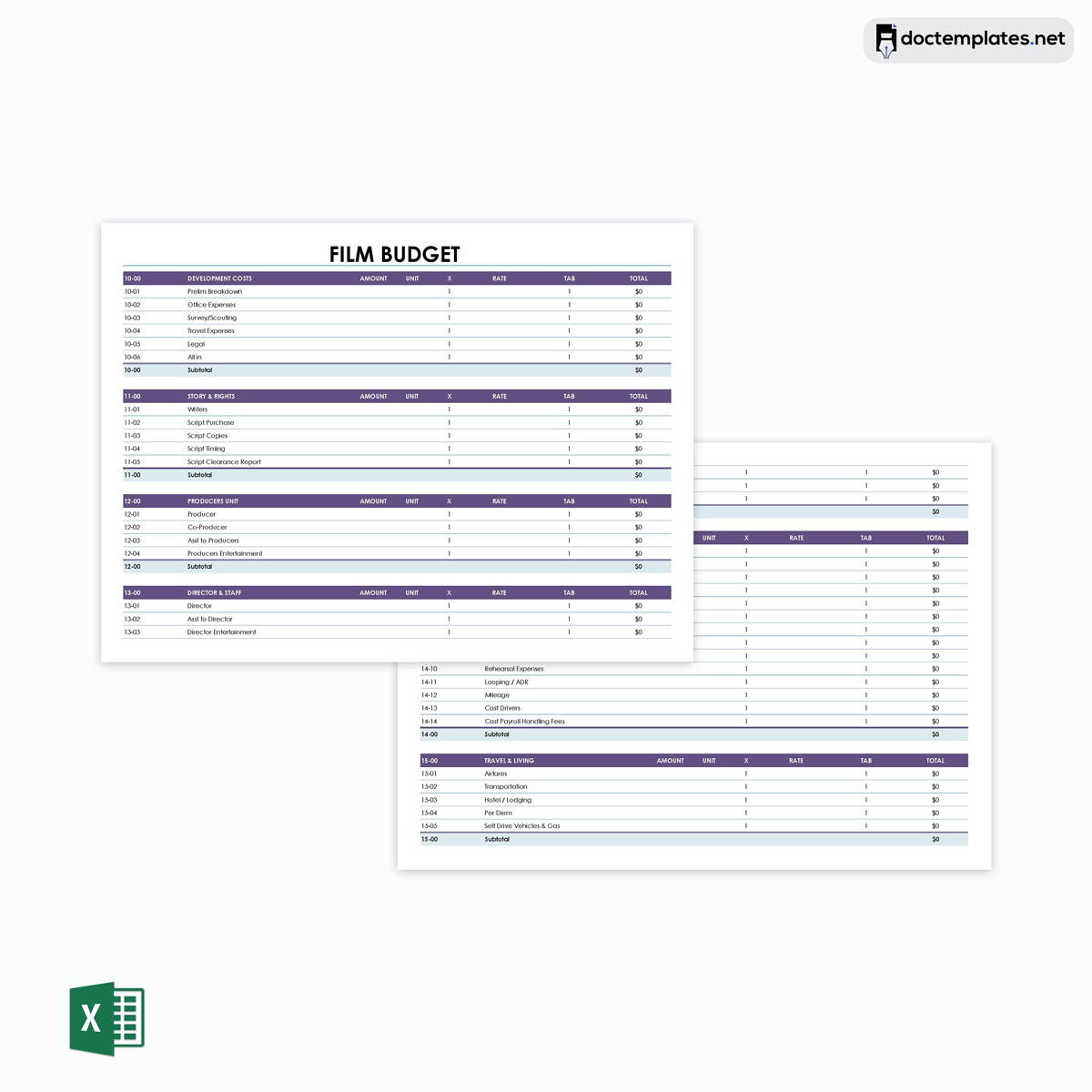 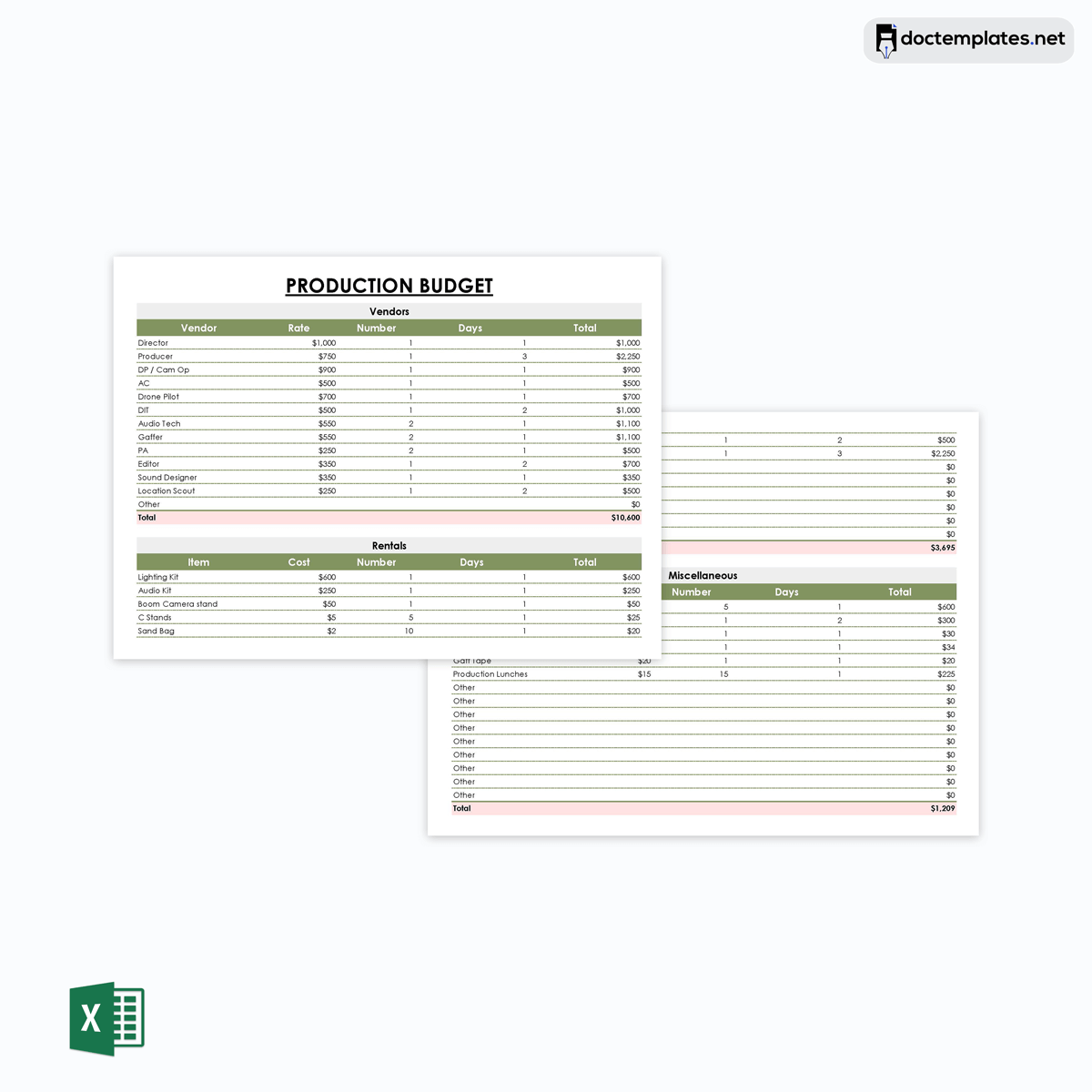 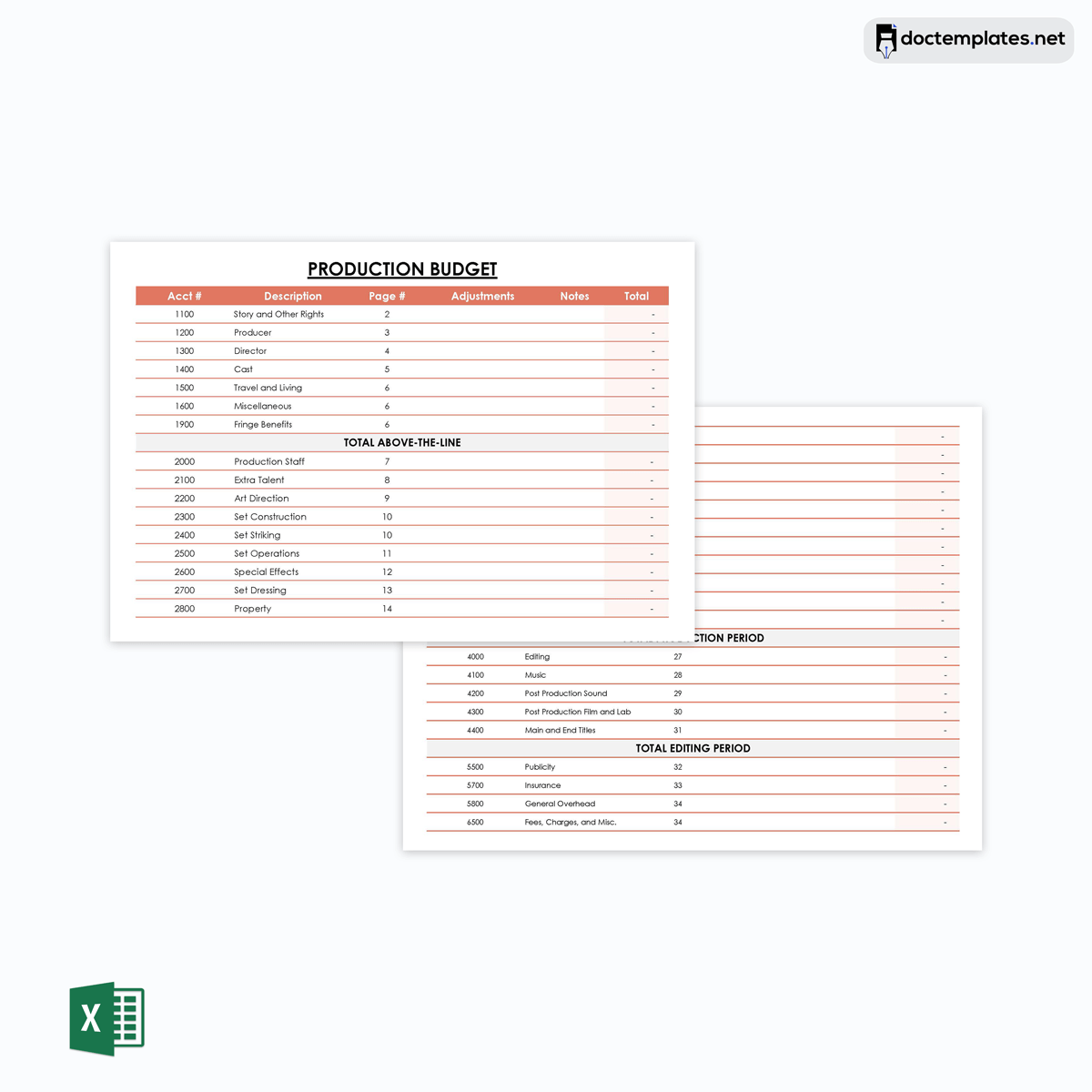 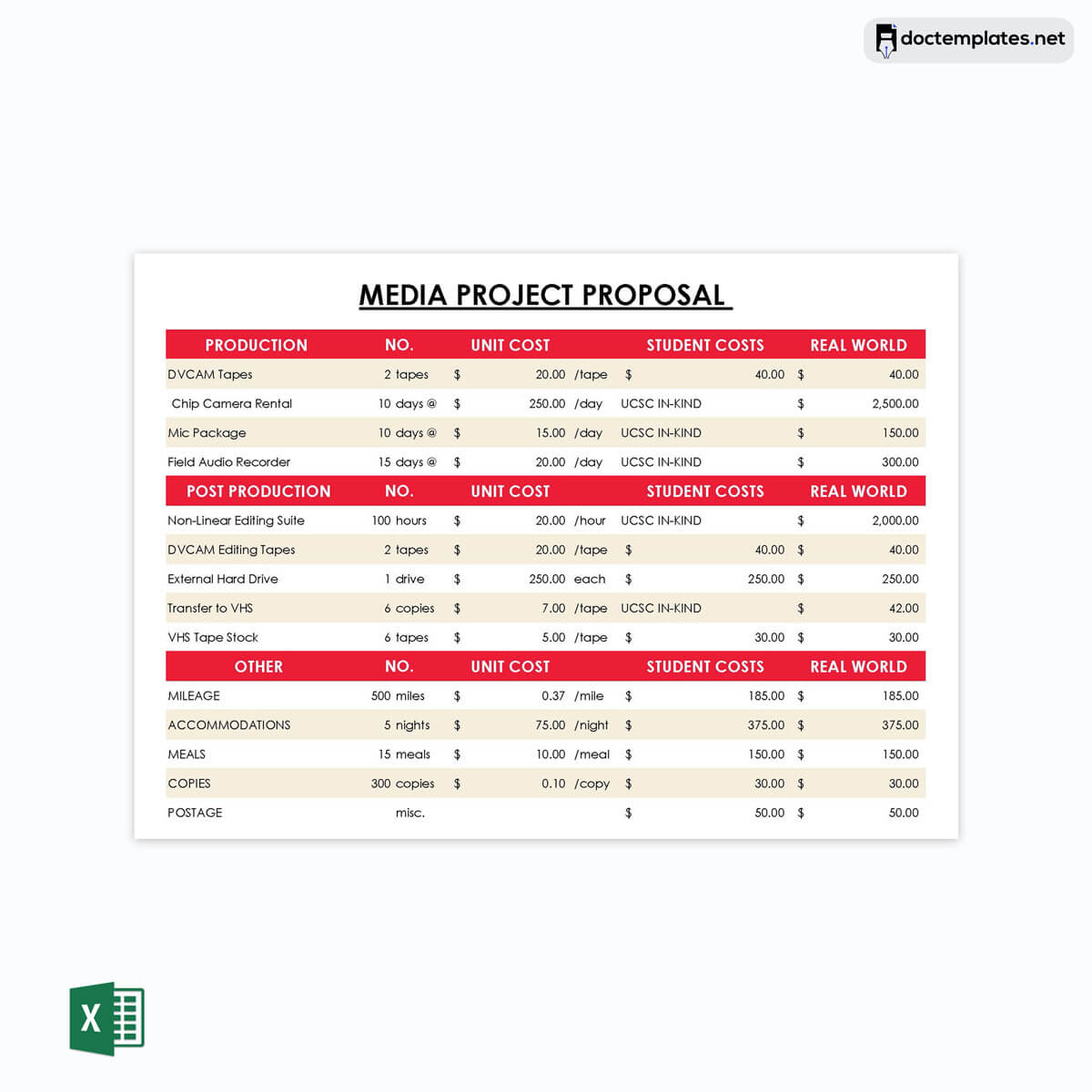 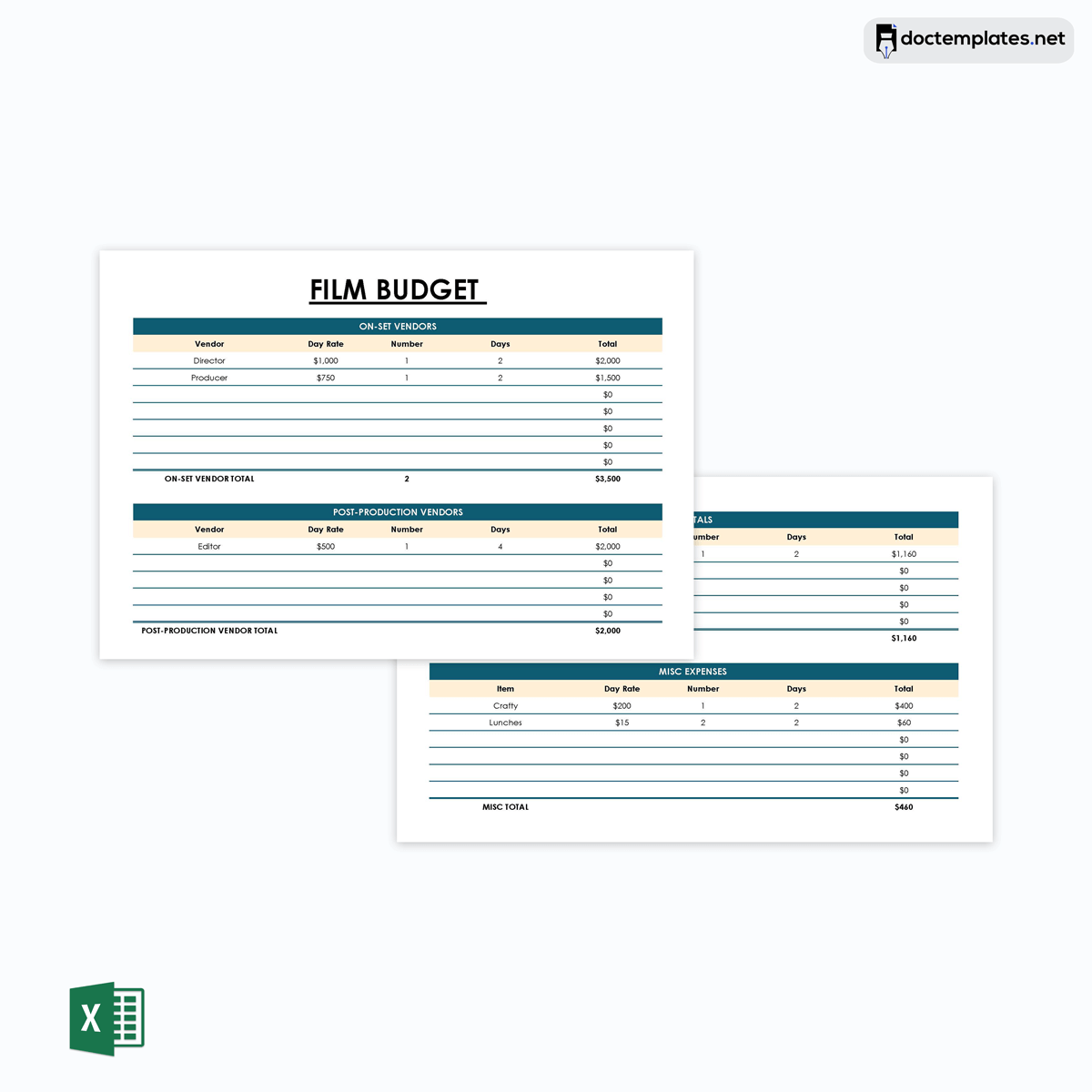 Film budget template is an essential part of filmmaking as it helps to organize all the costs involved in movie making effectively. The more organized you are when making your film, the better prepared you will be to overcome any obstacles that might come up during production. By creating a film budget template, you are taking control of the whole filmmaking process and ensuring that every detail is taken care of in an organized and efficient manner. By using a well-designed film budget template, you can easily track all the costs involved in making your movie, better predict how much money you will need to make the film, and track the progress of your project effectively.

How to Create an Expense Budget (15 Free Templates for Excel)