A debt release letter is a document created by a creditor after a debt has been cleared to inform the debtor, and any other third party involved that there is no longer any financial obligation between the creditor and the debtor.

This document outlines the name of the debtor and creditor, the date of the loan agreement or promissory note, the total amount paid by the debtor, and a statement acknowledging that the debt has indeed been concluded.

The debt release letter asks the creditor to release the collateral that he holds in lien to the debtor. This receipt also creates a written record of release in court if any form of dispute ensues between the stakeholders.

How to Write a Debt Release Letter

When you are looking to draft a debt release letter, there are key components that you must in it to make it effective;

The body of the letter

After supplying that vital information, you can type a statement acknowledging that the final payment has been made and that a debt release has been granted.

Conclusion of the letter with the creditor’s signature

Once you have included all the relevant information on your promissory note satisfaction, write an appropriate closing tag followed by your name and signature.

The Promissory Note Satisfaction can be used by both the lender and creditor to show that all their debt has been paid in full. This is because the document releases the debtor from any financial obligation arising from a loan transaction to which the document relates.

Once the document is completed, at least two copies of the document should be printed and signed by the creditor. The creditor should then deliver the signed copy of the debt release letter to the debtor, who should keep it for documentation and record-keeping purposes.

To Whom This May Concern,

I have attached my last and final payment of $789 for the account of Cynthia Young, Account Number 307865001234. In line with this, any statements made to credit collection agencies or any other Credit Reporting Bureaus should be informed that this debt has fully been settled. Further, your collection agency shall refrain from contacting me and making claims concerning this debt.

Because I have made the final payment for this debt, I don’t expect to hear from you except to affirm that, indeed, this account has been paid in full. Besides acknowledging debt release, any communication shall be considered harassment, which I will report to the State Attorney General’s Office.

Kindly confirm this debt release and thereafter delete information on this account from your records.

Debt release letters are important as it releases the debtor from any financial responsibilities to the creditor and can be used as proof in a court of law. As such, you must take your time to craft one and make sure that you have included all the key information. To help you out, download our free and premium templates and personalize them to suit your specifications. Download now and get started! 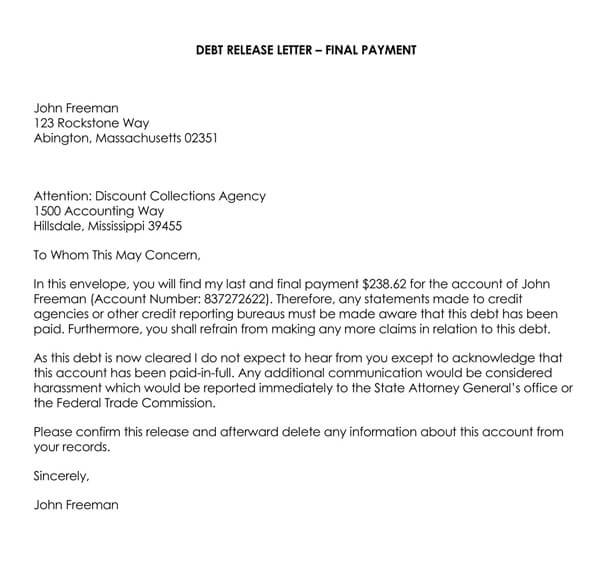 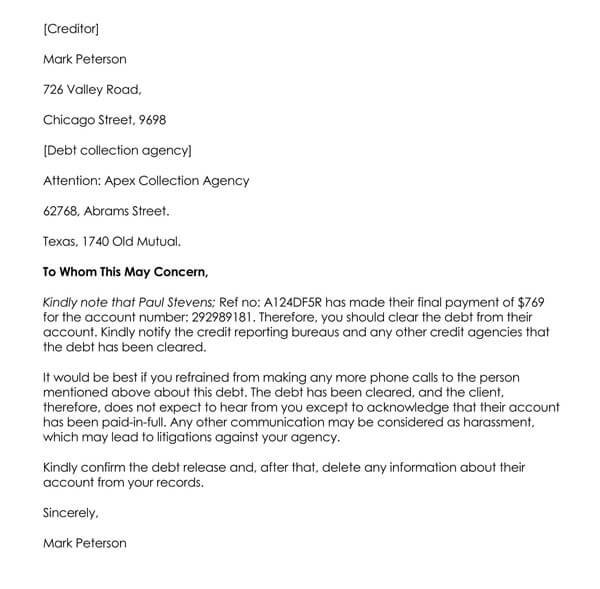 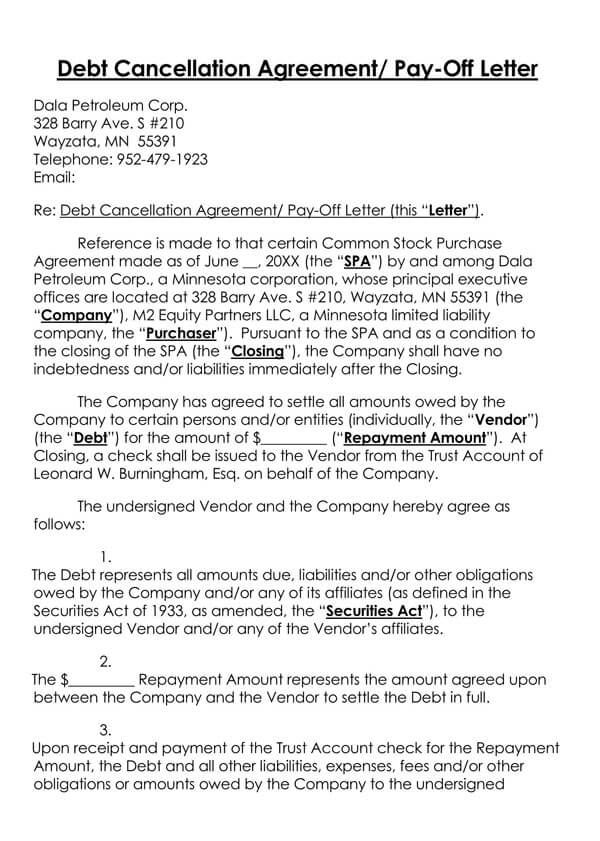 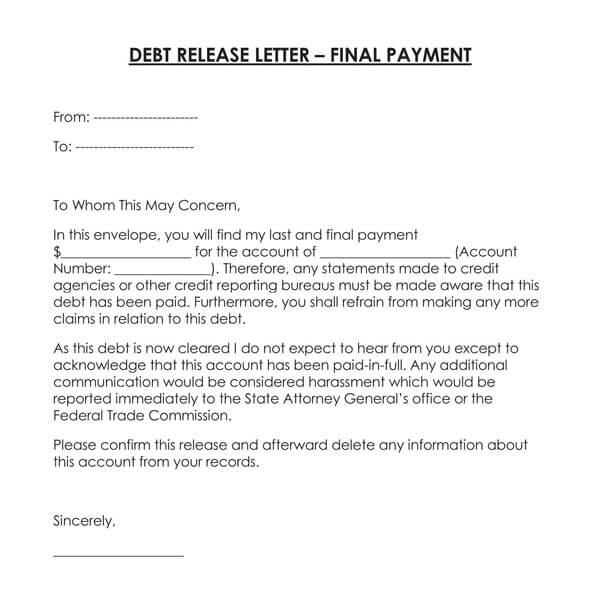 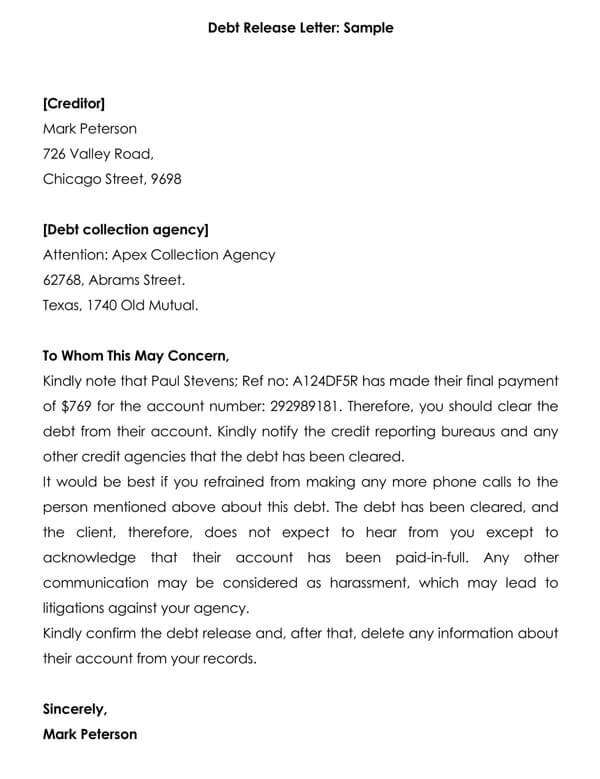 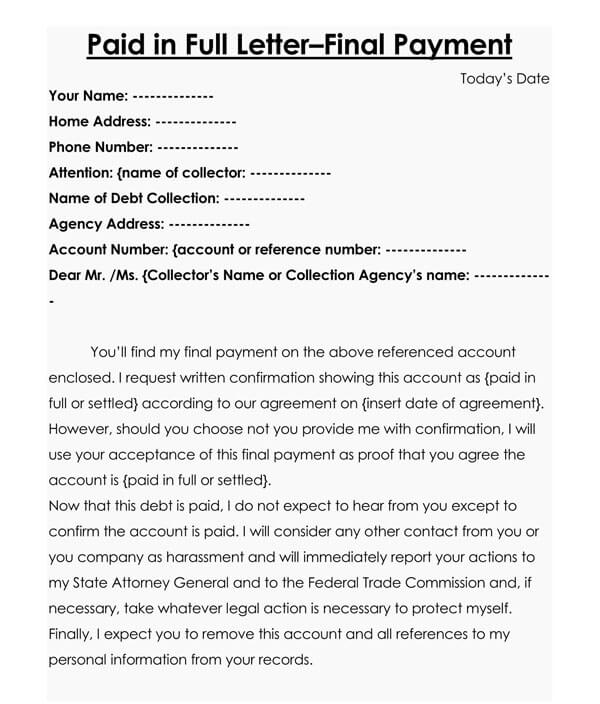 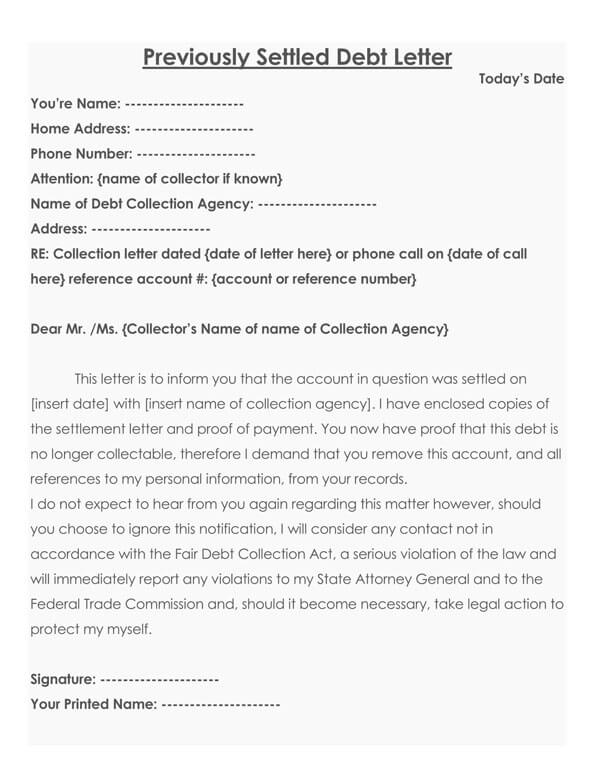 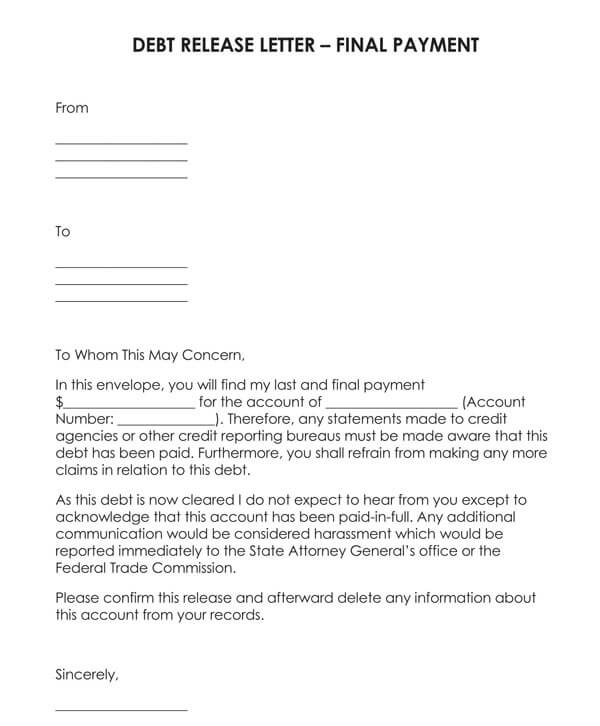 What is the Applicable Law for Promissory notes?

A promissory note is a valuable legal tool that a creditor or debtor can use to legally bind an individual to an agreement. A well-executed promissory note has the full effect of law behind it, and it is legally binding to all the stakeholders. If, for example, the promissory note is for a monetary loan, the lender has the legal authority to seek restitution through a court system and secure a judgment against the borrower. The Bill of Exchange Act regulates promissory notes.

Do both parties need to sign a debt release?

Usually, the lender is the one who is supposed to sign at least two copies of the debt release letter and supply a signed copy to the borrower. However, if the borrower decides to sign the document, there is no harm in it.

A debt release letter is a creditor’s receipt to inform the borrower that all their debts have been paid in full. This document is precious, especially to a debtor, because it is a written record proving that the debtor is free from the debt, should you need to prove the same to a credit reporting agency.