Referral Cover Letter Examples [How to Mention a Referral]

A referral cover letter mentions the connection you have with the hiring manager by mentioning an individual referring you for the opportunity.

When writing a referral cover letter, you should consider referees who contact the company before dropping names in the letter. The referee’s name should be mentioned in the opening or introductory part of the letter to catch the eye of the employer since the recruitment process deals with many candidates and employers aim to shortlist candidates based on details that seem to stand out in their cover letters.

Purpose of a Referral Cover Letter

A referral cover letter is essential as it gives the applicant a better chance of getting selected, as many companies rely on referrals to acquire new employees. The hiring manager gives priority to all individuals referred for a position before considering other methods of employee acquisition because it helps in selecting an individual who best fits the role available following the referee’s details.

Mentioning a prominent person as a referee or someone with connections with the hiring organization is like having an employment reference that boosts your chances of getting hired. The primary purpose of a referral cover letter is to create interest for the hiring authority as the manager reads your application since hiring based on referrals has proven to be an assured way of getting reliable employees.

Who to Select as a Referee

Different people can be referrals in a cover letter. Still, most importantly, a referee should have relations with the hiring organization or be from a prominent organization to increase the chances of being considered for the job. You can scan your LinkedIn connections to see if you know anyone working at the organization you aim to apply to and request them to refer you as an applicant.

A referee can be either a friend, former colleague or even a former boss who may have some associations with the hiring organization or manager.

Mentioning a Referee in a Referral Cover Letter

A referee should be mentioned in the referral cover letter by stating the name and the relationship with the applicant.

Below are details that should be included when mentioning a referral in a cover letter:

A referral cover letter should be written formally as its purpose is professional and hence should start with a salutation or greeting, which entails mentioning the hiring managers’ name. Greetings show respect and professionalism, which are some of the qualities expected in any organization.

Best impression in the first paragraph

There are various ways you can mention the person referring you for a job opportunity in your referral cover letter, and this should be indicated in the first paragraph of the letter or email. You should ensure that the following details should be put into consideration:

Your relation to him/her

Why you are being recommended

The introductory part should mention why a referee has referred you by stating your relationship with him/ her. For example, “I have been recommended this job opportunity by Mr. Albert, who works for your organization, and he requested that I contact you directly. He was a former colleague at Parkland’s organization where we worked under the same department of operations.”

Showing interest in the job is a significant aspect that should be portrayed in the first paragraph of the referral cover letter. It should focus on your strengths and capabilities in line with the organization’s operations, which will help in the growth and development of the company. This creates interest in the hiring manager and allows consideration for the position. For example, “I have proficient skills in bookkeeping and team management, which I have used previously to enhance the accomplishment of tasks and goals in my former organization”.

Conclude the letter by saying thank you to the operating manager for their consideration for the job opportunity. This shows the firm belief the applicant has and their eagerness to work for the organization.

A signature put at the end of the letter shows professionalism and is also required for a formal letter.

Below are a referral cover letter template and a sample for your ease;

Dear (name of the hiring manager)

My former colleague (name) referred me to this position and advised me to contact you directly for the application. We have worked together for a period of (give specific time frame) at the (name of the organization). During that period, I acquired skills such as (mention specific skills concerning the position being applied for)

Kindly review my resume and I believe I am an exceptional candidate for this position, and I will highly appreciate it if you allow me to work at your organization. Again, I highly appreciate your consideration.

My colleague Grace recommended I contact you directly for this position as I pose qualities that enhance an organization’s adequate performance through increased sales. Grace and I worked closely as sales agents at the FGH organization for three years.

My diverse experience as a sales consultant has increased my capability to research market gaps and challenges, which helps in an organization’s adequate performance, increases sales, and reduces losses.

Kindly review my resume, and I believe I will be an excellent candidate for this position. So again, I highly appreciate your consideration, and I am looking forward to your reply. 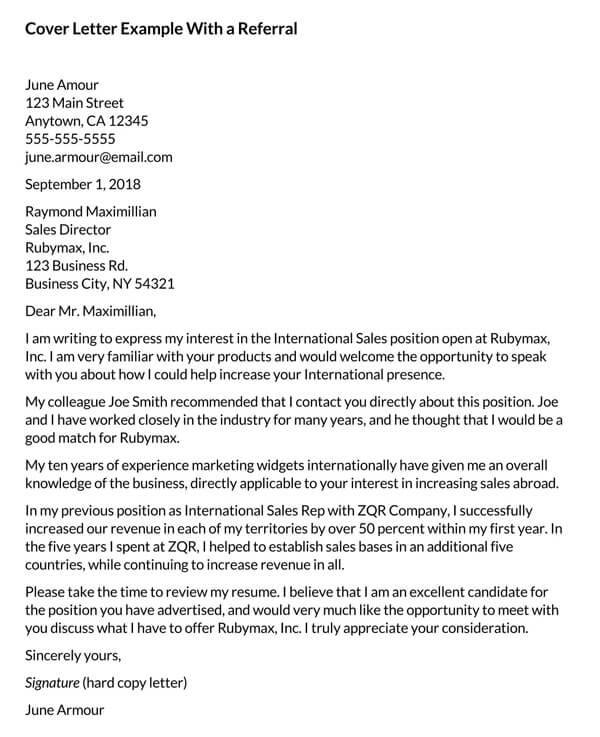 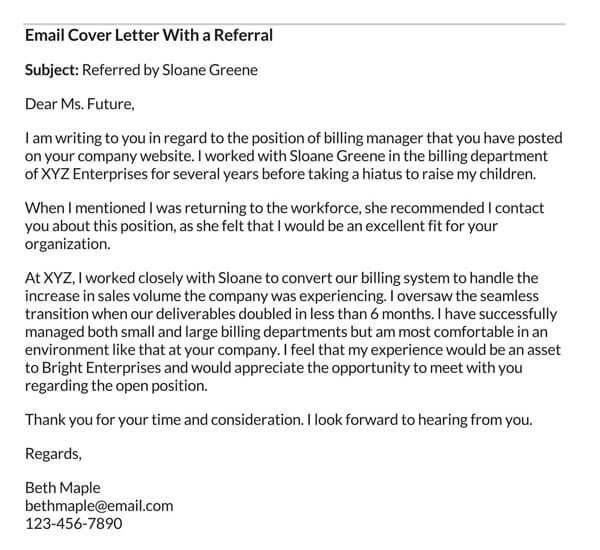 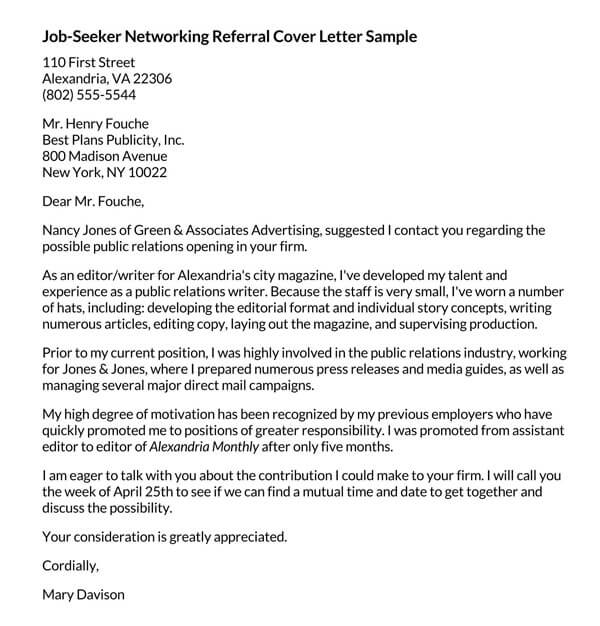 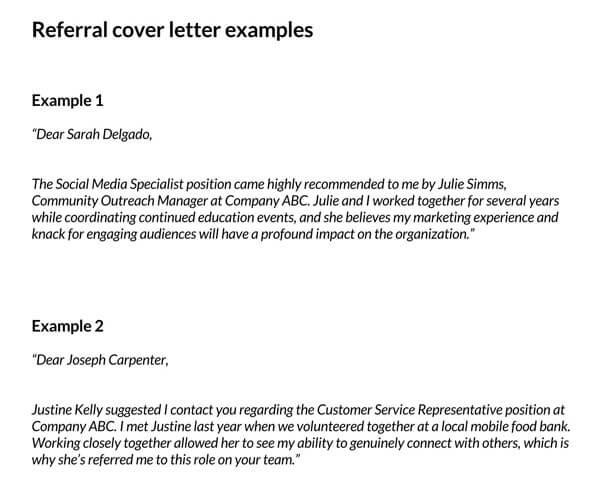 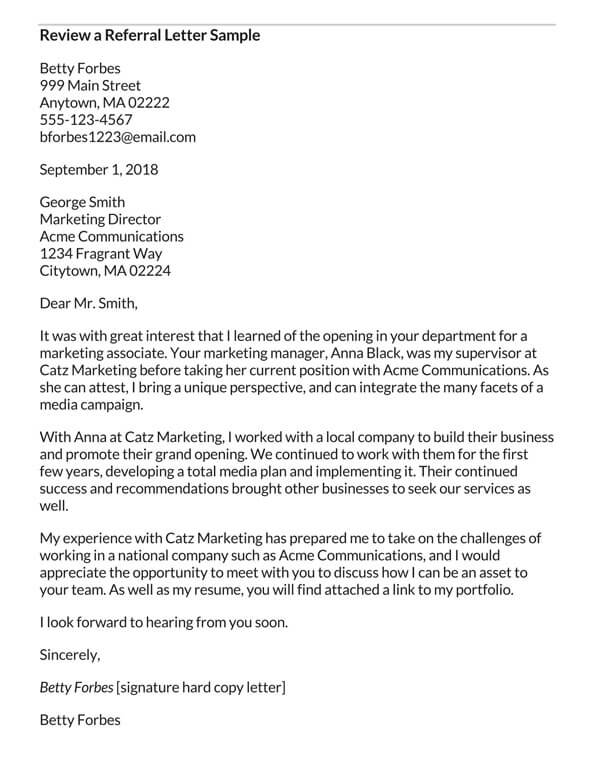 Tips to Write an Effective Letter

The following key aspects should be considered when writing a referral cover letter in order to do so efficiently:

The cover letter should precisely mention the applicant’s qualifications, which are in line with the open position. This helps the hiring manager to consider the application as it matches the requirements.

Talk about the referral

The referral should be mentioned in the first paragraph of the referral cover letter to spark an interest in the hiring manager. Once the manager identifies that the application has been based on a referral, there is a higher chance of securing the opportunity as the referee can provide more details in the case of a follow-up.

A referral cover letter should be straightforward since this helps the hiring manager easily understand the aim of the application letter and be able to identify the referee. Additionally, simplicity helps save time for the reader and gives them a better chance to create interest in the application.

Tailor what you can do for the company

The cover letter should give peculiar objectives the applicant perceives to implement in the organization through the open position to benefit the company. These should be positive aspects and should be supported by previous work experiences. It creates a good impression on the hiring manager and hence increases the chances of getting hired.

Proofreading the cover letter helps remove spelling errors that may affect the quality of the letter. Additionally, it helps eliminate grammatical errors, which might temper the initial meaning of the content and help ensure that the correct procedure has been followed.

Related: How to Say “Thank-You for Referral”

When writing a referral cover letter, the following key points should be put into consideration:

Referral Cover Letter Examples [How to Mention a Referral]

Including Salary Requirements in a Cover Letter | Samples