A Nanny contract is a legally binding document that enables parents or guardians of a child to hire and outline the duties and responsibilities of an individual called a nanny who acts as the child’s caretaker for an agreed-on amount of money and time.

The parent must be aware that there is a distinct difference between a nanny and a babysitter. A babysitter is merely a ‘stand-in’ for the parent for a period. He/she supervises the children on the parent’s behalf. The babysitter doesn’t have the same responsibilities as the nanny, which include housekeeping duties or any other outlined labor in the nanny contract. A nanny will often care for the children for years, whereas babysitters are more short-term.

Nannies are also more involved in children’s lives as opposed to babysitters who can simply be hired to watch a child for a short period. Babysitter services are often sought by parents who want to go on a date without the kids for at least a night or parents who have appointments that won’t allow them to care for their kids for a short time.

Essential Elements of a Nanny Contract

The nanny’s employment is dependent on the parent’s situation resulting in it either being a 1099 independent contract on a part or full-time basis. The 1099 independent nanny is considered a freelance worker or self-employed worker who does not receive a wage or salary but rather their pay is determined by the agreement made with the parent.

A 1099 independent contractor is paid by the hour depending on the nanny’s rate, overtime, responsibilities, and number of children cared for. Other factors that may affect the pay of a 1099 contractor nanny include the area of residency and cost of living.

The parent should ensure he/she discusses and includes bonuses in the nanny contract. Full-time nannies are often accorded one to two-week bonuses. The bonus amount varies depending on whether the parent resides in a major city where it is more or a rural area where it is less.

The parent should ensure that the nanny contract has all the benefits they are required to offer according to state and federal law or are willing to offer the nanny. A parent may offer benefits that include paid vacation, sick leave, and personal days. The nanny contract must specify how many days’ notice the nanny must provide the parent before taking a personal day or a vacation. The parent must also ensure that the nanny contract states the number of weeks a nanny can take for a paid vacation. The parent can also consider other benefits such as health insurance or auto insurance based on the advice he/she receives from an insurance agent

Use of household equipment

A non-disclosure agreement (NDA) legally prevents the nanny from disclosing the family’s private information even after termination of employment. The parents should consider including the NDA in their nanny contract to protect the family’s privacy. The NDA should include clauses that address photos, the child’s care details, the parent’s home, and any personal information the nanny might encounter during her employment.

The parent must ensure the nanny contract contains information on official termination grounds. For example, grounds for dismissal could include theft, continuously showing up late, drug and substance abuse, etc. The parent should also include an ‘at will -clause’ that allows the nanny to terminate the nanny contract for any reason. Suppose the contract’s term comes to an end, the parent can draft a new nanny contract after negotiations with the nanny.

How to Hire a Nanny

The parents can start by reaching out to family and friends who can take care of the child or at least recommend a nanny service.  Parents can also go online and find highly rated websites that offer nanny profiles and reviews. The use of websites is a preferred second option because the parent is able to identify a nanny whose profile would suit the family dynamics.

A parent should create a list of candidates that he /she feels would be a great fit for the family based on the credentials presented to him/her. The parent can then use this list to conduct face-to-face interviews. Face-to-face interviews can help the parent learn more about the nanny’s personality.

Next, a parent and nanny will have to negotiate on the salary. A nanny’s salary may be impacted by several factors such as experience, local cost of living, average pay, overtime, and state laws.

When writing the nanny contract, the parent and nanny can have an attorney present who can inform them of any state or federal laws they must consider that may affect agreements made on the contract. An attorney can help keep the process legal and agreeable for both parties.

Step 6 – Setting up Payment and Taxes

Finally, the parent and nanny should agree on how taxes will be paid. The parent can consult an attorney or IRS website for suggestions on how to manage tax payments. The parent should deduct all taxes from the nanny’s salary, and payment must be made to the IRS.

The parent should ensure the nanny fills the right IRS form depending on her employment status, which may categorize her as an employee or an independent contractor. The nanny should also select her preferred method of payment, such as Automatic Clearing House (ACH). The parent must then request the nanny to submit her payment and tax documents for proper record-keeping.

How to Write a Nanny Contract

State the names and addresses of both involved parties

The first part of the nanny contract written by a parent should be purely based on stating standard information of the parties involved in the agreement. This basic information includes the contract date, which is the date the agreement is made. The employer’s full name, mailing address, city, and state are also required to identify him/her as the hiring party. Indicating the name of the state will inform on which local laws the contract will be subjected to.

The nanny’s information should conclude the introductory part of the contract. The nanny will equally be required to write her name identifying her as employed in her capacity. The nanny’s mailing address, city, and state will provide an indication of the labor laws that she will be subjected to.

Identify each child and the nanny’s responsibilities

The second part of the nanny contract should identify the names and date of birth of each child the nanny has agreed to look after, for example:

The duties the nanny has agreed to undertake should also be included in this section. These responsibilities should be thoroughly described with the inclusion of all additional duties other than the general everyday care of the child, for example

Responsibilities: The Nanny Will Be Responsible for The Tutoring of The Child After School

The parent should create an article that is definitively addressing the level of service the nanny will be expected to provide. A live-in nanny benefit from paying no rent while residing with the family; however, her pay is much lower than that of a remote nanny. The parent can represent this information in two checkboxes in the nanny contract.

The nanny contract for a live-in nanny should contain information on the compensation the nanny should expect to make per hour, ensuring to factor in overtime earned per hour. A live-in nanny should also be informed on the pay frequency, which can be made monthly, weekly, bi-weekly or other periods which must be specified.

The nanny contract should also include the method of payment the parent will be expected to use, which can include check, cash, ACH (direct deposit), or other means which should be specified.

The parent must create an article within the contract that identifies the amenities and benefits available to the nanny. Amenities that include a car, computer, etc., should be indicated in this part of the contract. Suppose the parent bears any financial responsibility for the nanny’s transportation of the child. In that case, an indication in the contract must be made by stating that a vehicle will be provided, the nanny will be reimbursed for money spent, the nanny will not receive reimbursement for transport cost, or other stipulations should be specified.

Any benefits the parent intends on providing to the nanny, such as health insurance, public transport, parking, college tuition, and mobile phone, should be appropriately detailed in the nanny contract.

Other benefits that the parent may provide, such as paid or unpaid sick leave, vacation, holidays, or others, should be adequately and clearly recorded.

Once the nanny and parent have reviewed the nanny contract, they can sign it to validate it. The parent will hence be required to include a section in the contract where he/she and the nanny can sign, date, and print their names.

Note: While a hiring parent or guardian is free to draft the nanny contract, the use of an attorney is recommended. A nanny contract drafted by an attorney ensures that it considers state employment laws and the nanny’s rights. This will help protect the parent in the event of a future dispute or lawsuit by the nanny. 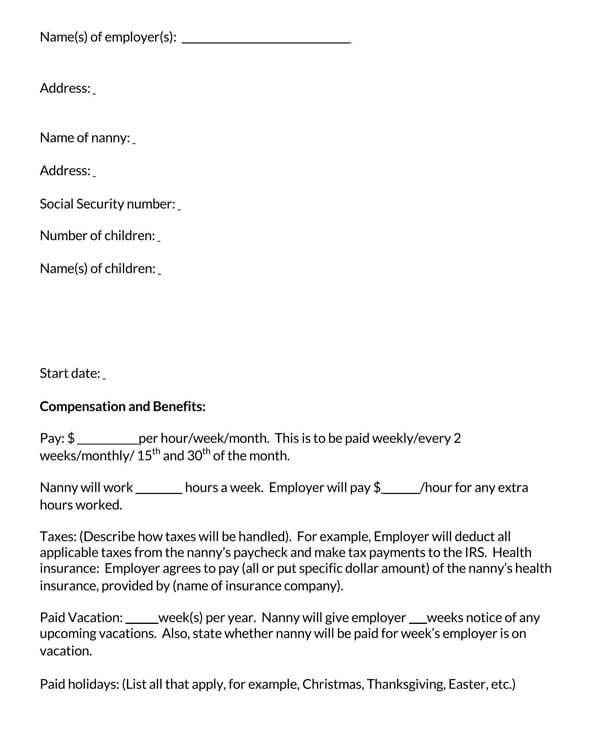 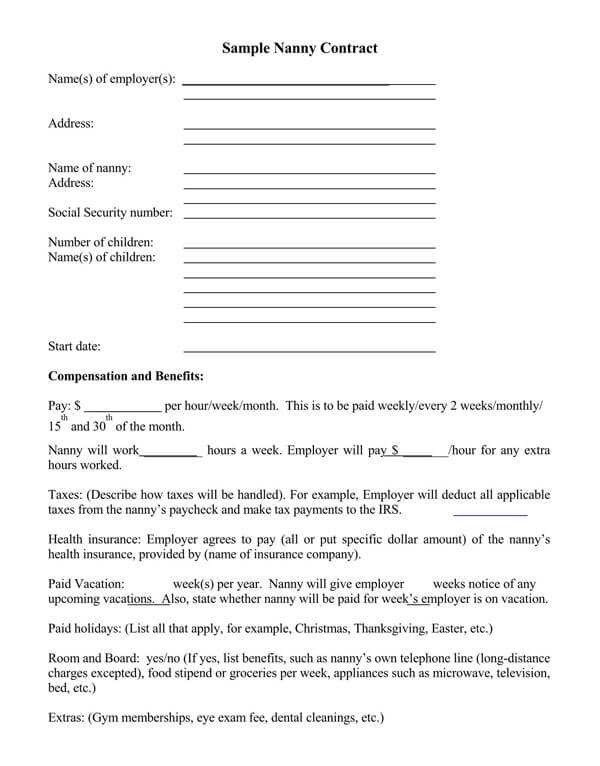 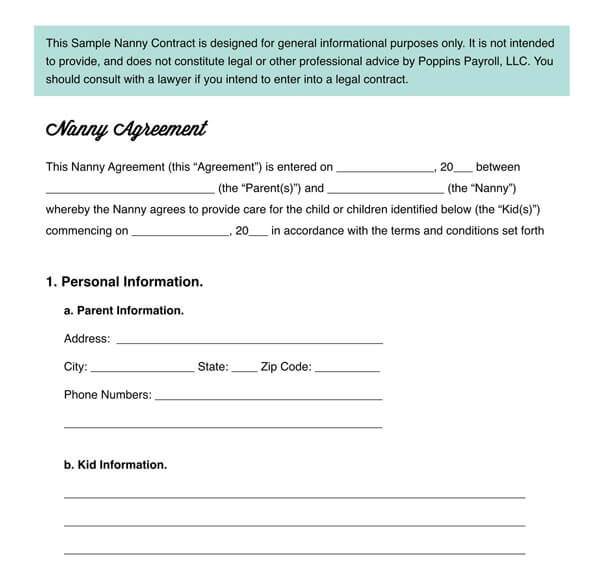