Free Lease Default Letter Templates | How to Write and Send

A lease default letter is a document served to a tenant or landlord to notify them that they are in breach of one or more clauses of the lease agreement.

If written by the landlord, the lease default letter’s purpose is to let the tenant know the particular problem and provide them with a time frame for remedying such problems. Should the tenant fail to remedy the problem within the provided time frame, action may be taken against them depending upon the default and the lease agreement’s provisions.

There are two main types of lease default letters that can be served to a tenant depending on the type of default.

Default due to late rent

This is the most common type of lease default letter and is served to tenants for non-payment of rent. Should the tenant fail to remedy the default within a specified period, the type of action taken against them would depend on the default duration and the lease agreement’s wording. It is recommended that landlords use the Notice to Quit for Non-payment if the tenant fails to pay their rent over a long time.

Default due to non-compliance

Another reason why a tenant may be served a lease default letter is due to Non-compliance, e.g., damages caused to the property, failure to comply with the parking requirements, taking part in activities prohibited in the lease agreement. Should the tenant fail to resolve the problem after being served the lease default letter due to non-compliance, the landlord may opt to serve them with a Notice to Quit for Non-Compliance instead.

It is common for landlords to find themselves in situations where they have to issue their tenant(s) with lease default letters for non-compliance or late rent payments. As such, it is important that they learn how to properly craft the letter professionally to avoid future litigations that may be both costly and time-consuming.

Here is how the lease default letter should be crafted:

Include the tenant’s full name as indicated on the lease agreement. It is important that the name included matches the exact name included in the lease agreement, as a small error in the name may mean someone else entirely. For example, if the tenant’s name is Peter Michaels, ensure that the name is written in full and not shortened to Peet Michael as the tenant may dismiss the letter as having received it by mistake.

Identify the default lease by date

There are various ways in which the tenant may default on their lease agreement, including:

The tenant must be informed of their specific default to help them remedy such defaults or plead their case on time. Explain in detail and if need be, quote the specific clause that they have defaulted on from the lease agreement to help them understand why they are receiving the default notice.

Document the amount of notice being afforded

The lease default letter should notify the tenant of the exact number of days afforded to them to remedy their defaults. The amount of notice should be calculated from the date the notice is issued. However, one needs to check with their state and federal government laws to ensure that the notice period that they provide doesn’t go against the laws governing such notices.

For the tenant to take the default letter seriously and for it to hold up in court should the issue escalate, the landlord should provide their contact information, i.e., their print name, phone number, email, and signature. The letter should be signed and stamped to show that the landlord acknowledges the letter and should be hand-delivered to the tenant or sent via certified mail and the receipt to show that the tenant received the letter.

Things to Consider While Writing the Lease

There are things that the landlord must consider when sending the lease default letter to their tenants.

This letter is to notify you that in reference to the Lease Agreement that you signed on _ [date] that is attached to this Lease Default Letter and made a part hereof by reference, you have defaulted on the agreement.

Kindly be advised that as of [date] you are in default of your lease agreement due to the following:

If you fail to rectify the breach within __ [number] days of the date of this notice, further action will be taken per the lease agreement that you signed, which provides for termination of the Lease agreement and filing of any collection proceedings for damages.

This lease default letter is made under all applicable laws with the rights stipulated in the lease agreement reserved under this letter.

It has come to my attention that you have breached the lease agreement that we signed with you in the following ways:

You have failed to pay for the repairs as agreed

I give you 60 days to remedy the above defaults. Failure to comply, I will be left with no option but to demand that you vacate the premises. In the meantime, you will be required, as per the lease agreement, to pay a fine of $700.

Kindly be informed that I take our community and tenants’ welfare very seriously, and I will not hesitate to act swiftly on any issue likely to interfere with their comfort and welfare. 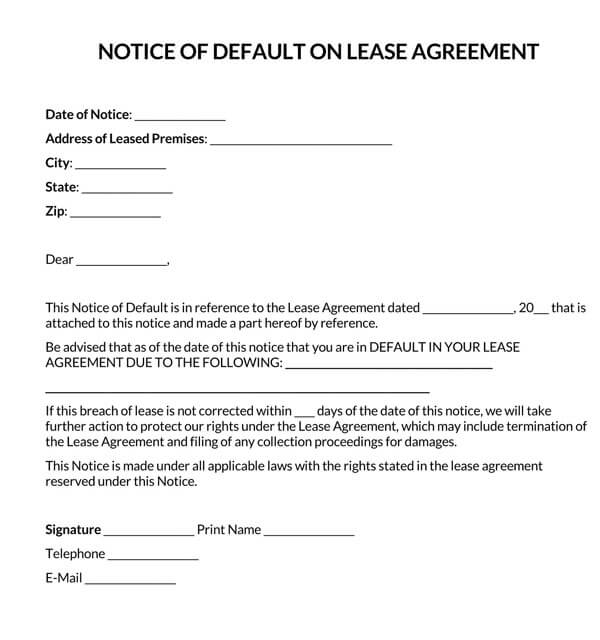 What does tenant default mean?

Tenant default means that the tenant has breached one or more clauses in their tenancy/lease agreement.

No, when doing background checks on prospective tenants, landlords only look at the publicly available information, including if the tenant has ever been bankrupt. Missed or late payments and any serious arrears or defaults don’t usually appear on the “public” versions that they can see. However, any negative payment history may be seen and may affect the chances of being approved for tenancy.

15 Free Notice to Quit / Eviction Notice Forms | How to Process

Free Lease Default Letter Templates | How to Write and Send

How to Serve a 30-Day Notice to Vacate (Free Templates)