There are many occupations that require that an employee is sober at all times. For example, it should go without saying that members of the military or law enforcement should stay alert and sober at all times to enable them to deal with threats when they arrive. For this reason, to ensure that employees in these occupations are up to the required standard at all times, a regular drug and alcohol test is carried out in these professions.

Also, some other jobs require an alcohol or drug test as part of a pre-employment hiring process before they can hire you to work for them.

Before such tests are carried out, consent is required from the individual, and this is done using the drug testing consent form.

What is Drug and Alcohol Test

What Is a Drug Testing Consent Form?

A drug testing consent form is a document that gives an employer the consent to test an employee for alcohol or drugs in their system. This document must be signed by the employee before the employer can carry out a drug and alcohol test, but if an employee refuses to give consent, it could lead to the termination of the employee’s job.

The same is applicable to a potential employee. If they refuse to give consent by refusing to sign the drug testing consent form, the prospective employer can, by law, reject their application.

Here are some of the situations which require drug testing consent form can be done:

Some professions like those in healthcare are required to stay sober at all times, and the employer can carry out random testing on some workers when there is suspicion of substance abuse by those workers. While the employee might be clean prior to working with you, you must ensure that they didn’t just get lucky.

A good way to do this is by conducting random drug tests from time to time. It will require the employer to have the drug testing consent form signed by all the employees. This not only helps to deter a drug or alcohol abuser, but it also brings about maximum productivity and employee health.

Pre-employment drug and alcohol testing may be required by some prospective employers from their potential employees before they can be hired. Refusal to give consent could lead to a potential employee losing the job opportunity.

You must ensure that the employee you’re looking to bring into your team has their head in the game and will be beneficial to your organization. Alcoholism and drug dependence decrease focus and a person’s inability to reason. Therefore a pre-employment test is very necessary as part of employment requirements.

This test, however, must go alongside random tests after employment to ensure that the employee isn’t an addict that got lucky the first time.

These tests are usually done annually or quarterly, depending on the company. These physical examinations usually involve a drug and alcohol test to confirm that employees are complying with the set rules prohibiting substance abuse.

These tests are common in industries when heavy machinery is used. A lot of accidents in these industries are caused by substance misuse, so many employers ensure they check their workers after an accident to verify that the accident was not caused by the effects of substance abuse.

Many workers get addicted to drugs after going through a severe treatment process, so employers use this kind of testing to encourage the worker to stay away from drugs.

These tests are valuable for checking for drugs and active components of alcohol in various body fluids, and you can classify these as follows:

Alcohol testing is a common practice in many companies as employees are not allowed to drink booze during work hours. In the transportation industry, regular alcohol tests are carried out.

How Often Can Testing be Done?

An employer can do testing on their employees at a set date, which should be known by the employees or on suspicion. If an employer has reason to believe that an employee is using drugs, they have legal grounds to test the employee.

It is easier to detect a drug problem when tests are random, and the employer does not inform the employees about an upcoming drug test. However, setting particular dates for drug testing can also be of benefit and may reveal residues of drugs or alcohol in the body fluids. There is no strict rule for the duration between drug tests for employees, but because this is a capital-intensive business/ organization strategy, you could use your discretion to avoid wastage.

Although employers would have loved to have blanket random drug tests that will eradicate the possibility of constant drug abuse in companies, it is unconstitutional to do so. Also, if a drug test comes out positive, most times, an employer is mandated to conduct the test again to see if it is a false positive. In all, remember to get consent from your employees before you carry out drug or alcohol tests. It will save you from unnecessary legal battles in the future. 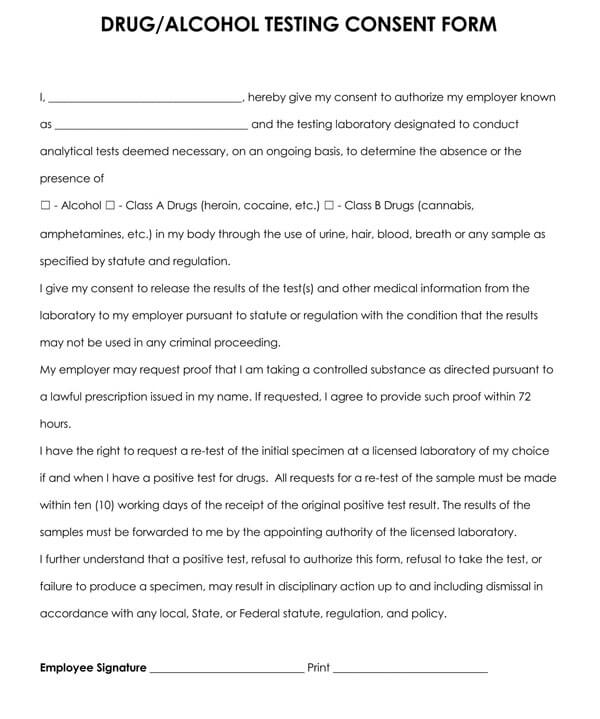 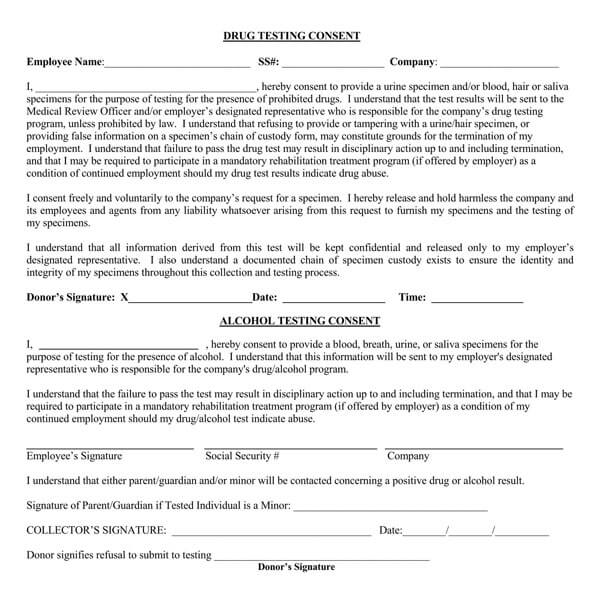 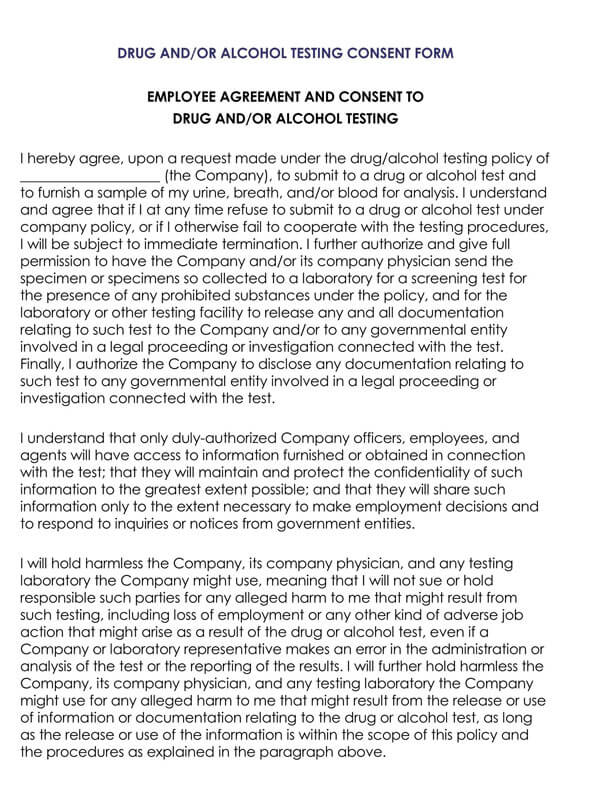 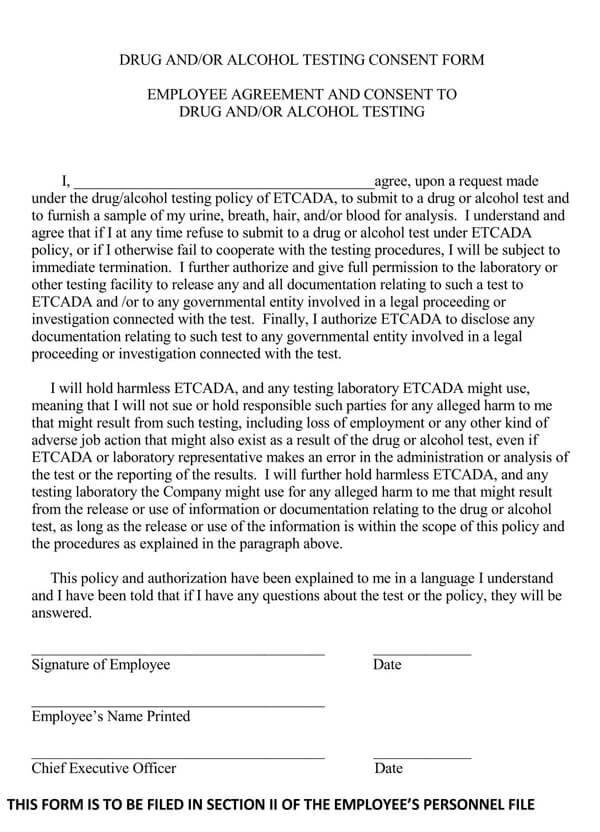 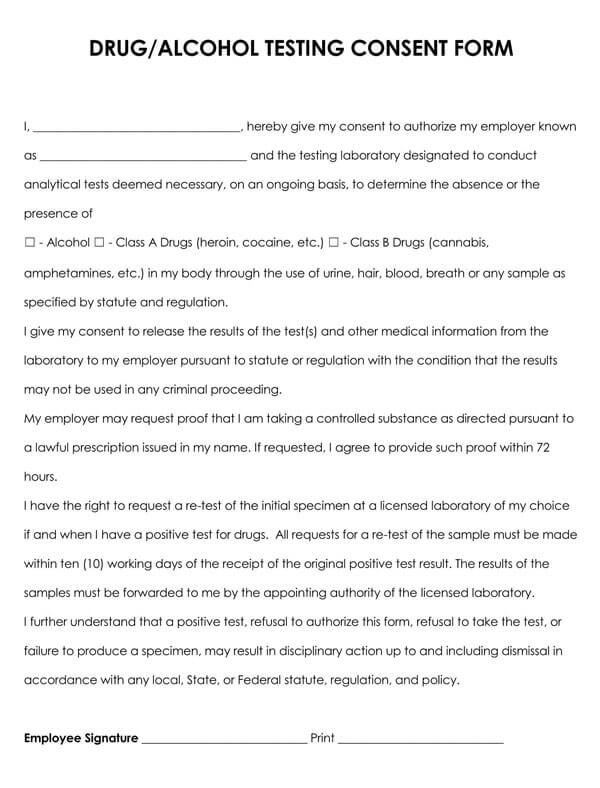 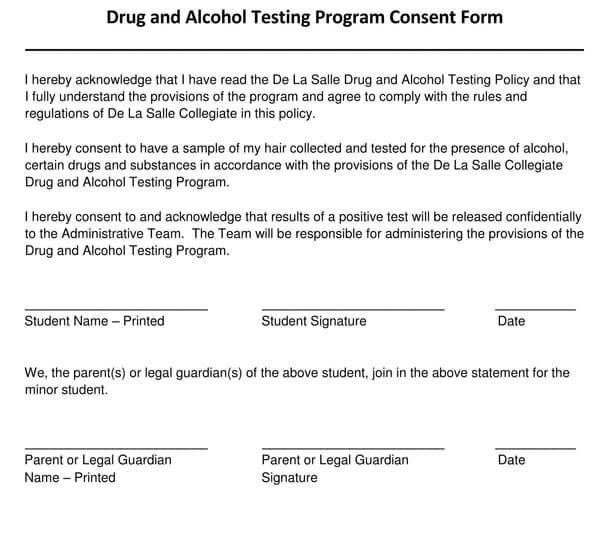 Drug/Alcohol Screening and the Law

They are as follows:

An applicant can be subject to a drug test if:

Can a doctor do a drug test without consent?

A doctor should not be able to do a drug test on a patient except the patient is underaged (where the parents can order the drug test done by signing the drug testing consent form) or incapacitated (and a drug test is urgent for treatment).

Can my OB-GYN drug test me without consent?

The same rules apply to all medical practitioners, except a state child welfare agency demands a pregnant woman gets tested for the sake of the baby.

Can a school drug test you without consent?

This depends. In special cases when the court rules in favor of the school, a drug test can be carried out.