Almost everyone encounters a release of liability, either in a personal or business setting. These legal forms are responsible for protection against lawsuits by addressing potential damage of property,  injuries, or various commercial rights. It is advisable to sign this form, especially for any person or firm that engages in activities that may rise to legal proceedings in court. A waiver of liability applies to damages or injuries incurred by any person in the normal course of the assigned activity. However, this document does not accept the release of liability caused by its acts of negligence.

What is a Release of Liability?

A car accident release of liability is an agreement between two parties willing to release a part of their legal obligation to another. A releasor is the party who agrees to let go of the potential claim in exchange for something, while the releasee is the person who is released from the claim. A liability release is used to claim damages that have already taken place, for example, after a  car accident. The release can be used to waive claims for any future injuries.

The waiver of liability form should be signed before taking part in activities such as sky diving, fitness lawsuit, or sky camping. The clause is brief and straight forward as it explains the specific rights you are giving up.

The Basics of Car Accident Release of Liability Form

The car accident release of liability form is also known as the Liability release form or the general waiver. A well-constructed release form will take into consideration the following factors:

How Does the Car Accident Release Form Work?

To start, you need to introduce the releasor and the releasee. The releasor is the victim of the damage, while the releasee is the one who caused the damage. Identify both parties appropriately, including their full names. For cases with more than two persons at fault,  include them in the agreement

Specify the total amount that the releasee has to pay

Outline all the injuries and damages caused; this will help give an estimate of the total amount needed to cover all the bills.

The whole document is considered unenforceable and invalid if the release form is not in compliance with its governing laws.  The governing law will be used to carry on any decision given by the court.

Consult with a personal injury attorney

It’s upon you to choose if you will need to consult an injury attorney. That depends on you, but some

states need you to notarize your release of liability. If you ail from such states, then no need for notarization. Although a notarized document is very important as it guarantees the validity of the agreement. 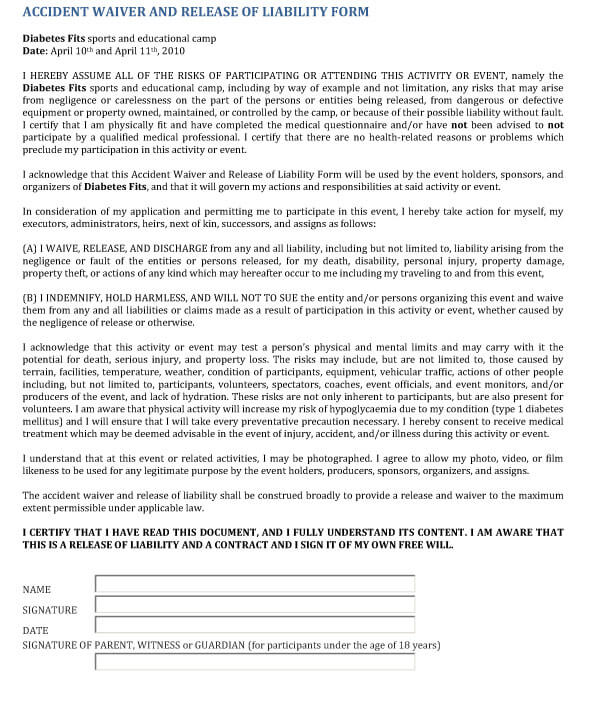 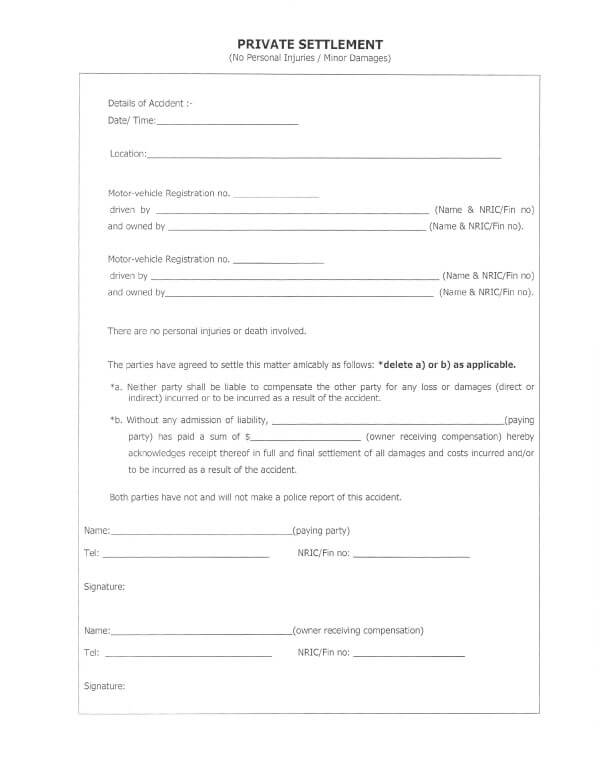 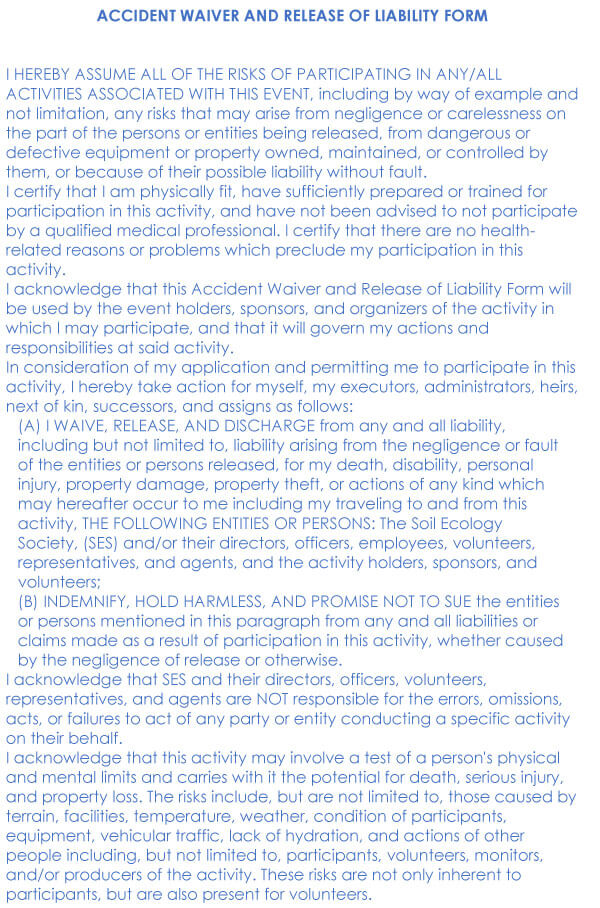 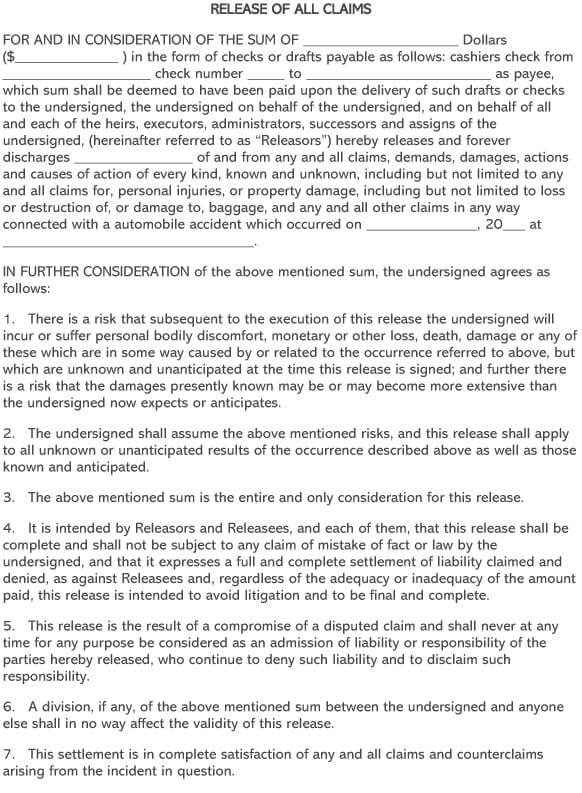 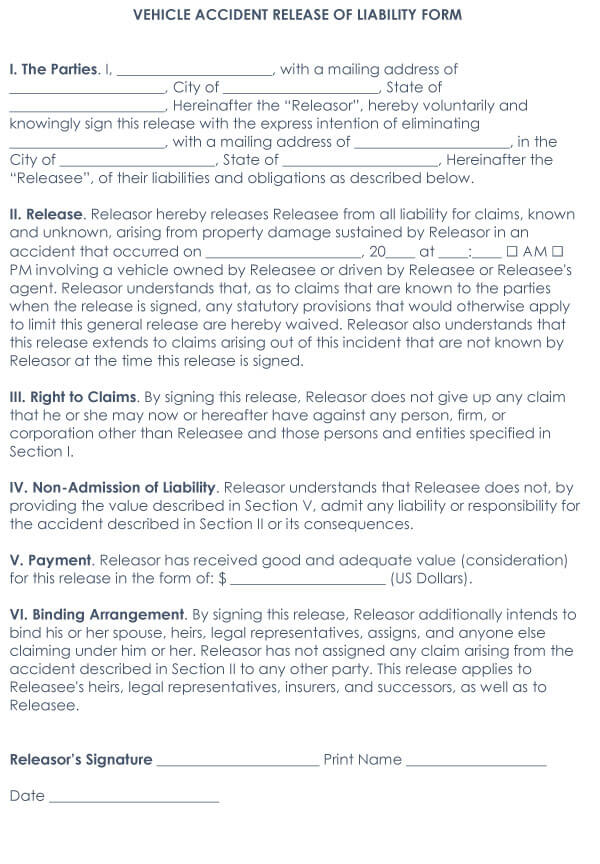 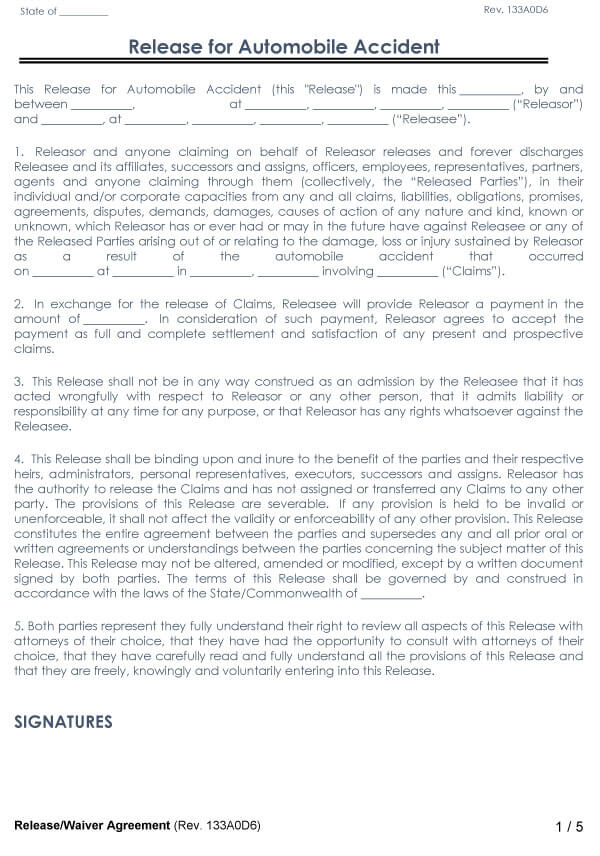 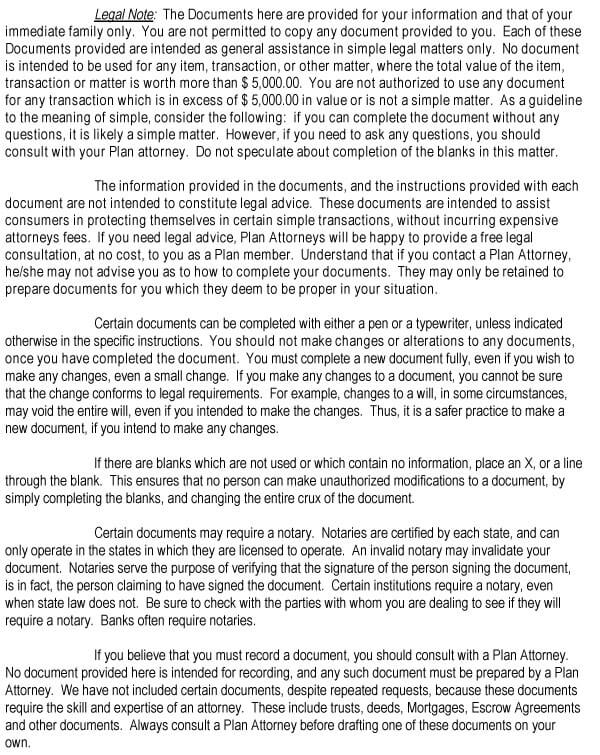 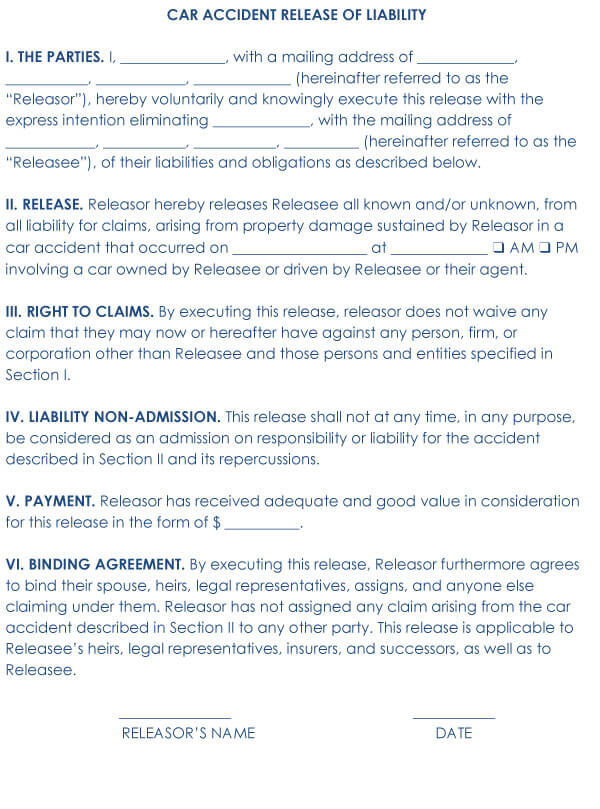 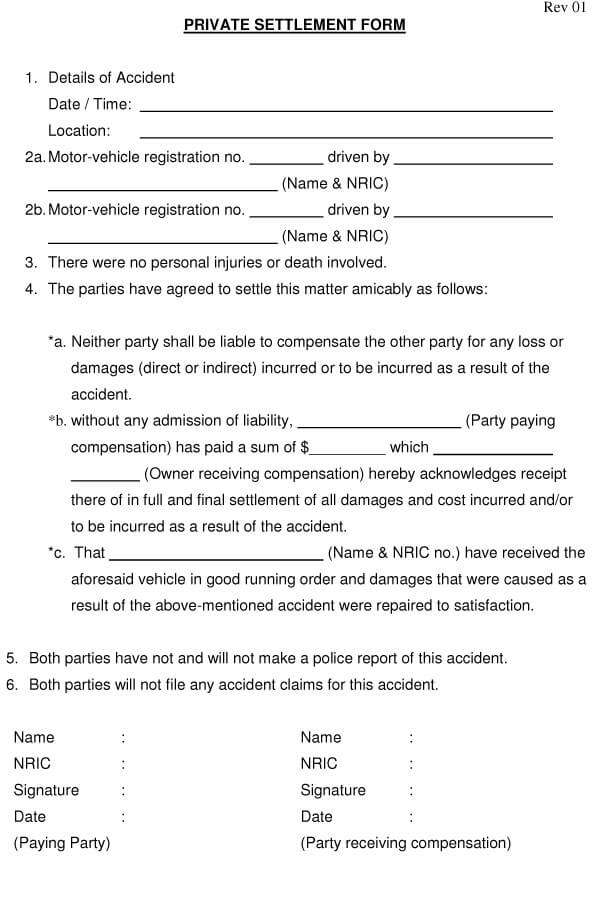 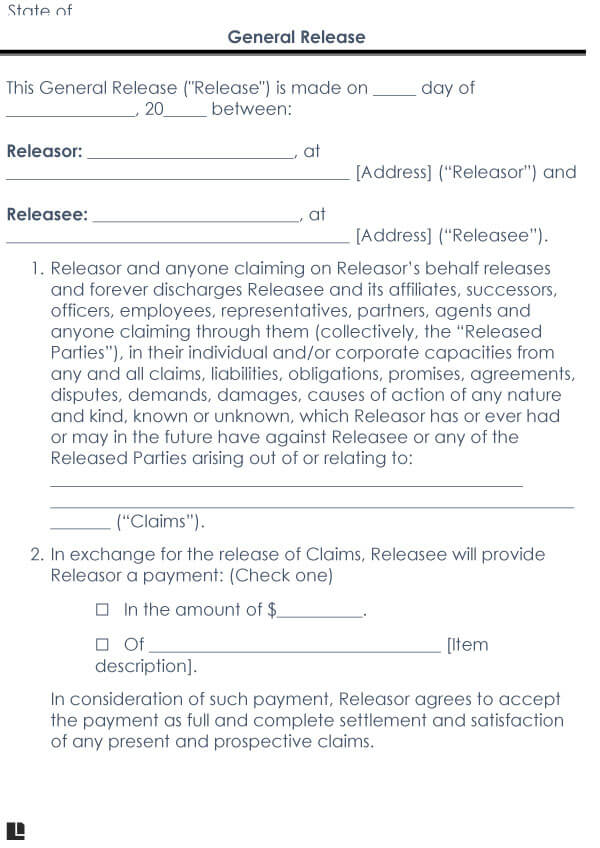 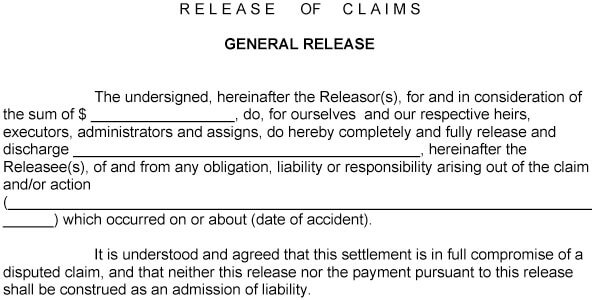 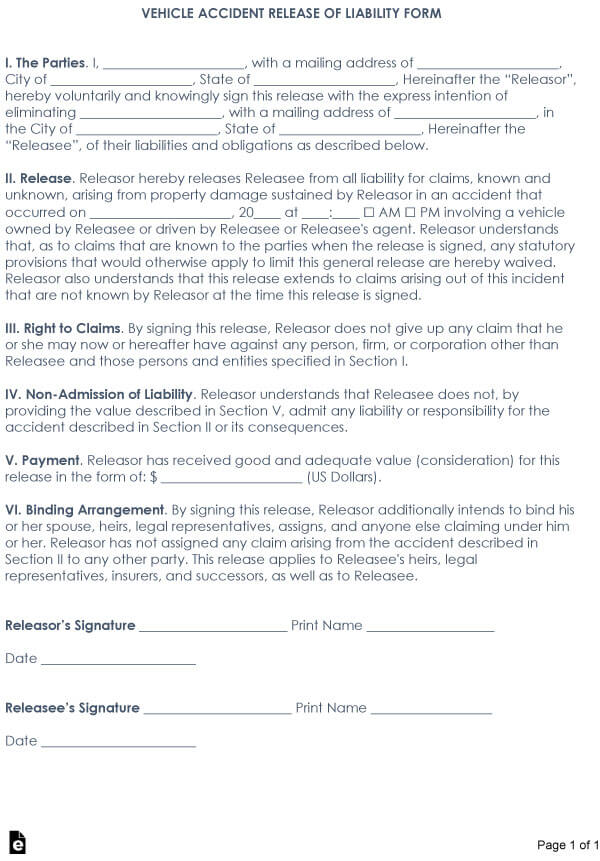 By signing the release of liability form, the releasor acknowledges the fact that he or she is aware of the claims and risks involved and still agrees not to sue the other party for either past or future damages.

Car accidents are part of life; we cannot run away from them since we experience them once in a while. When two drivers come together to settle the dispute, they either come to a mutual agreement or case filing. A car accident release of liability cuts down the burden by settling a dispute peacefully. Therefore, the other party will not be cleared of their responsibility, and in that case, you can waive your right to sue.

Should you notarize the car accident release of liability form?

There is no set rule on notarization, but you can choose to notarize for your own good. This depends on you. You know a notarized document will guarantee you the validity of an agreement.

What are the names of the parties involved?

The car accident release of liability form is made up of the releasor and the releasee. The releasor refers to the victim of the accident, while the releasee is the person who is at fault.

What are the steps taken before obtaining a car accident release of liability form?

Collect all the information about the accident.  You can involve the police to get images, get an accident report, and find out who is at fault.
Inform the releasee of all the damages caused.
Negotiate the settlement. Do a  thorough background check to prevent the releasor from getting involved in insurance fraud.
Let both parties sign the release form.

Do I have to inform my insurance agent about the accident?

Yes, inform them within the shortest time possible because if you fail to let them known, there is a chance that they can decline to cover your expenses.