A settlement agreement also referred to as a settlement NDA, is a legally binding contract between the employer and an employee, which settles claims that the Employee may have against their employer in return for a discretionary severance payment. If all parties involved in the Agreement fail to reach an agreement on the final terms, then the negotiation may be disallowed as evidence to support claims before a court or an employment tribunal.

When is a Settlement Agreement Used?

Settlement Agreements are normally used in redundancy situations or to bring an employee’s employment to an employment relationship, which, for whatsoever reason, is no longer working. It can also be used to settle workplace disputes and grievances.

Settlement agreements are particularly suitable when you are looking to avoid the uncertainty of going to court, employment tribunal, or when you simply don’t have the time and resources of going through a long formal grievance, disciplinary, capability, or redundancy procedure.

How are the Terms and Conditions Decided within a Settlement Agreement?

All settlement agreements must contain a clear breakdown of the payments which have been agreed upon by both parties and should also state whether the payment is to be made to the Employee tax-free.

Usually, payments of up to $30,0000 compensation can be paid without tax deductions if the payments are being made on an “Ex gratia basis” (i.e., it’s a payment that you have to decide to make rather than one you have been legally required to make) or as damages to reimburse for a breach of an agreement you made with the Employee. But, this can be a very tricky area, and it is always important that you seek professional advice before having to commit to making payments tax-free.

What Claims Should Be Waived?

Most legal claims regarding contractual and statutory rights can be waived as part of the agreed terms and conditions in a settlement agreement, including unfair dismissal, unlawful deduction of payment, discrimination of any kind, and entitlement to statutory redundancy pay.

However, not all claims can be settled in this manner, such as claims of personal injury, accrued pension entitlement, which have not been brought forth at the date of the Agreement and claims due to breach of the Settlement itself.

How Much Should be Paid in the Settlement Agreement?

There are no set limits of payment laid down in the law, and the amount of any settlement payment will often depend upon the specific circumstances of each case. The following factors may come in handy when considering how much to offer the Employee in a settlement claim:

You may also have to cover any benefits accrued up to the date of termination, any undertaken holiday allowance, any bonuses, outstanding holiday pay, notice or payment in place of notice, etc.

If the employee has been employed at your organization for two years or more and you are making them redundant, then they may also be entitled to a statutory redundancy payment. The amount they receive will usually depend on their age and the length of service as your Employee.

What Non-Financial Terms Should Be Included in a Settlement Agreement?

Often, it is the case then an agreed reference will be part of the settlement agreement, with a clause included stating that the Employee, when issuing reference for their Employee, will not under any circumstance deviate from the wording, which has been agreed upon as part of their deal.

Furthermore, it is common for the Agreement also to have a provision preventing the Employee from making any derogatory comments about their employer.

Other Confidentiality of Settlement Sample Clauses: 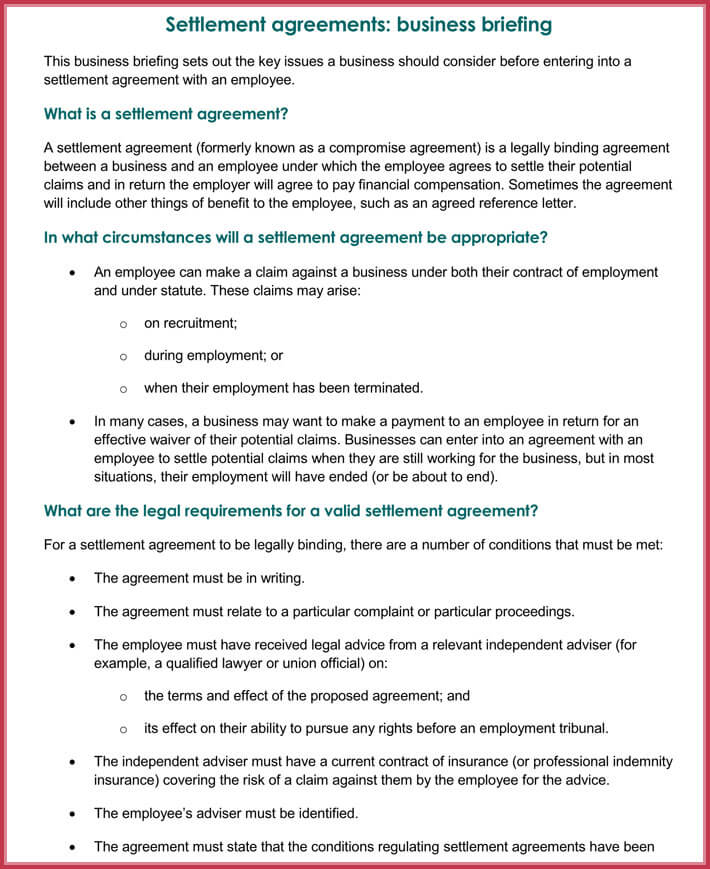 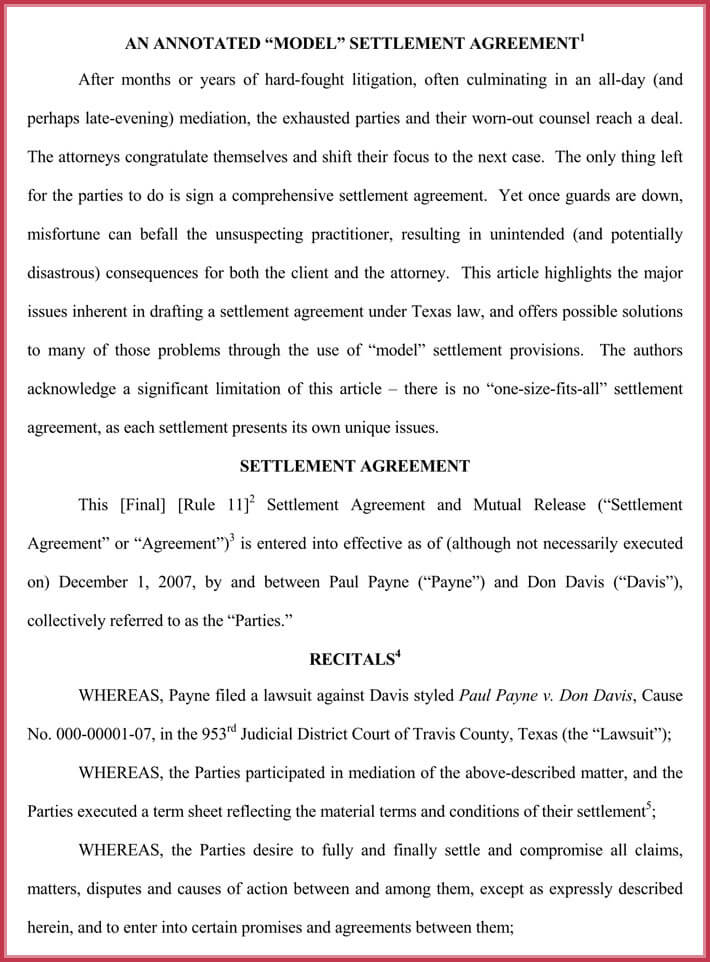 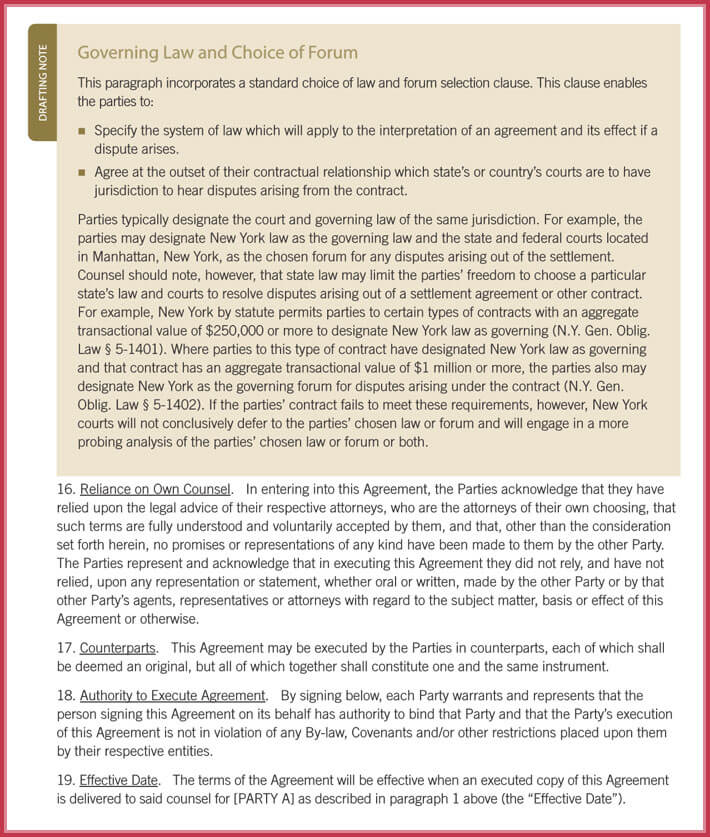 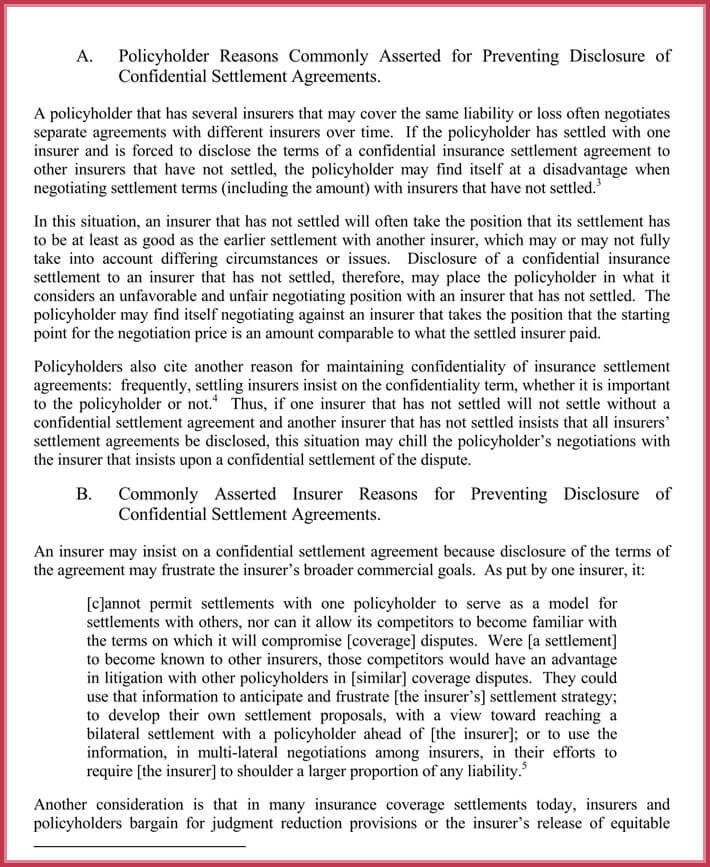 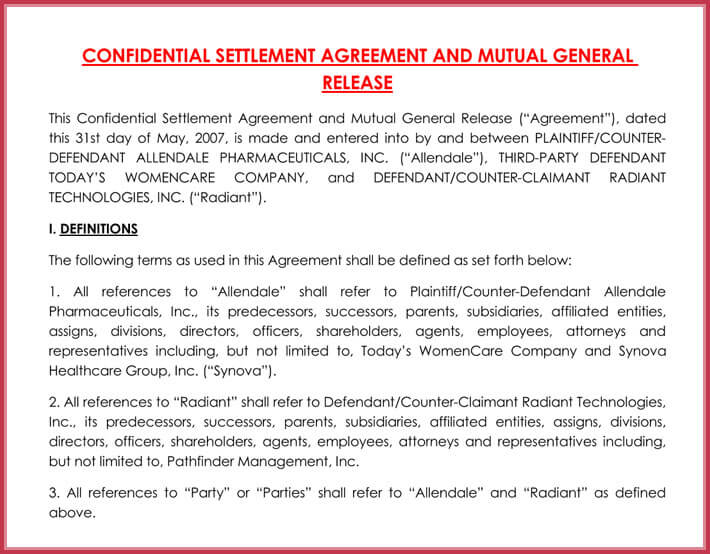 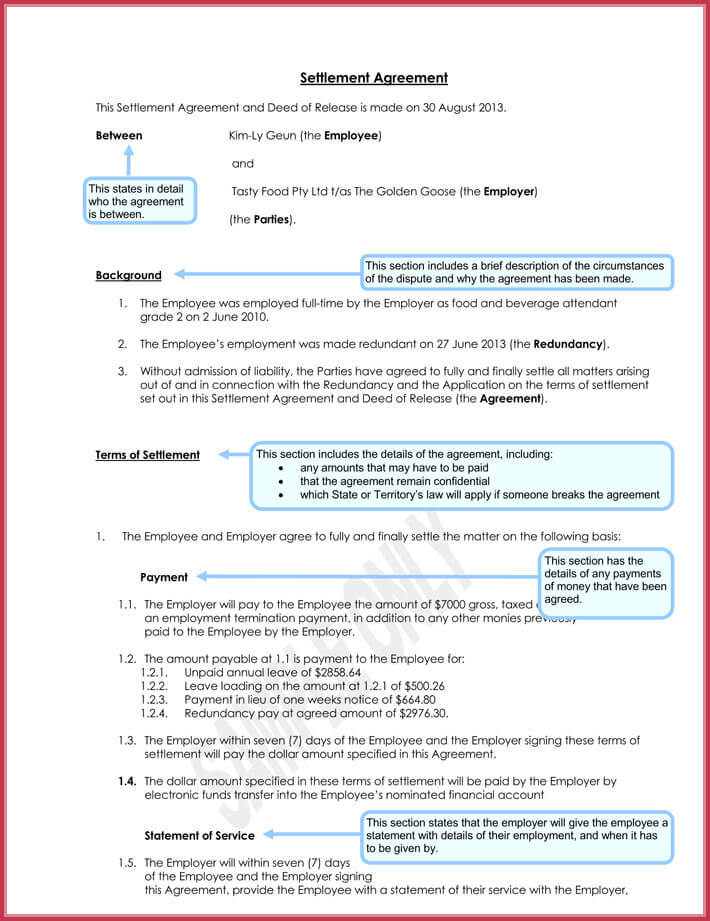 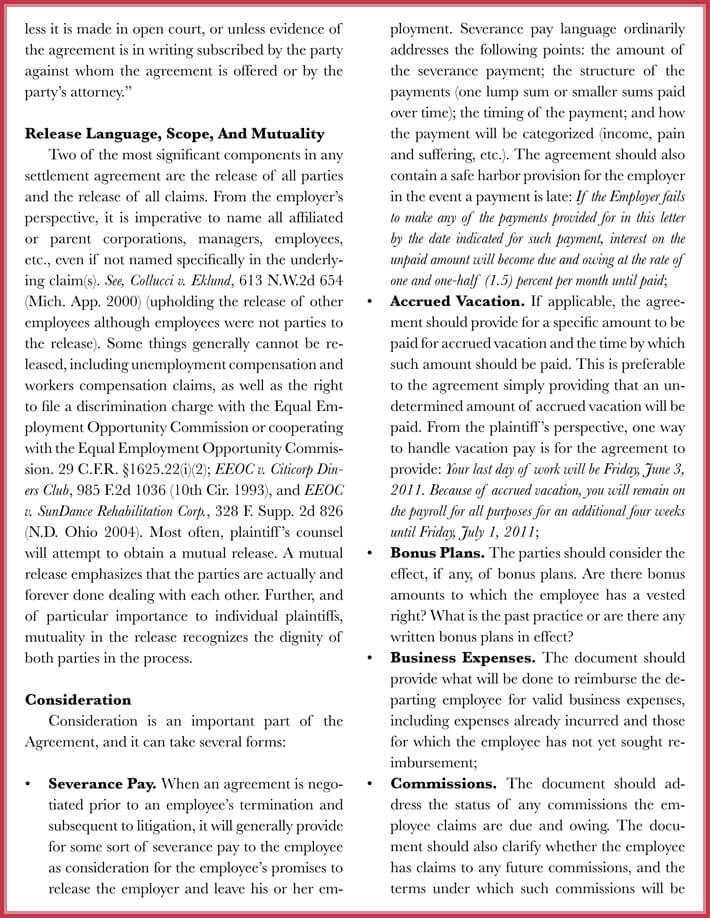 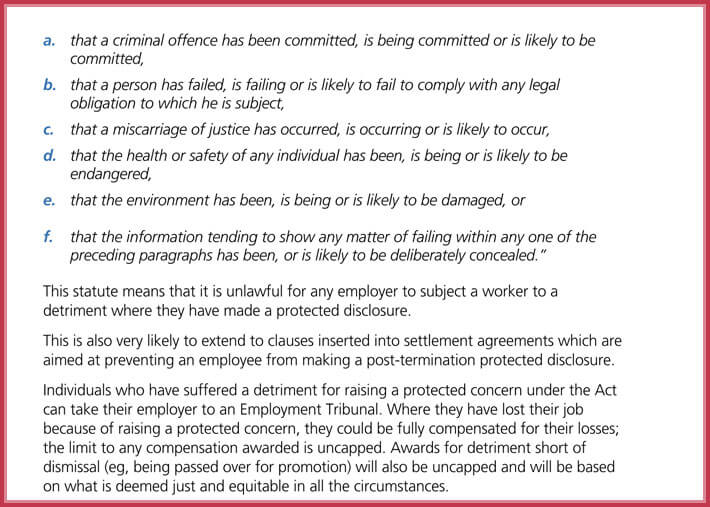 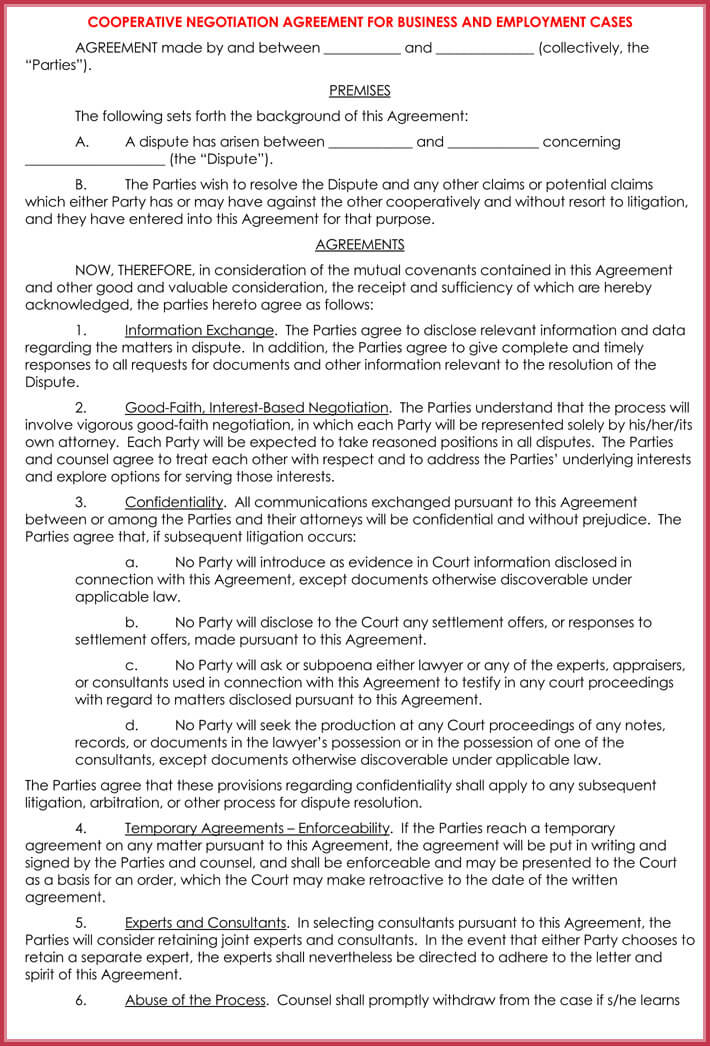 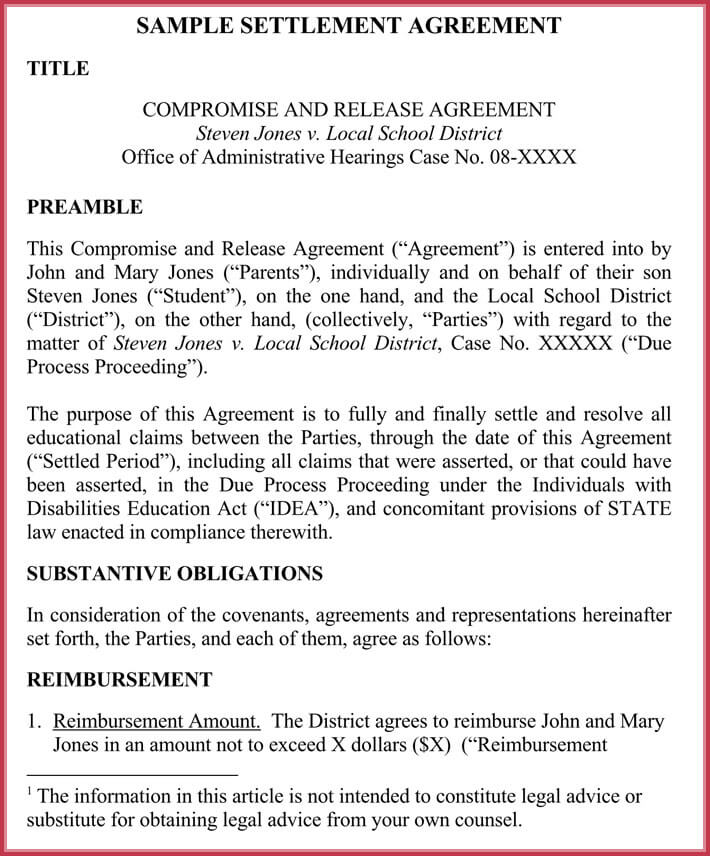 How to Make Sure That the Settlement Agreement is Legally Binding

A key point to note is that, for a settlement agreement to be valid and legally binding, it will need to meet several statutory requirements, including that it must be written and not in soft copy, and must specify the particular complaints which the agreements are looking to settle. To find out other clauses that must be included in a confidentiality agreement, check out our basic confidentiality agreement.

More importantly, the Employee must have been issued advice of the terms and effect of the settlement agreement in advance from an independent solicitor or any other adviser specified in the Employment Rights Act 1996, such as a certified trade union certificate that the adviser must be clearly identified in the Agreement and their advice must be covered by insurance.

If the Agreement does not meet all the statutory requirements, then it will not be a valid settlement and will leave open a chance for the Employee to lay claims against their employer. It is, therefore, imperative that much precaution is taken when drafting a settlement agreement.

Settlement agreements are a useful way of making sure that employer-employee disputes are concluded without the need of either side taking legal action against the other. Nevertheless, the law relating to them can be complex, and it is always a great idea to seek proper professional advice before you begin to go along the settlement agreement route.