A military clause is included in most residential leases, which permits military personnel to break a lease agreement. The clause allows military personnel who are required to relocate for service-related reasons or have their security deposits refunded to let go of their lease contracts before the deal expires. The military clause is offered to employees of the U.S. military and its Reserves and the National Guard.

This clause is a standard provision in leases near military bases, but it does not have to be included in every original lease contract. Having the provision may help landlords reduce vacancies by accommodating military tenants and putting landlords in financial difficulties if a military tenant needs to break a lease. In military lease agreements, the rules, policies, and conflict resolution processes clearly define the responsibilities between the owner and the tenant, which is why they must be addressed in detail.

SCRA protects the veterans who serve on active duty for the nation’s defense and protect their legal rights regarding the property, allowing them to devote their full attention and all their energies to national defense.  It helps them against being taken advantage of or dissipating property while on active duty by prohibiting vehicle repossession, losses of assets in storage facilities, foreclosures, pending court cases, credit card bills, and other penalties. For PCS and deployments lasting longer than 90 days, SCRA is effective.

When a service member cannot break a lease or the landlord refuses to honor SCRA, the best course of action is to reach the nearest Legal Assistance Program office. Information regarding the location of the DOJ offices will be available on the DOJ website. Suppose active service materially affects the member’s abilities to repay any financial obligations individually or jointly entered into before active service. In that case, a member may have the higher interest rates reduced to 6% for those obligations individually or jointly. Besides, the SCRA prevents the lender from charging accelerated interest rates and forgives the excess payments as a result, which means that the member will no longer have to pay these after his or her release from active service.

The coverage of SCRA

Among other military members, the SCRA applies to the Coast Guard, the Reserves, and the Guard in Title 10 active duty. The SCRA also applies to the Public Health Service and the National Oceanic and Atmospheric Administration officers in support of the Armed Forces.  The SCRA covers all 50 states and Puerto Rico, the U.S. Virgin Islands, Guam and the Marianas, and the territories subject to U.S. jurisdiction.

Domicile and taxation under SCRA

Under SCRA, a member may continue to maintain legal residency in the same state he or she lived in before entering active duty. There is no loss of domicile in a state when a member is absent on military orders. Individual members can change their domicile if they meet the requirements for changing their legal residence. A person can have as many residences as he/she can afford, but only one legal residence (domicile).

For income tax purposes, a member does not acquire a new residence solely related to military orders while the member’s presence in the state.  As a result, the SCRA prohibits states from taxing nonresidents’ nonmilitary income because they live in a state with an income tax on their citizenship.

Considerable Requirements to Use the Lease Addendum

An active member of the military may invoke this clause if he or she is transferred permanently. The active member will be required to provide a copy of their official orders to the landlord if they want to terminate a written lease on the books. It is also necessary to submit a written and signed notice of their intention to vacate the property, including all current contact details for the service member and his commanding officer at least 30 days prior to moving out.

Additional requirements for the agreement include a request that all paid security deposits be returned and a request that all copies of the documents be kept before the documents are sent through the certified post with a demand for a signed delivery receipt. Members to whom it applied to have to request protections under SCRA in time, and they are additionally required to demonstrate they cannot afford continuation of payments or tenancy because of active service in writing.

Under SCRA, you must prove that you signed the lease before you entered active duty, that you will continue active duty for at least 90 days, and give your landlord written notice of your plan to terminate the lease along with your military orders. Suppose you signed a lease or rental agreement after signing orders to active duty. In that case, you could still be able to terminate it without penalty under the SCRA if you give written notice to your proprietor and a copy of the orders, preferably with at least a 30-day lead time.

After handing the landlord a copy of the orders, the lease will end on the last day of the following month, following the month in which the landlord received the documents. For example, if the tenant notifies the landlord in January, payment of rent will continue through the end of February. 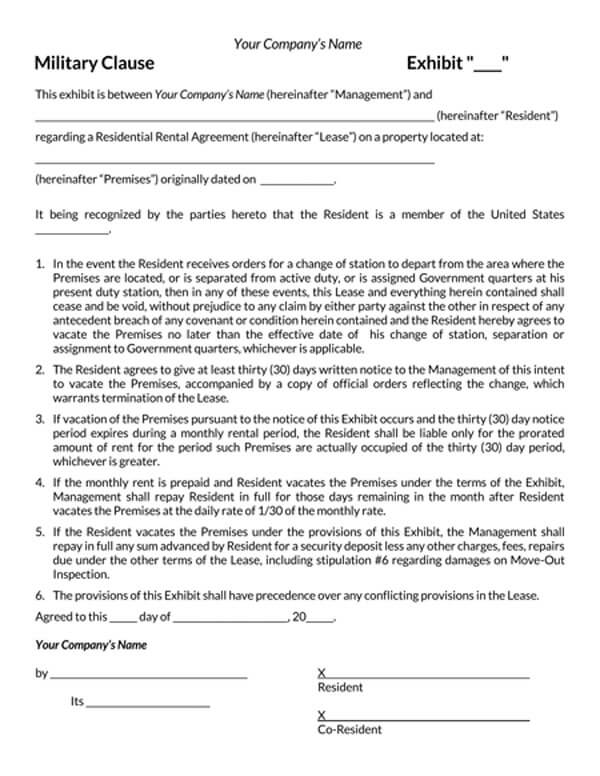 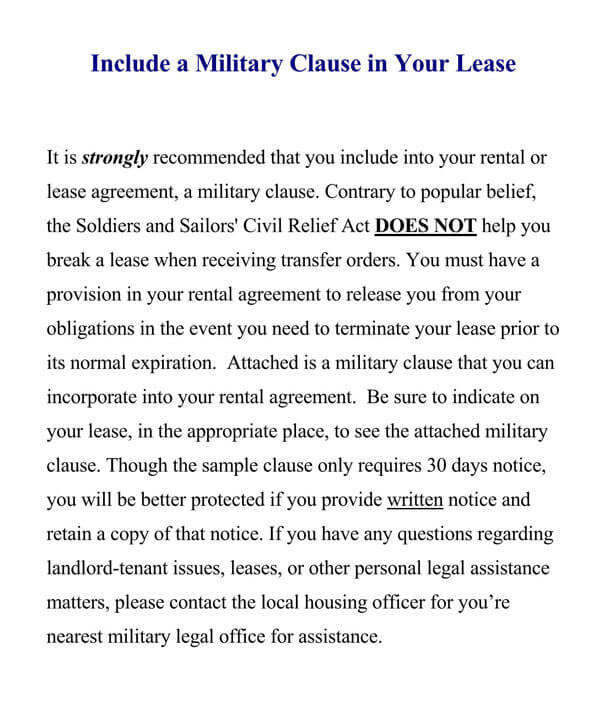 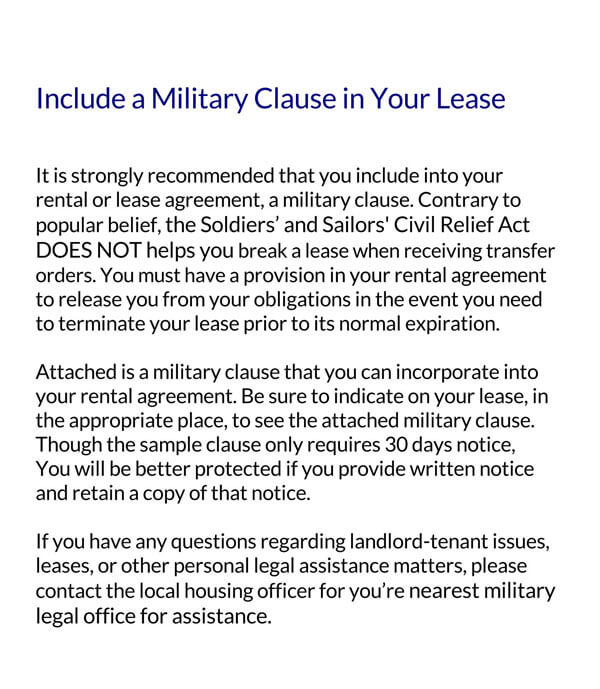 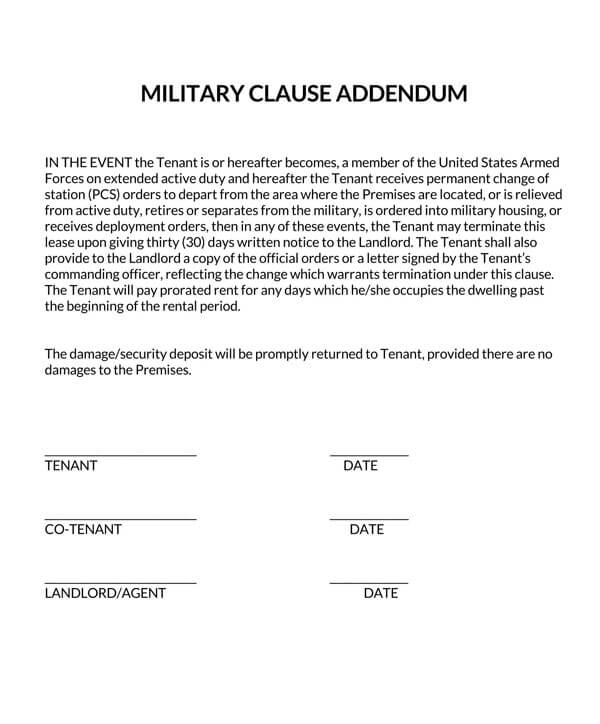 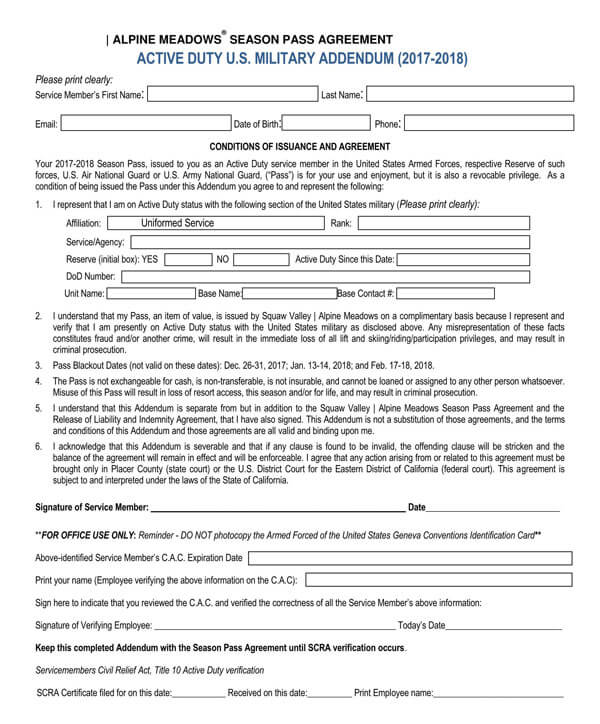 Can a military spouse break a lease

If the person does not list his or her spouse on the lease, the spouse can not break under the SCRA rules. The SCRA does not give service members the right to break their civilian lease due to orders to move on base.

How can I break my lease (SCRA)

If you want to terminate and break your lease under SCRA, you must give your landlord written notice, preferably at least 30 days in advance, and a copy of your military orders.