IOU is the short form of I Owe You. An IOU form is a document written by the debtor to the lender to acknowledge a debt owed. It can be used to set terms of repayment. An IOU is a legally binding document that can be used in court for claims. It functions just like a promissory note; however, a bit less detailed.

Alternate names used to refer to an IOU form include;

The foremost difference between an IOU, promissory note, and loan is the amount of information contained in each document. An IOU is simply a promise to pay a certain amount to a specified person, where else for a promissory note is more detailed and includes additional information such as the steps of repayment.

A promissory note is legally binding by default, whereas an IOU has to be notarized in most cases to hold up in court. On the other hand, a loan is more detailed than a promissory note, and the lender often predetermines terms such as a timeline to repay. Also, a loan is expected to be repaid in fixed installments, where else for an IOU and promissory note, both parties can agree on the due dates.

For most people, their idea of an IOU is a piece of paper or napkin with some words about a transaction scribbled on it. This is due to the misrepresented perception of the document. However, an IOU would ordinarily include very crucial information about a transaction, and the lender can include terms and conditions of payment. Even though an IOU is not too detailed, it is recommended for a lender and a borrower rather than just shaking on it.

Below we shall discuss what to include in your IOU and in what order:

Details of the parties involved

The first item to include should be information that identifies the lender and the borrower. This should include the parties’ names, business or home address, contact information such as email, phone number. The date can be included right above these details.

When coming up with an IOU, you can use certain assigned titles to identify the parties involved in the transaction. The lender can be referred to as the seller, payee, oblige, promise, holder, bearer, service provider, or creditor. Alternative names of a borrower include; buyer, payer, obligor, promisor, debtor, endorser, customer, or debtor. The name you choose will often depend on the type of transaction at hand; for example, for a purchase, buyer and seller would make more sense, or for a down payment, creditor and debtor would be fitting. Try and use the most appropriate name for your situation.

How to pay for goods or services provided is one of the core purposes of an IOU. Therefore, payment information should be the next thing you outline in your IOU. When tackling payment information, you should include the total amount of money owed, the minimum allowable payments, the expected dates of payment, interest rates where applicable, for example, in case of late payment. Additionally, an IOU gives the creditor and the debtor liberty to declare their preferred methods of payment, whether it is cash, checks, bank deposits, or online payment.

As this is the focal section of the IOU, you can include as much information as you prefer as long as it improves the agreement. This could include information such as the frequency of payments, e.g., monthly, weekly, etc. within this section; you can include terms and conditions that either party would wish to declare, such as fines a statement that the creditor shall not harass the debtor as long as payment is still being made as per the agreement.

Signatures of the lender and the borrower

The next items to include are the signatures of the lender and the borrower. Like any other document, an IOU requires signatures from both parties to be legally binding. Each party should ensure the other indeed signs; else, the document would not be valid should worse to worst, and the matter ends up in court.

Any details of termination

Sometimes things could go the way you did not intend them to and thus necessitate the termination of the IOU. Therefore, a clause addressing how to handle termination can be included. Here you proclaim what would happen should the debtor default on the payment. Will the creditor take ownership of collateral? Will there be an additional fee? Or the debt’s acceleration, for example, through legal action?

A witness(es) is required to validate the IOU; parties can opt to use a notary public as their witness. This consequently makes a notary public’s signature the last component to include in your IOU. A notary public’s is a requirement in some states, so it is important to first confirm the requirement guidelines within your state before agreeing to the transaction. However, even if it is not required in your state, it is advisable to notarize your IOU in transactions involving a lot of money.

The Consequences of Not Using an IOU

An IOU protects the lender by ensuring the debt is legally validated and the borrower from being exploited by being asked to make payments just because the lender needs money urgently or pay more.

An IOU ensures both parties agree on a convenient way to handle a debt.

Some of the consequences of not using an IOU include;

Generally, it might be hard to enforce a verbal promise as it can be taken as a case of hearsay; the lender said, the borrower said. If the agreement was not documented, either party can decide to change their terms or deny their initial statements, which might end up being a major dispute that could have been avoided if only the agreements were documented in an IOU.

Legal counsel is usually expensive and even greater if the case involves undocumented transactions. Cases that are based on just promises can be hard to defend in court, and the lender can end up not recovering the money owed despite having incurred lawyer fees. Alternatively, the borrower could end up paying more than they owed and at the same time losing money after paying legal fees.

Disputes that would emanate from lack of an IOU to document how debt was to be handled can end up costing both parties their friendship or family trust.

Transactions that involve huge amounts of money can eventually end up being violent if the parties do not agree. An IOU helps avoid this by stating who owes what amount of money and to whom, thus ensuring no disputes will arise, consequently guaranteeing the personal safety and wellbeing of the involved parties.

Online Templates are an easy way of making the task of easier and faster so we are providing a collection of IOU Forms for your project. You can download free templates here. 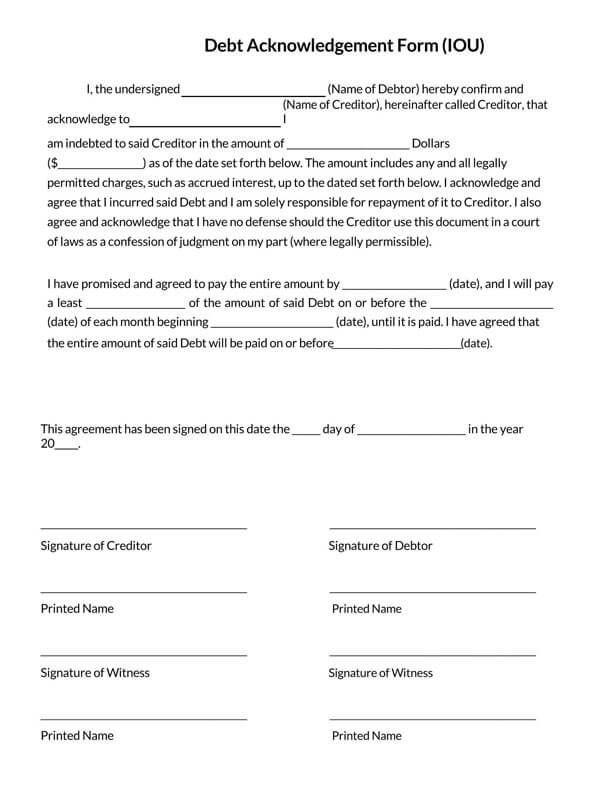 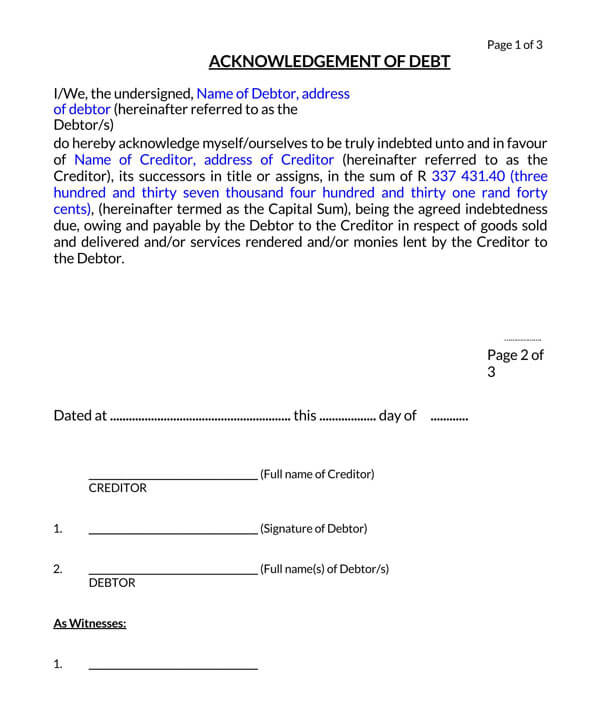 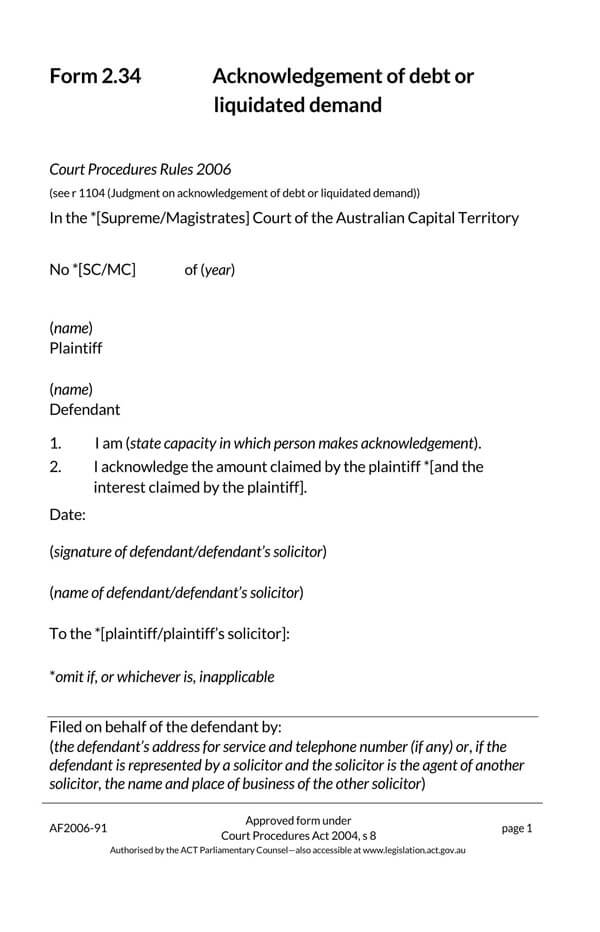 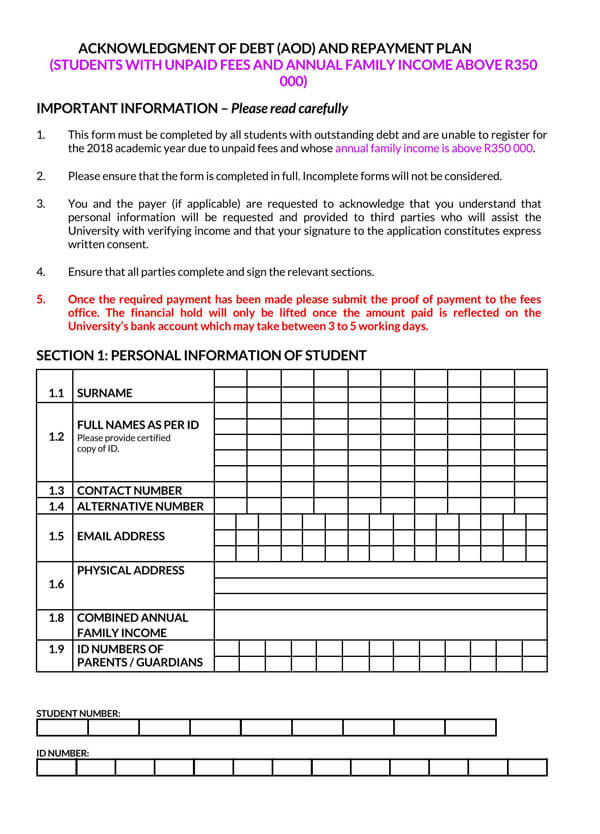 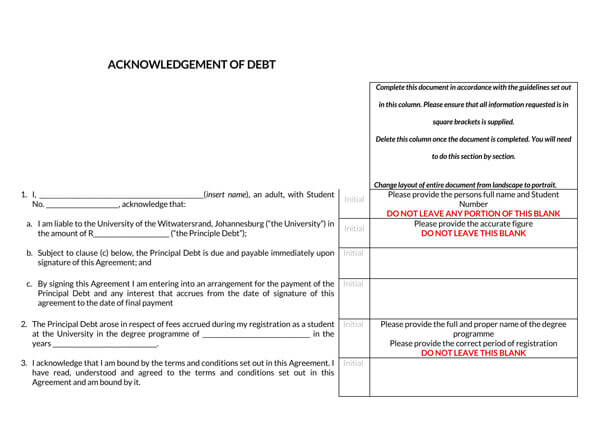 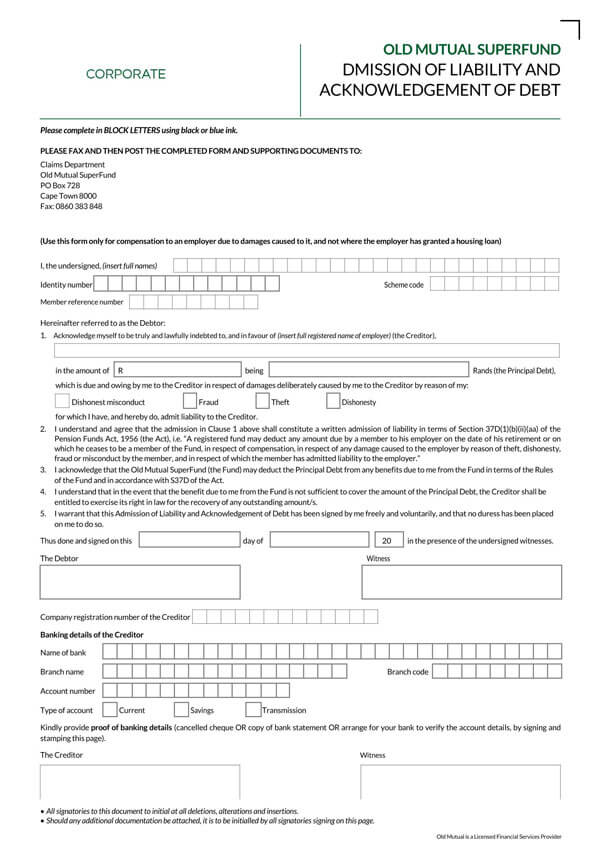 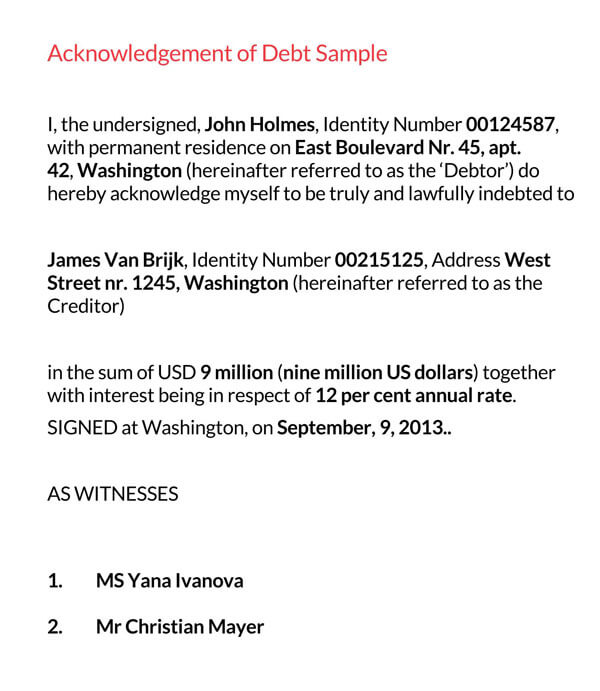 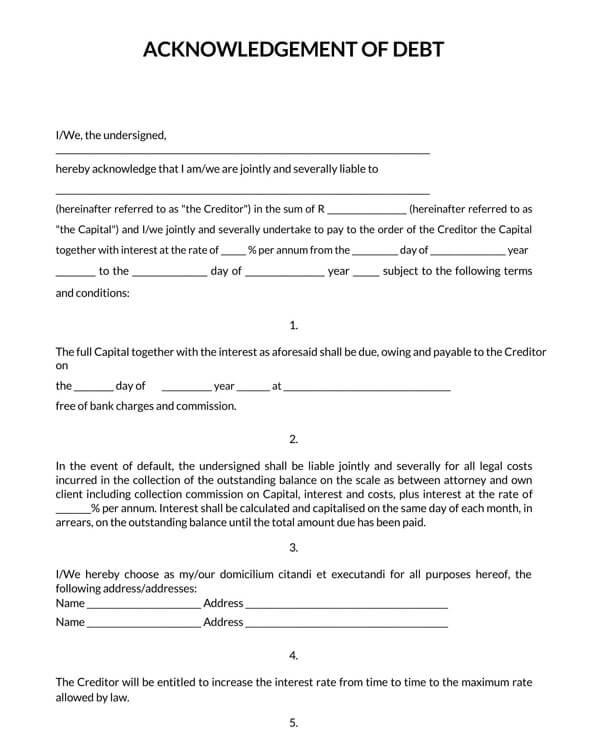 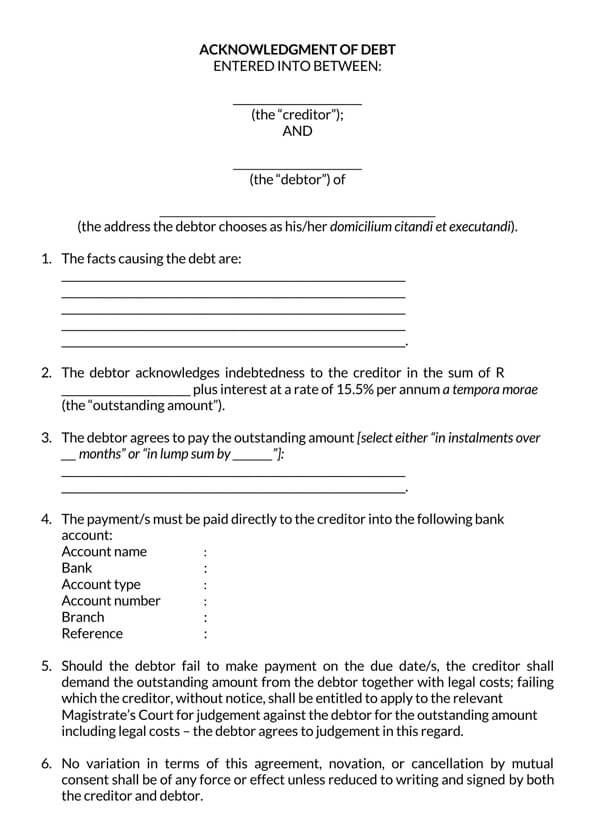 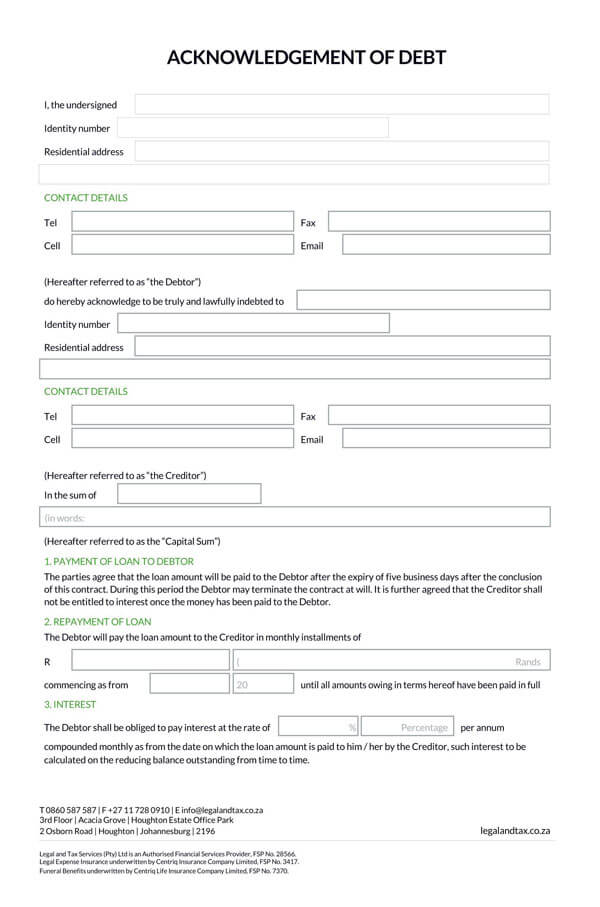 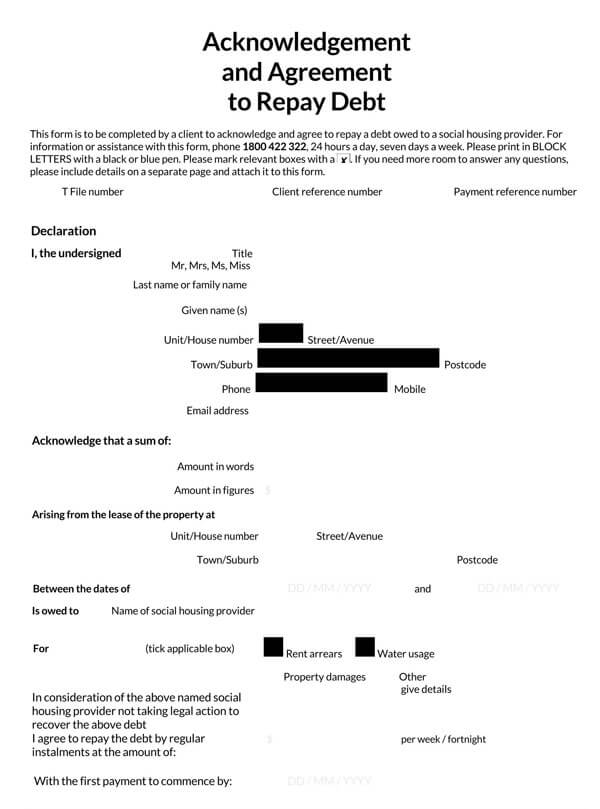 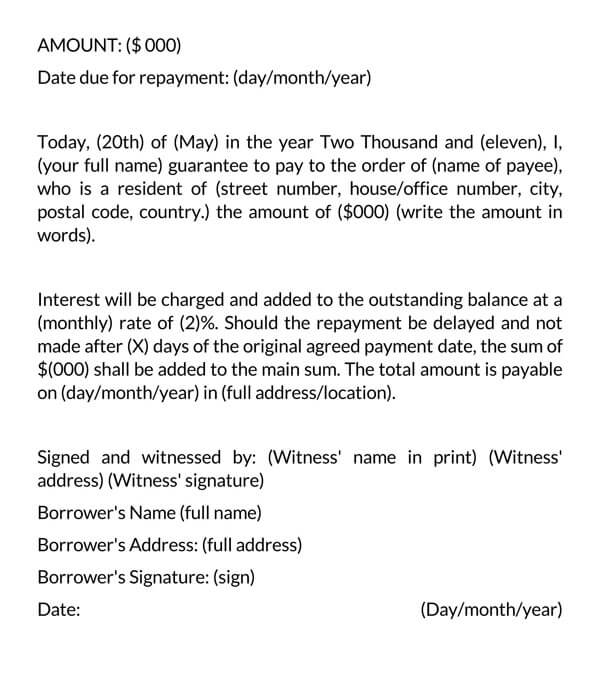 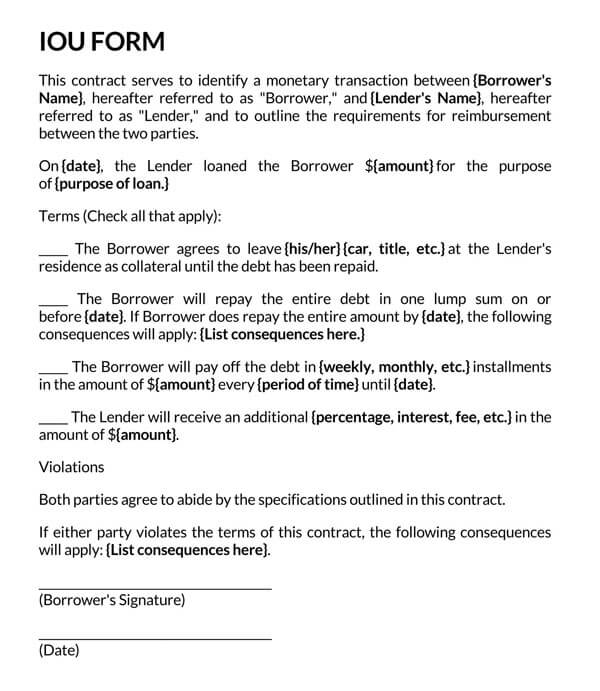 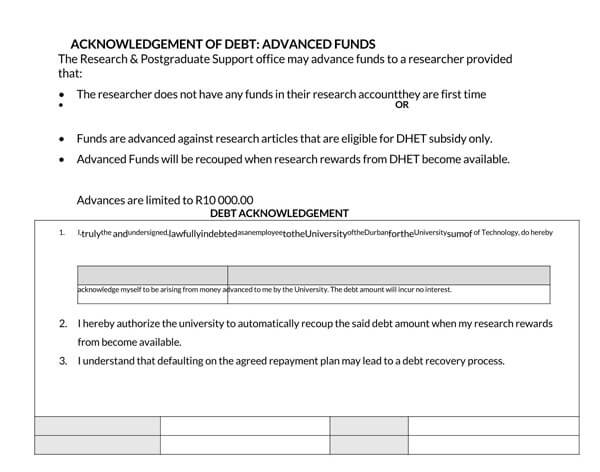 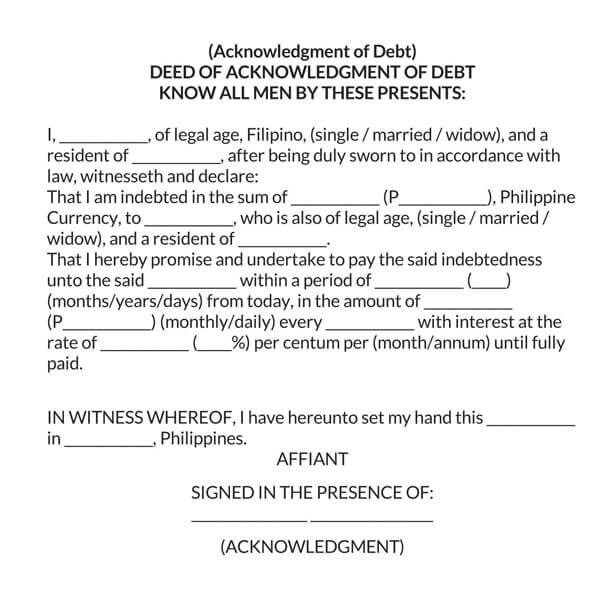 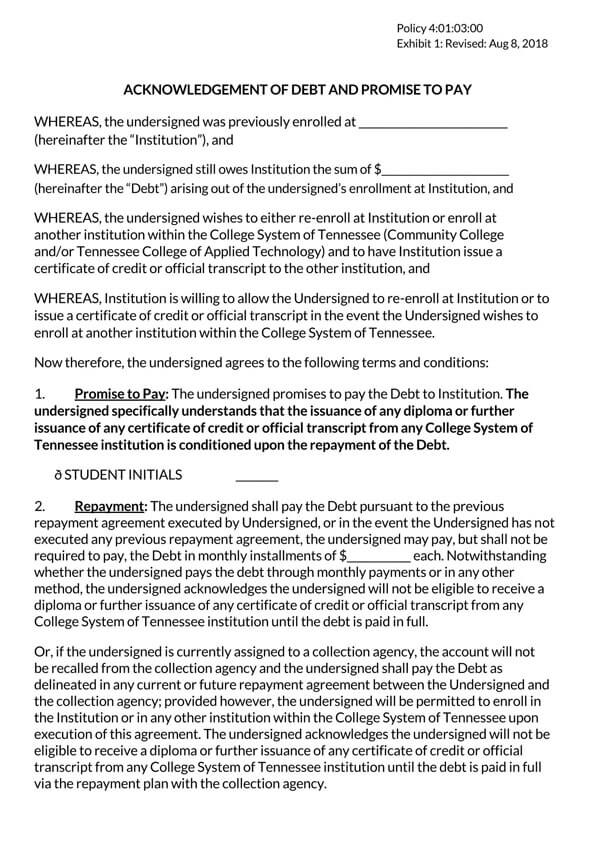 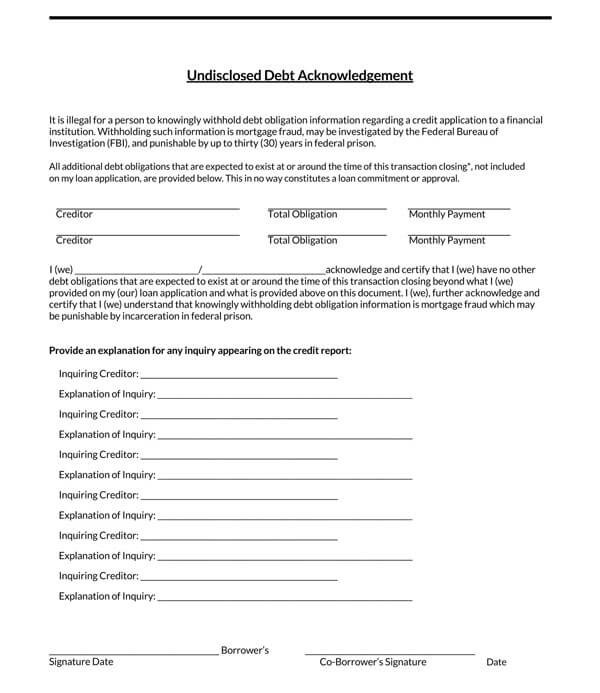 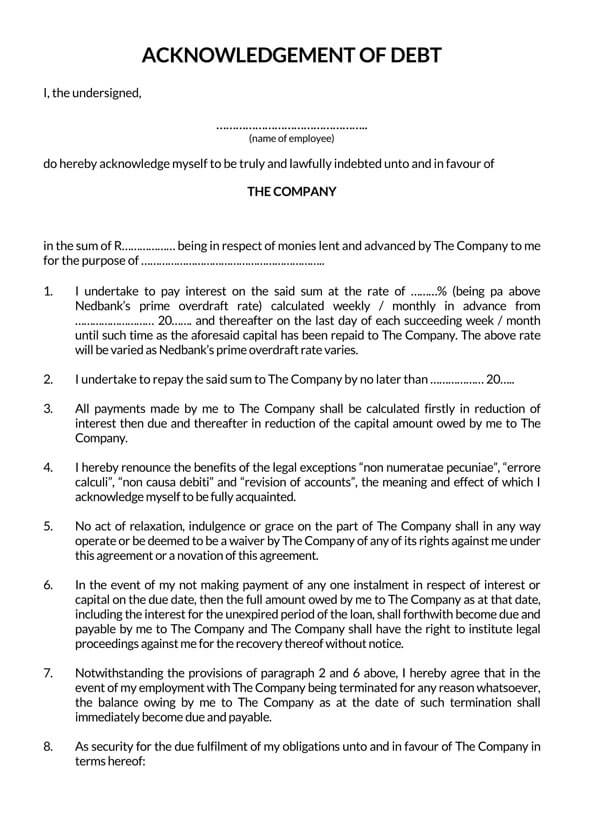 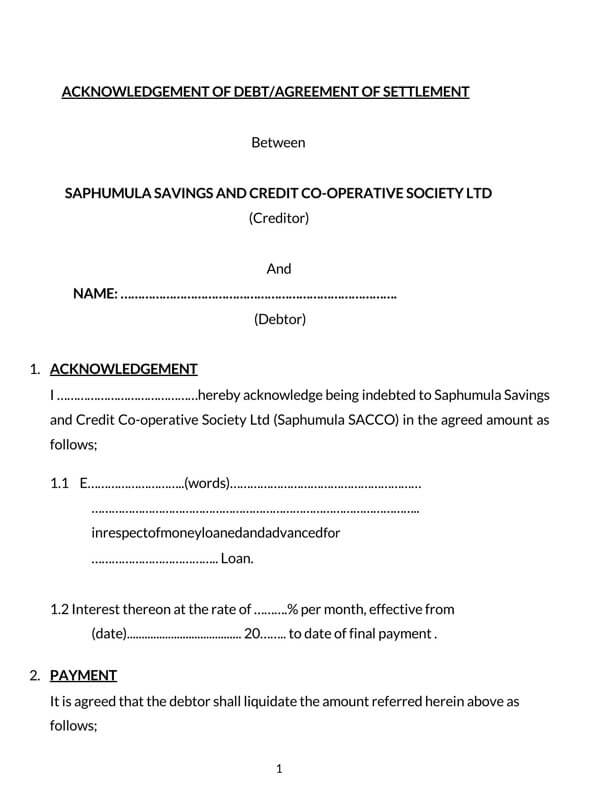 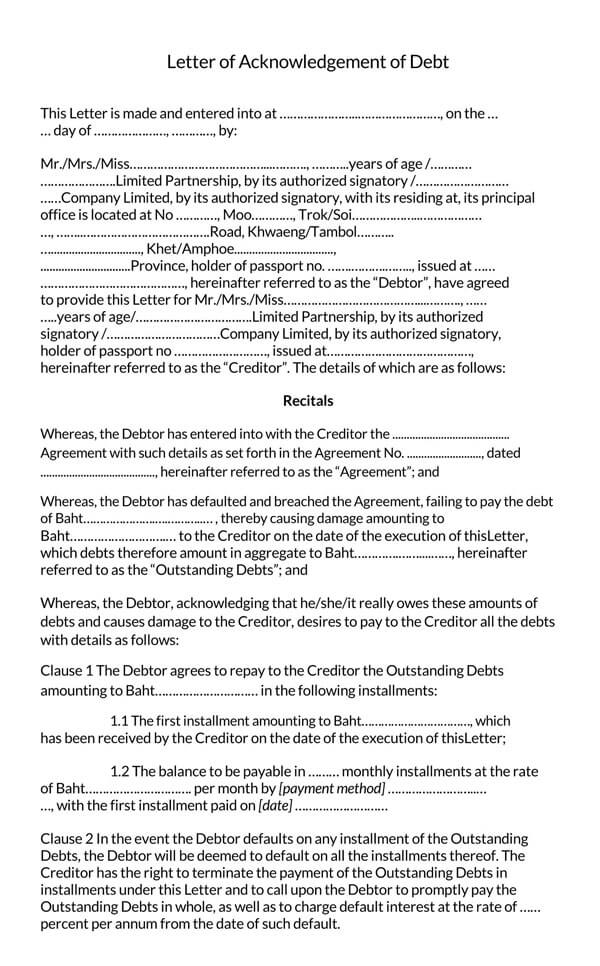 Does an IOU stand up in court

Yes. However, this is dependent on the borrower signing the IOU. A signed IOU works as good as a promissory note as evidence in court, just with lesser information.

Does an IOU contract need witnesses or to be notarized

For an IOU to be legally binding, both parties have to sign. However, this might not be enough in some states, and a witness or notary public is required to sign to validate the agreement. Regardless of your state guidelines, it is recommended that it be notarized at any one point.

Why do I need a formal IOU Agreement

An IOU is recommended whenever you wish to lend or borrow money and choose not to document the transaction in other ways. Since an IOU is legally binding, it protects the lender from being duped and the borrower from being exploited to pay more than they owe. An IOU can be presented in court as evidence should the debt bring forth issues that end up in court.