In the course of home buying, things do not always go as planned. You may encounter roadblocks along the way, so you need to be aware of your options. Failure to act on this information can result in more expenses, especially when you change your mind halfway through the purchase process.

On the downside, if you decide not to go ahead with a purchase, you may lose more than you expected. However, you can recover your earnest money if you choose not to purchase the house. It’s relatively straightforward, but you must know what you are doing. First, you need to get acquainted with what earnest money is and how to get a signing release form.

What Is Earnest Money

When buying a house, either through a real estate agent or company, you need to show your interest and seriousness. Usually, several people can have their eyes on one property at the same time. Real estate agents and companies don’t always work on a first-come-first-served basis. So, to prove your commitment, you can make an earnest money deposit into an escrow account.

Earnest money deposits favour both sides of the transaction anyway you look at it. The seller gets to focus on the serious buyer instead of wasting time with other potential buyers. If the property in question is located in a prime area with a high population, the number of potential buyers increases. Earnest money helps to single out the most likely customers for the seller.

On the other hand, the buyer gets to reserve their dream property and cut off most of the population. It also gives you time to conduct adequate appraisals and inspections before closing the deal. The most important reason for the earnest money deposit, however, is that it gives the buyer an out in case the house doesn’t meet their expectations.

Most earnest money deposits are made before signing the final contract, so the buyer has ample time to thoroughly inspect the house before making a final decision. If the inspections bring up issues that the buyer can’t accept, then they can get a refund.

Earnest money is usually less than 5% of the property’s price, and real estate agents only collect from the party that is ready to commit. The money sits in an escrow account until the contract is finalized.

What is a Release of Earnest Money Form

Once you back out of buying a property, you have essentially broken the agreement that was solidified by your earnest money deposit. But, you can get your money back if you request it within the accepted deadlines. Before paying the deposit, the buyer and seller have to agree on the conditions that allow the buyer a refund. Some eventualities allow you to access your deposit as long as you request it within the deadlines.

Primary Components of a Release of Earnest Money Form

The earnest money release form is made up of a whole lot sections and the components of those sections would be discussed in this part. It would enable us understand how to draft up a well written Money release form.

The date section starts the document, as usual. It is important to include the correct day, month, and year on which the form is filled. The date format is generally yyyy/mm/dd.

The Name of the Buyer

The buyer’s name section is compulsory on a release form. You must write down the name exactly as it is written in valid identifications and bank information. If the property has more than one buyer, indicate that and provide enough space for each one to write down their name.

Name of the Seller

The next section should be the name of the seller as it is shown in a valid identification. As in the case of the buyer, multiple sections should be provided if there are multiple sellers.

The contract signature date refers to the original date on which the buyer and seller signed the first contract. It follows the same date format as the current date to avoid confusion.

The name of the Escrow Agent

Since the earnest money is to be held in an escrow account, some people prefer to have an escrow agent who acts as the holder of the escrow account. If there is one, then there should be sections for their names and signature if needed.

The section for property details is very important, and it requires attention to avoid future problems. Include as much information as possible on the form, such as zip code, address, street address, city, etc. Make sure you write all the relevant information you can get on the property because an omission can affect your claim negatively.

The Receiver of Earnest Money

The receiver of the earnest money is the buyer or buyers. This section should contain all the information on the receivers, such as their bank information, personal information, etc.

The only signatures required on this form are from the parties that were filled in the previous sections.

An earnest release form is quite different from a lot of other money release forms you may find. It has a specific format that involves explaining each part of the form in clear language that can’t be misconstrued. Having the correct information is only one part of filling a release form.

Your form has to start with a short passage explaining the reason for the form. It is an introductory passage that leaves gaps to be filled by the current parties involved with specific information. What you put in this passage has to be clear and straight to the point.

Your passage has to contain the day, month and year. Then, the next space should contain the buyer’s name. Create as many spaces as possible to accommodate multiple buyers. Next, include the seller’s name, and then the date of the original contract. The next blank space should contain the property’s address, including the city and state. You can also skip writing the names if you write them at the end too.

Define the actions to be taken with earnest money

First, include a blank space to include the escrow agent’s name. From here, you can make any demands concerning the earnest money. The earnest money release forms will have options for distributing the money, and all you have to do is check the boxes of whatever directive you want.

With this section, you can release the money to one party, multiple parties, and even the buyer and seller. Another important section to fill is the exact amount of money to be disbursed. You can specify what amount you want either party to receive from the escrow agent.

The buyer’s and seller’s signatures

The signatures of the buyer and seller are the final part of the earnest money release form. The buyer signs first, and then the seller. The signature section contains three blank spaces for filling their signature, date, and name — in that order. The buyer and seller names have to match the names filled at the beginning of the form, and there should be enough spaces to accommodate multiple buyers and sellers as in other sections of the document.

Creating an earnest money release form from scratch is possible; just unnecessarily time-consuming. Instead of making one yourself and making a mistake, you can get ready-made templates from us. All you have to do is edit the relevant areas and print out a template in a lot less time. 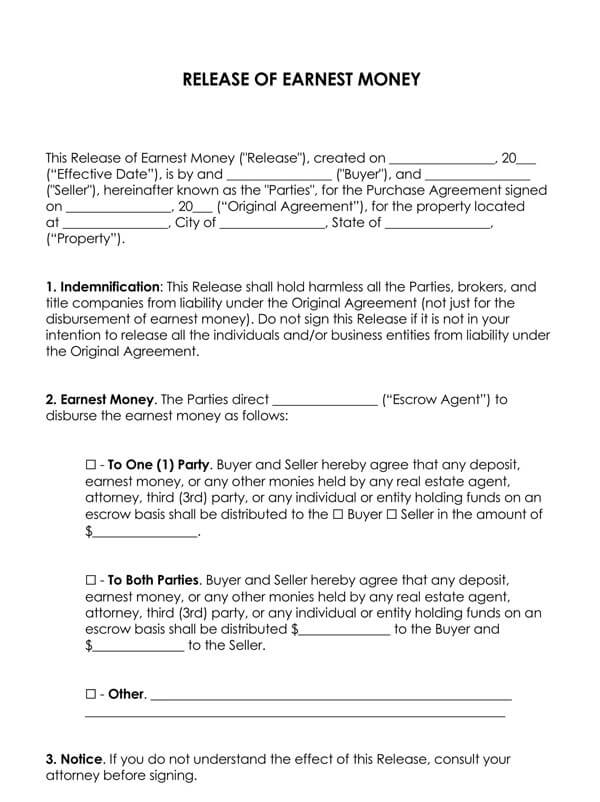 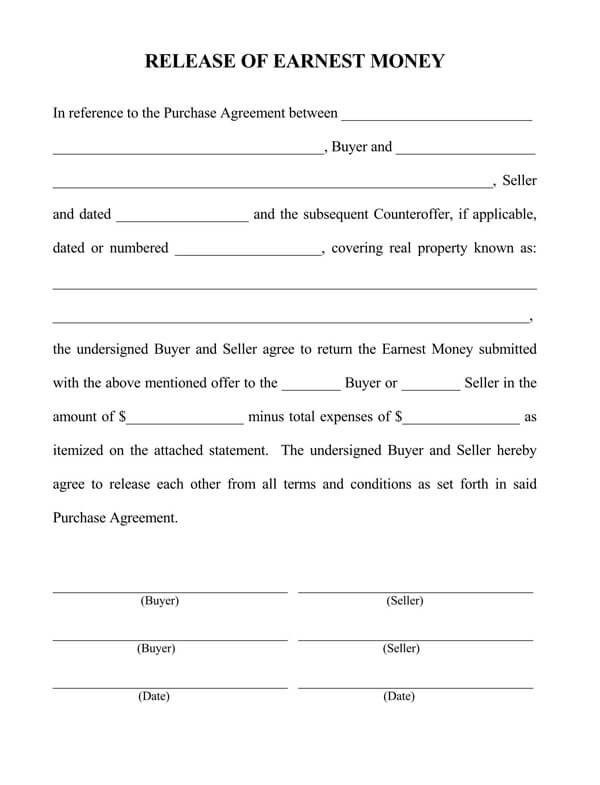 An SPA is a sales and purchase agreement between two parties, the buyer and seller. An SPA acts as a contract that holds both sides to a transaction, and it is legally binding. In real estate, buyers and sellers don’t usually conclude a transaction without having an SPA between both parties. You can find SPAs in other business transactions, and they are equally binding.

In simple terms, an SPA holds the buyer to the promise that they will buy, and also holds the seller to the same promise of selling. So, it completes the conditions required for a transaction to occur, and it comes at the end of negotiations and bargaining.

No transaction can hold until both sides have agreed on the terms of service and price of the product. So, an SPA comes in to streamline the process. It contains all the details of the transaction, including the buyer and seller’s information. It also contains information concerning deposits, date of the final sale, and fulfilled promises.

Universal rules regarding the release of earnest money according to SPA

There are some rules that guide the Earnest money release forms according to the SPA and a few of them are hinged on the customer protection.

How refunds are handled if there is a cancellation fee

If the buyer backs out

A buyer can back out of a sale for many different reasons. Sometimes, they may discover something about the property that doesn’t match what they want. They may even find faults in the building structure. The universal rule for these cases differs in many instances. If the buyer finds something that violates the agreement, then they get the earnest money deposit back. If they back out for an unrelated reason, then the seller usually gets the money.

Parameters to determine if the money is returned

When dealing with a company instead of an individual, the agreements are less flexible. Companies or brokers have usually fixed agreements that buyers have to agree on before making their deposit. As a buyer, you need to go through the terms and conditions before agreeing; preferably with a lawyer.

When Should a Real Estate Broker Release Earnest Money

While these factors differ from case to case, there are certain times when a real estate broker has to release the earnest money back to the buyer.

These situations are generally accepted, and they work with deadlines:

Appraisal contingency: Homes need to get an appraisal to determine their value before they get sold. If the house gets appraised and is valued at less than the agreed price, then the buyer can request a reduction in the price. The seller then has to agree to reduce their price or return the earnest money to the buyer.

Funding contingency: Buyers who are denied loans to pay for the property can request a refund of their earnest money deposit.

Home sale contingency: Sometimes, people deposit earnest money before they can sell their current home, in order to hold their proposed house. If they encounter difficulties regarding the selling of their house, they should get a refund.

How long does it take to release the earnest money?

Since the money is kept in an escrow account, it can’t be released until all the required checks have been made on it. So, it can take up to 15 to 20 business days to arrive.

What happens if the defaulting party in the contract fails to release the escrow money?

Escrow money can only be released when both parties sign the release form. If the defaulting party refuses to sign or object to the form within 15 days of getting the form, the escrow agent can disburse the money to the correct party. Alternately, a defaulting party who opposes the agreement made earlier can get sued by the other party.

Can a broker keep Earnest money?

No, they can’t. Earnest money is always kept in a third-party escrow account. Meanwhile, a similar deposit called the good faith deposit allows the broker to keep the deposit.

An earnest money deposit can be the saving grace when you can’t afford to lose a property to other buyers or waste time with buyers who aren’t ready to commit. And, if the deal goes bad, there is a chance of getting a refund, depending on the cause. No one wants to lose out on a great property, and earnest money opens up the options for both buyers and sellers.